When I was looking to finish off my run of Thurman Munson Topps cards I turned to eBay for the final card I needed, which was his 1976 card. For some reason that card seemed to carry a premium, so on eBay I found it paired with another 1976 Topps card and made the purchase. The other card was this 1976 Rookie Pitchers card featuring Ron Guidry. 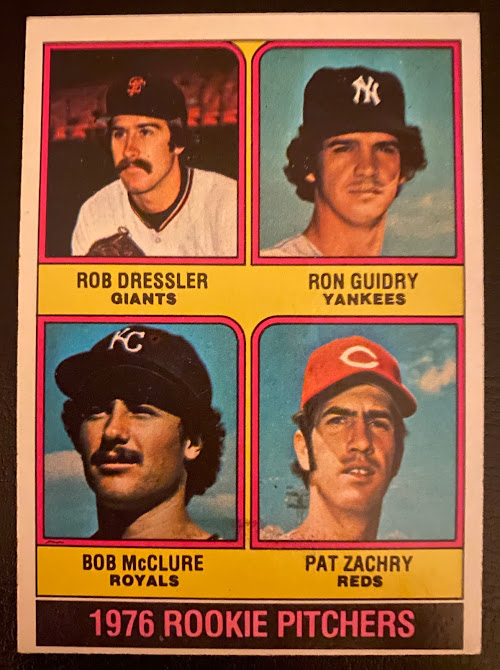 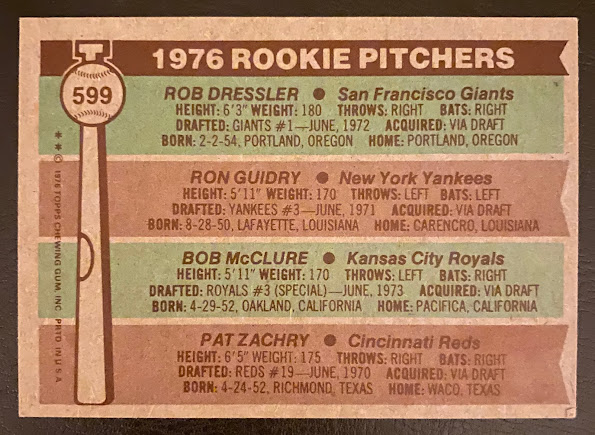 Guidry was a month shy of his 25th birthday when he made his major league debut in 1975 and only pitched 31.2 inning in the 1975 and 1976 seasons. Guidry started the 1977 season in the bullpen, but made an emergency start on April 30th in place of Mike Torrez who the Yankees had just traded for, but had not yet been able to join the team. The Yankees beat the Blue Jays 3-0 and Guidry would finish the year with a  16-7 record and a 2.82 ERA. He was even better in 1978, posting an astounding 25-3 record with a minuscule 1.74 ERA leading the American League in both categories and striking out 248 hitters, which was a then Yankee record. His efforts would culminate in winning the Cy Young Award and the Yankees went on to win the World Series.

Guidry would win 154 games between 1977-1985; which was more than any other pitcher in baseball during that time. He would lead the league in wins (1985) and ERA (1979) again. He was an excellent fielder and won 5 consecutive Gold Gloves between 1982 - 1986. Injuries during his later years and a late start would squash his chances at the Hall of Fame, but he was one of the most dominant pitchers over a nearly a ten year period.

His career numbers do stack up nicely compared to a couple of other Hall of Famers including Lefty Gomez and Sandy Koufax, minus the strikeout total of Koufax, but the Louisiana Lightning only garnered a high of 8.8% of votes needed to enter Cooperstown.

I never saw him pitch, but looking at his numbers it seems like he should have gotten a few more votes. What say you? Is Guidry Hall of Fame worthy?