How it started - How it's going

A week or so ago I started noticing a trend on Twitter, How it started vs. How it's going. I'm not sure where this started, but Scott from Sports Cards Ate My Brain sent me two cards that fit this perfectly. 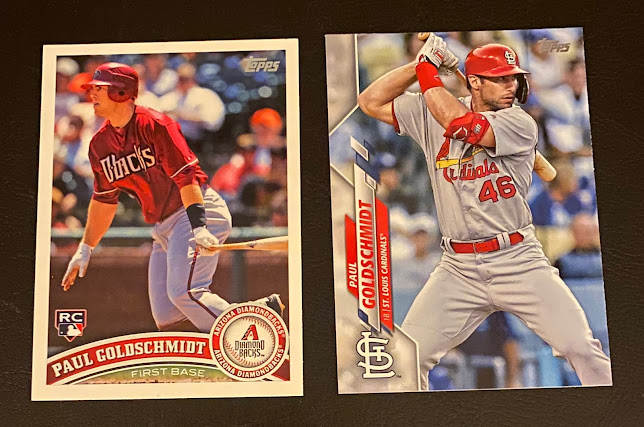 I have the rookie card already, but I will happily take multiples of this card. The 2020 Topps is new to me though and much appreciated as well.
Let's take a look at the differences. The biggest difference is that he's on different teams. You can't tell from the cards, but Goldschmidt changed numbers when he moved to St. Louis. 44 was taken by pitcher Luke Gregorian, who had a 7.11 ERA in 12.2 innings in 2018, the year prior to Goldschmidt joining the Cardinals. 45 was retired by the Cardinals in honor of the late Bob Gibson, so Goldschmidt opted for 46. The other difference from the front of the card is the helmet. At some point Goldschmidt moved from a traditional helmet to the one he is wearing currently with the face mask. This may have occurred after being hit in the head during Spring Training in 2018.
If you look at the back of the cards, the difference is an inch and 5 pounds. The curious part is that it appears Goldschmidt has shrunk from 6'4" down to 6'3" and increased from 220 to 225 pounds.

So how has my Goldschmidt collecting changed between 2011 and 2020? I remember watching Goldschmidt during his MLB debut against the Giants getting a hit in his first at bat and watching him hit a home run in just his second game off of Tim Lincecum. During his rookie year, the Diamondbacks made the playoffs and Goldschmidt hit a grand slam against the Brewers, even though the Brewers ended up winning the series because they had Ryan Braun who was on steroids at the time.

I was hooked on Goldschmidt from his debut on and the fact that he is one of the humblest and nicest human beings on the planet made it that much easier to make him the focus of my collecting from that point. When he was traded to St. Louis I decided I would continue to collect him, but only focus on his cards as a Diamondback. I only have a few cards of Goldy in a Cardinals uniform. A couple have been pack pulled and I have one or two from dime boxes. I've gotten a couple bloggers, including this 2020 Topps card. Thanks again Scott!