1951 Bowman contains some iconic rookie cards. Willie Mays and Mickey Mantle each debut in this set. Mantle's teammate and friend, Ed "Whitey" Ford also has a rookie card in the set.

The Batter's Box card shop had two of them recently. They now have none. I went in last weekend with intent to purchase one or both. One had just sold to one of the guys that works in the shop. In fact he made a second payment on the card and took it home with him while I was there.

The reason I considered getting both was because they were so different that I couldn't decide which one to get. You can see mine below. The condition is rough, but I'm okay with that. The condition of the other copy was a little better except that it had stains all over the front of the card. I asked the shop owner about the stains and he confirmed what I thought. The stains were from the plastic of some really old pages that the card had once been in. The centering was a little better and the colors were more vibrant, but it had these stains all over it. I wish I had taken a picture of it. 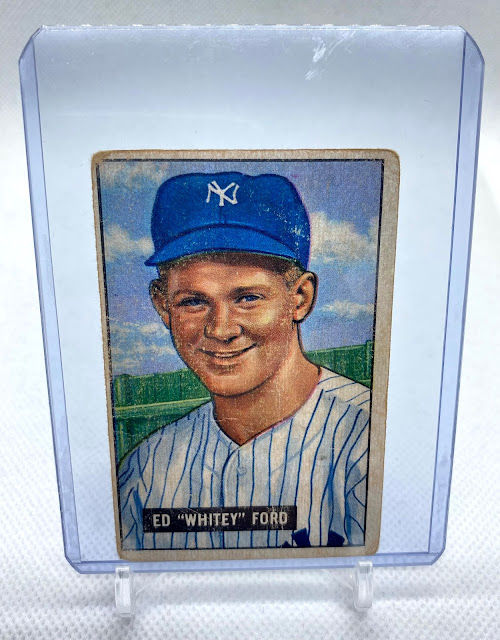 I've mentioned before how much I love the card backs on the early Bowman releases. This card is no exception. Love how they talk about his military service. Can't even imagine something like that happening today. 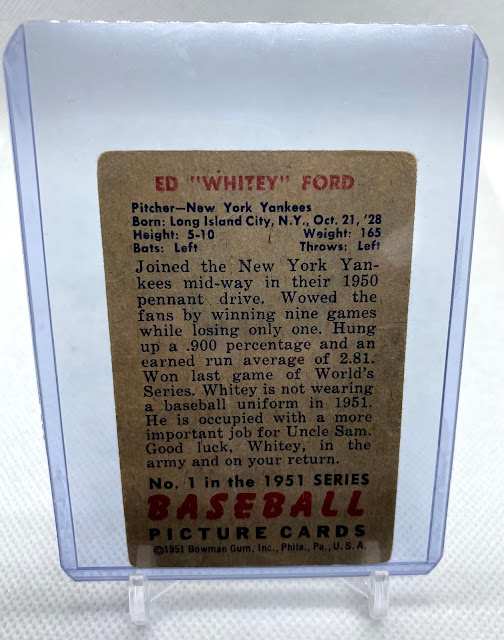 I got a good deal. At least I think I got a good deal. I asked and got a bit of a discount on the sticker price and was able to take this home for $125.
So while I don't have the Mays or the Mantle, I was happy to add this rookie card of a Hall of Famer to my collection. And specifically to my collection of 1951 Bowman cards. I now have Ford and his battery partner Yogi Berra, a Nelson Fox rookie card and Ralph Branca and Bobby Thompson as well as a few others.

This card will go down with my 1954 Hank Aaron, 1968 Nolan Ryan and Johnny Bench, 1969 Reggie Jackson rookie cards as one of the cards that I dreamed about owning as a kid, but never thought it would ever happen. Lots of cards still on that list though. Which one will be next?

How about you? What cards did you dream about owning as a kid, that you now own. Which ones are still on your list?

Posted by Daniel Wilson at 8:43 AM