Showcasing some of the best things in my collection.

I've had my eyes on this card, or a version of this card for a while now. It's a 2015 Triple Threads patch card featuring Paul Goldschmidt, Chris Owings, and Yasmany Tomas. Like I mentioned there are a few versions of this card, but this version has patches and is numbered 7/9.

Paul Goldschmidt is the face of the D-Backs franchise and the Yasmany Tomas is owed so much that I don't think he's going anywhere soon, but Chris Owings' name has been mentioned a lot this off season. He might end up getting moved before the season starts. 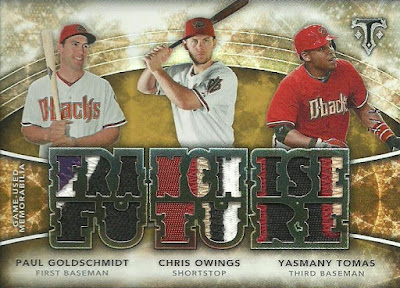 I recently joined a Facebook group called Kgsportscards and someone put this card up for sale for $20 shipped. I offered $15 and he accepted. I added $1 to cover the PayPal fees, so it cost me $16 shipped and think I got a pretty good deal. I was a little nervous purchasing it outside of ebay, but the seller was great. I bought on a Friday and got it on Monday.

Anyone else out there a part of any sports card Facebook groups?
Posted by Daniel Wilson at 7:00 AM