I got an 8 x 10 back today from former D-Backs catcher Robby Hammock. Hammock played for the Diamondbacks in 2003 - 2004, 2006 - 2008, and 2011 according to his Wikipedia page. To be honest I only remember him the first time around; 2003 - 2004. He actually caught Randy Johnson's Perfect Game against the Atlanta Braves on May 18, 2004. I've had the 8 x 10 since 2004 and figured I'd give it a shot via ttm. I found out that he is currently working for the D-Backs and so I sent it to Chase Field. On the Diamondbacks web site it lists Hammock as the "Minor League Manager Short Season - Missoula". I got it back signed very nicely in 16 days. 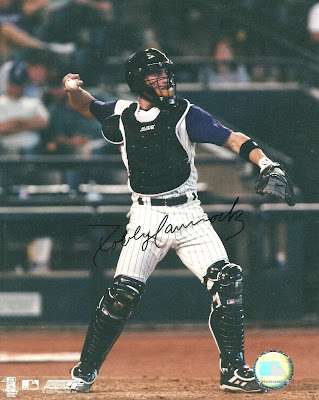 Posted by Daniel Wilson at 9:42 PM