Back in December I grabbed this 5 card Hank Aaron lot from a seller in a Facebook group that I'm in. I've actually bought several different lots from this seller in the past couple of months. he has a ton of well loved vintage at great prices.

I have a goal of collecting every Topps Hank Aaron card from his playing career and this lot has several cards I needed. Even with rough condition and a couple of dups, I couldn't say no at $4 per card. At $20 shipped, it's less than the price of a blaster (no tax) and I didn't even have to leave my house.

Let's start with the oldest and work forward. There weren't any cards from the 50's, but this 1961 Topps card highlights Aaron's 1957 Most Valuable Player award. 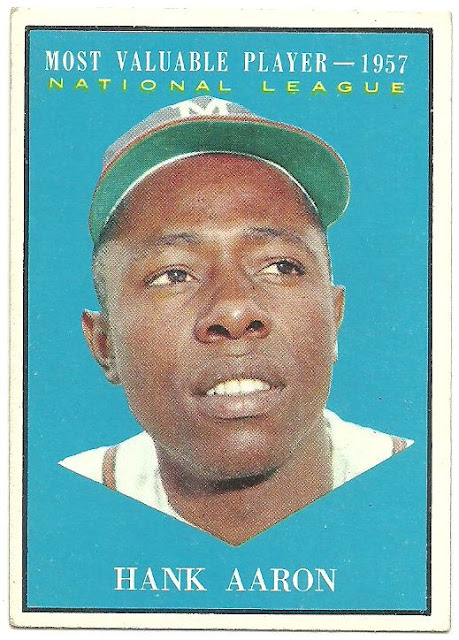 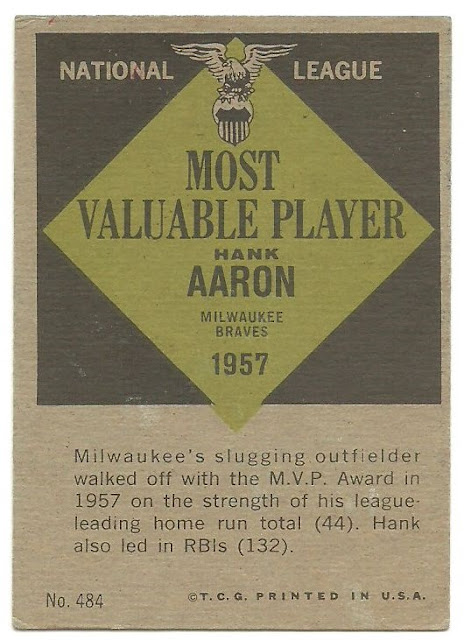 Next up is a 1962 Topps All-Star card that's horribly centered and missing a small chunk of the upper left corner. 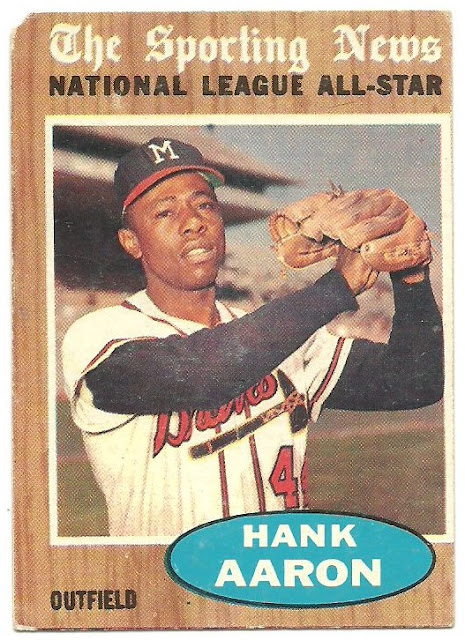 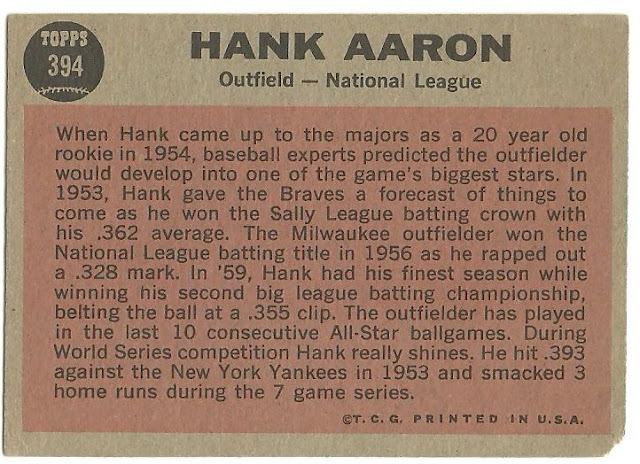 Next up is a 1968 Topps game card of the all-time home run king. Notice the Single. I get that he was still several years away from breaking the home run record, but a Single? Really? I'm guessing that these were inserted one per pack, but after a quick search online I couldn't find anything that told me for sure. Can anyone help me confirm this? 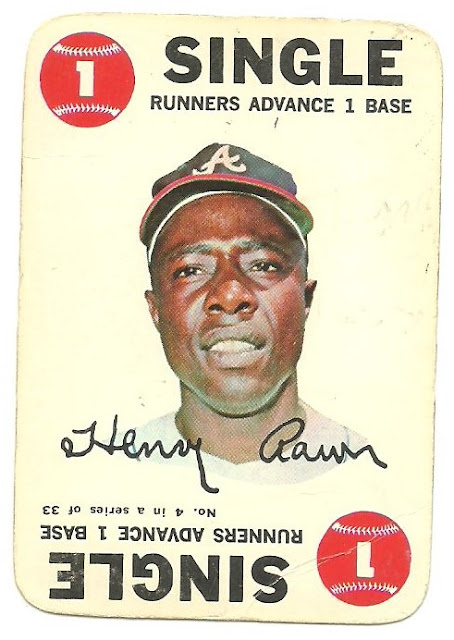 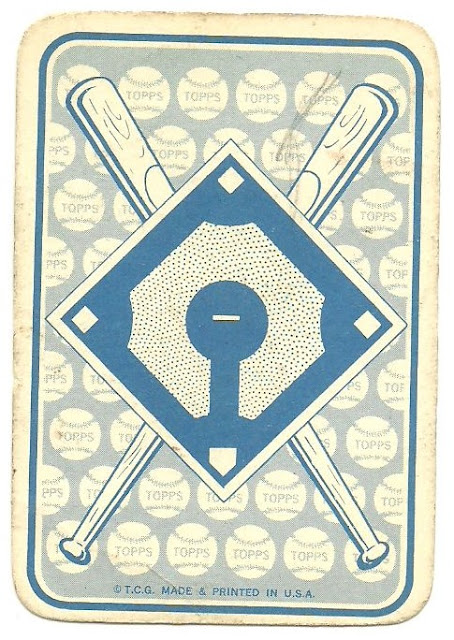 Here is a 1974 Topps card #1 which features Aaron as the "New All-Time Home Run King" even though when it was printed Aaon was still 2 homers shy of the record. I already had this card, but this one is an upgrade. 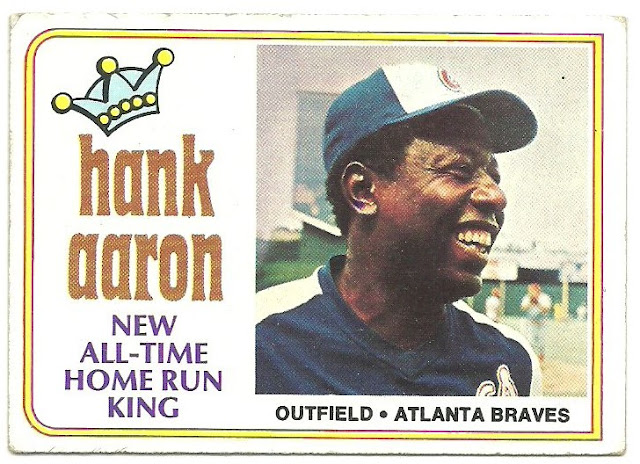 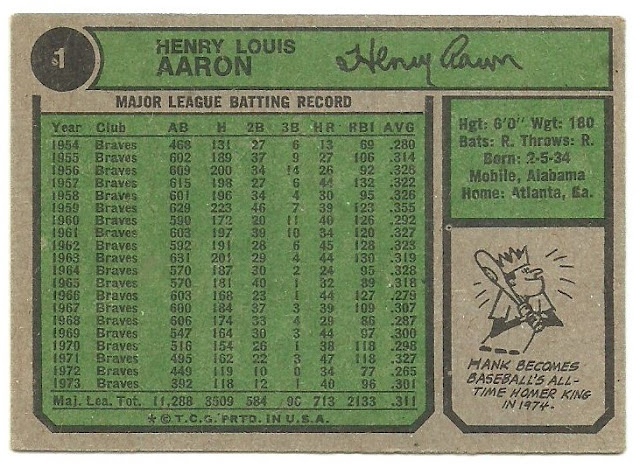 Last, but not least is another card #1 from 1976 Topps. This card commemorates Aaron as the leader in Runs Batted In for a career. This is the other card from the lot that I already had. In fact, as a kid I bought this card and his regular 1976 Topps card from a card shop. It's one of the main reasons that I've always liked Aaron and decided to collect all of his Topps cards from his playing career. 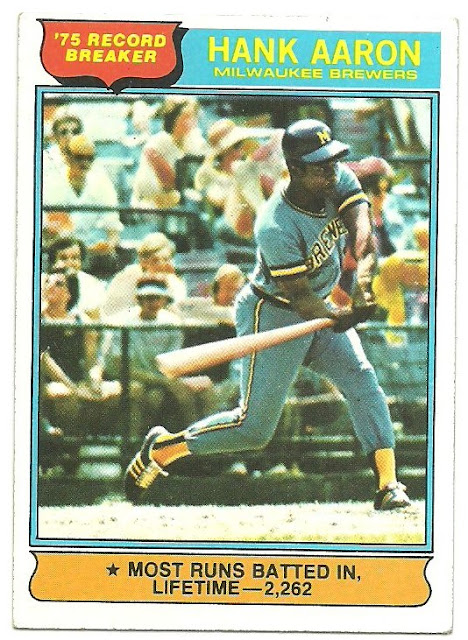 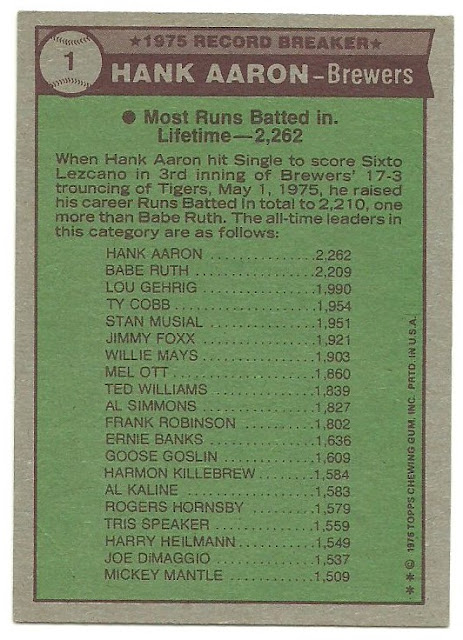 The top 20 list today looks quite a bit different, but one thing I found curious is that Cap Anson isn't listed on the back of the card. Anson ended his playing career in 1897 and his 2,075 RBI would have placed him 3 on this list. Today he's number 4 on the all-time list. Only Alex Rodriguez has passed him. Is it possible that Cap Anson's stats were not calculated in 1976? Were his stats not considered valid because of when he played? Or did Topps not have the right to print his name? Anyone have any ideas?

So there are my 5 Hank Aaron cards that I got for $20 shipped. I think I got a good deal and am happy to have added 3 cards that I needed and upgraded another. What do you think about my purchase?
Posted by Daniel Wilson at 7:53 AM