The 1953 Topps set is widely regarded as one of the most beautiful card sets ever made and is the inspiration for the Topps Living Set which is being produced today.

If you recall I skipped 1953 because I didn't have any (turns out I had a couple, but I wasn't organized), so I picked up a few courtesy of COMC and finally got them shipped to me along with some 1957 Topps cards I needed for my binder.

The 1953 Topps set contains 274 cards with the cards being numbered 1-280. 6 cards do not exist because the players designated for those spots signed exclusive contracts with Bowman. While the set size decreased drastically from 1952, the size of the actual cards remained the same, 2-5/8" x 3-3/4".

You'll notice the red and black background of the nameplate portion. Red is for the American League and black is for the National League. The cards were distributed in 4 different series, but there are reports that some cards that should have been distributed in the early series were not distributed until the later series for some reason.

Here are the 1953 Topps cards that I got from COMC.

The cards really are beautiful! The colors on the illustrated portraits pop and I love the backgrounds. 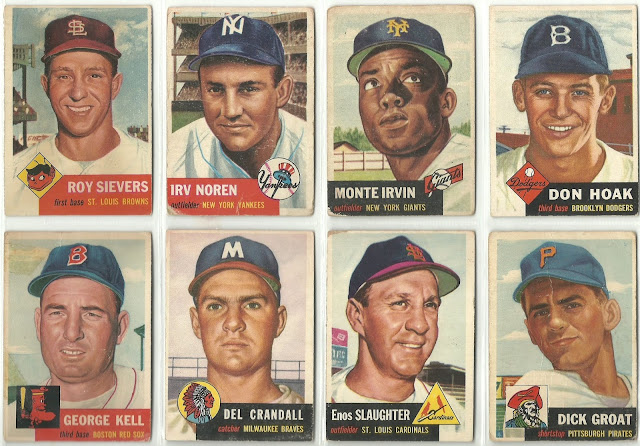 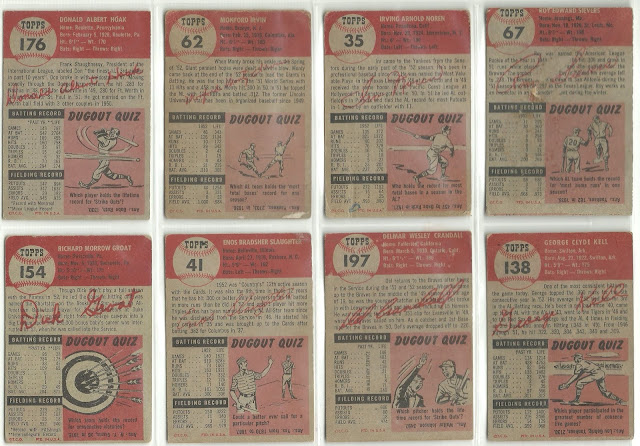 The back of the cards are almost as great as the front. Check out how much is crammed onto the back, but in my opinion, it all works. You've got demographic info at the top, with commentary about the player under that with a facsimile autograph on top, then you have statistics for the past year and their career which includes pitching, fielding and batting stats depending on the player, and finally a Dugout Quiz featuring a cartoon drawing.

I'm not going to go through and detail each card on the page, but there is some star power here for sure with 3 members of the National Baseball Hall of Fame former Rookie of the Year and MVPs.

What do you think? Is 1953 Topps the most beautiful set of cards ever made, or is there another set that you feel is better?