Be sure to check out the contest over at gamindset for a chance to win a hobby box of 2010 Topps Chrome Baseball cards.
Posted by Daniel Wilson at 3:49 PM No comments:

The first Little League team I ever played on was the Yankees. Since we didn't have a team where I lived, the New York Yankees became my favorite team and Don Mattingly became my favorite player. My room quickly became adorned with a Mattingly picture and pennant. I sent him a fan letter and recieved autopen signed photo back in the mail. I tried to get all of his cards. I was a big Mattingly fan! Today I took the day off in hopes of meeting Donnie Baseball and getting him to sign a ball. Mission accomplished! Mattingly manages the Phoenix Desert Dogs of the Arizona Fall League and today they were in Peoria, Arizona taking on the Peoria Javelinas. After batting practice I was able to get Mr. Mattingly to sign my ball. I couldn't be happier! 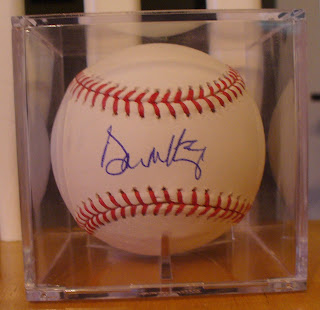 I picked this up at the card shop this week to add to my Brandon Webb collection. It should be interesting to see what ends up happening with Brandon this off-season. I would like to see him sign with the D-Backs and come back strong 15+ wins, 200+ strikeouts, but I just don't know if either of those things will happen. I guess I'll just have to wait and see.
2010 Topps Chrome Brandon Webb Refractor 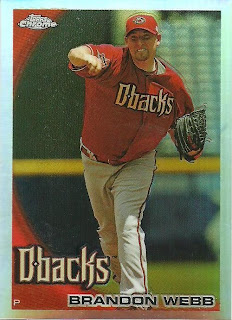 Posted by Daniel Wilson at 7:47 AM No comments:

I was going through a box of cards yesterday and came a few cards to add to my Multiple Bats Collection.  I reached my goal of 50! These cards are 50, 51, and 52 for my collection! Thanks to everyone who helped by sending/trading me cards to help me reach this goal!
2003 Upper Deck First Pitch Aaron Boone 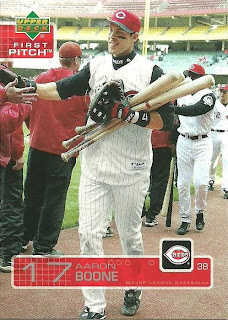 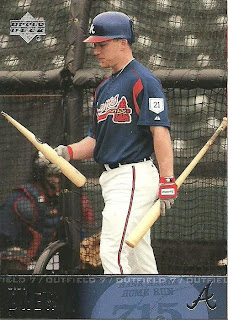 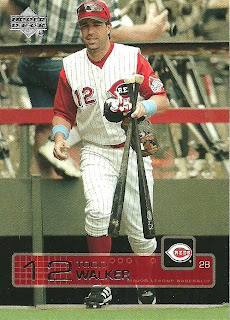 Posted by Daniel Wilson at 6:46 AM No comments:

I stopped by the card shop on the way home from work yesterday and they had just gotten 2010 Topps Update Series in. I can't afford the $85 for the Jumbo box or even the $55 for the regular box, but I did get one Jumbo pack to try to satisfy my craving. At $10 bucks a pack I was really hoping for the auto or one of the two relics promised per Jumbo box but my pack did not deliver. Each pack contains 50 cards. here are some of mine. I turned my TMCG into a 1981 Gary Carter. 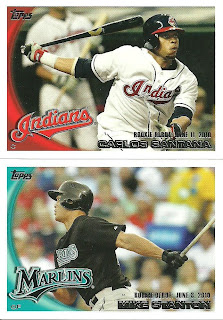 The thoughtfulness and generosity of the bloggers out there never ceases to amaze me. Joe, of the blog The Sandlot, commented on one of my post about my Multiple Bat collection that he had picked up a card for me off eBay that he thought I would like. I got his package today and found inside, an awesome Ernie banks card that I had never seen before. It is a 1977 TCMA card that features the Cubs slugger holding what appears to me to be 7 baseball bats! This is my 49th multiple bat card since I started officially collecting them at the beginning of this year. I only need 1 more to reach my goal of 50. Thanks Joe! I know you said not to worry about sending anything back in return, but you can expect a little something from me in return for your thoughtfulness!
1977 TCMA Ernie Banks 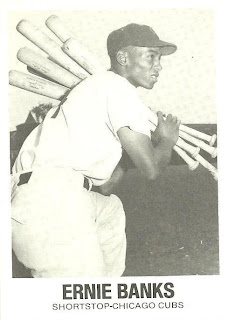 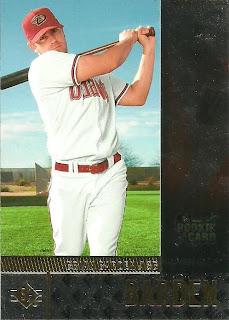 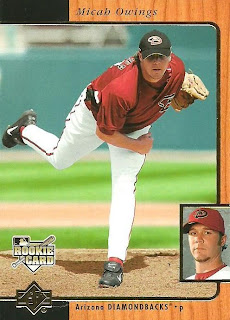 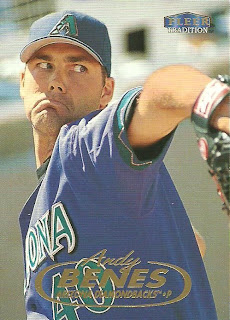 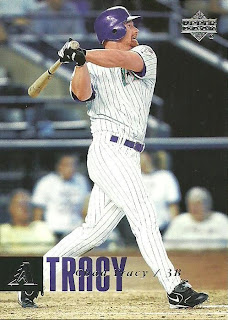 Here is the second out of the three packs that my wife got me recently. It's a pack of 2010 Topps Allen & Ginter.
Ben Zobrist 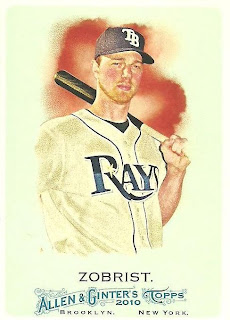 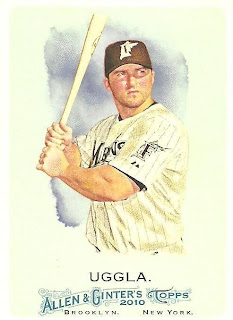 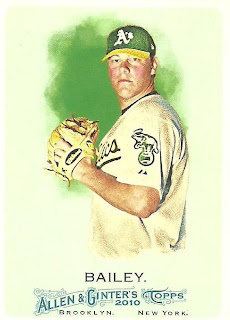 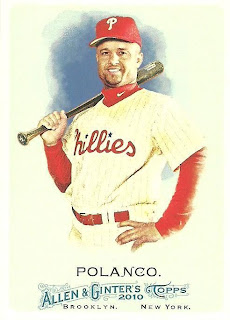 This Day in History - Jason Heyward 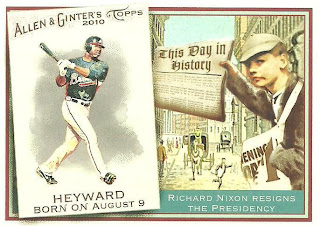 Posted by Daniel Wilson at 3:18 PM No comments:

Email ThisBlogThis!Share to TwitterShare to FacebookShare to Pinterest
Labels: 2010 Allen and Ginter

Babe Ruth and Jorge Posada have several things in common. They both wore or wearYankee pinstripes. They have both won multiple World Series Championships. Ruth hit the first homerun in old Yankee Stadium and Posada hit the first homerun in the new Yankee Stadium. One thing I didn't realize that they had in common before finding both of their cards in a pack of 2010 Topps National Chicle was that they were the exact same height and weight, 6 foot 2 inches tall and 215 pounds.

I don't think I'm alone when I say that I always thought of Ruth as overweight, but I have never thought about Posada that way. I did a little research and found out that during the 1925 season Ruth weighed in at 254 pounds. During the off season he worked with a personal trainer and lost 44 pounds. He must have gained a few pounds back and settled in at 215 because everywhere I loked it listed him at 215 lbs. 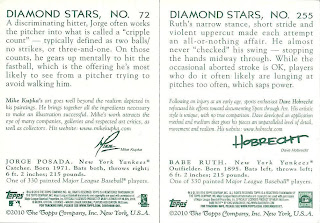 Posted by Daniel Wilson at 9:02 AM No comments: 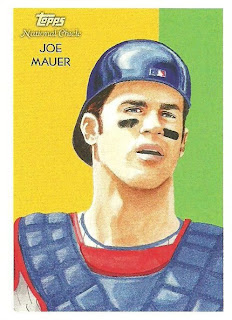 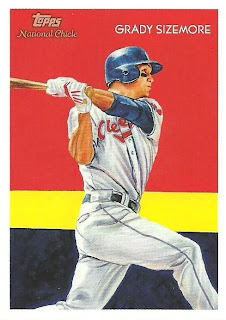 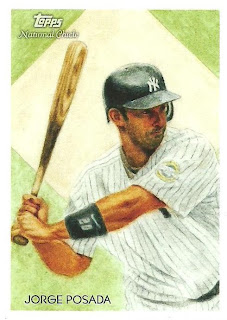 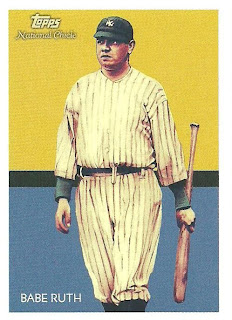 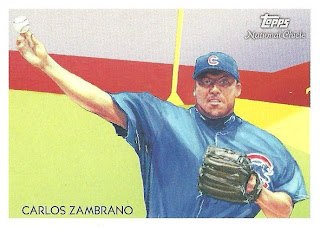 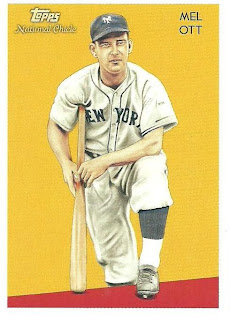 Posted by Daniel Wilson at 8:31 AM No comments:

How does someone that goes 34-49 get offered a two year contract? The Arizona Diamondbacks just announced that they signed interum manager Kirk Gibson to a 2-year deal, with a team option for 2013. How does an organization look at someone with a .409 success rate and say, "Yeah, that's the direction that we want to go." I just don't understand it. Why not take some time and see if they can find a better candidate for the job? I loved Gibson as a player, but he didn't get it done as a manager. Am I the only one that sees this? A.J. Hinch was 31-48 this year when he was fired by the Diamondbacks. That record is not much different than Gibson's record of 34-49. I'm a huge D-Backs fan, but sometimes I just don't think that they make smart baseball decisions. I hope they prove me wrong!
Posted by Daniel Wilson at 4:37 PM No comments:

Contest at Can't Have Too Many Cards

Hackenbush is having a contest to celebrate his 500th post. Be sure to check it out at Can't Have Too Many Cards!
Posted by Daniel Wilson at 7:41 AM No comments: