I'm on a Crusade

Quick shout-out to Jared for the box of D-Backs he dropped on me. It's going to take me a while to sort and scan and post everything he sent, but a post is definitely coming. There will also be a return package.

Meanwhile, I picked up a nice two card lot off eBay that finally made its way into my hands. I got an email on Monday that the package was delivered, only there was no package. I decided to wait another day to see if it showed up before doing anything, but no package on Tuesday. On my way home from work on Wednesday I call the post office to file a report. After I got home, there was a knock on my door and a guy with the package. He said it had been delivered to him by mistake. I'm so glad it made it to me. 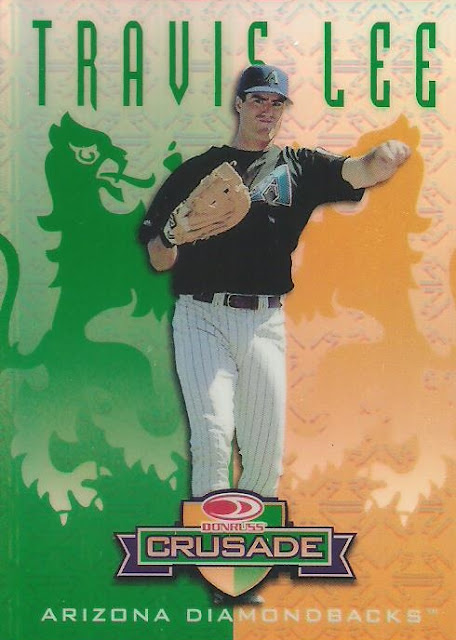 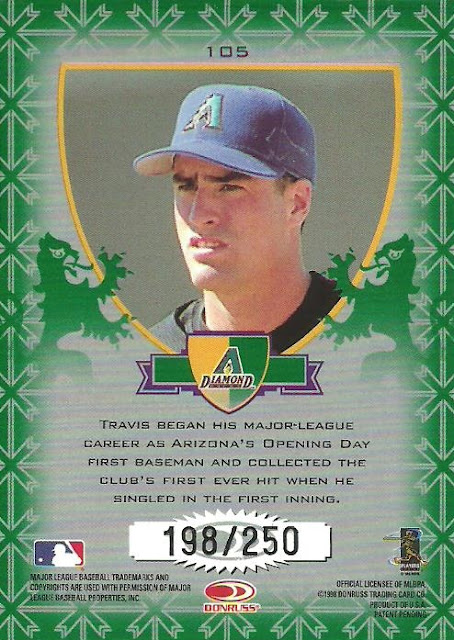 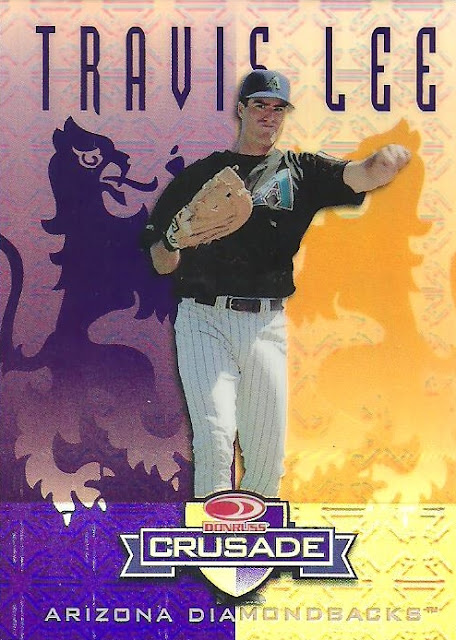 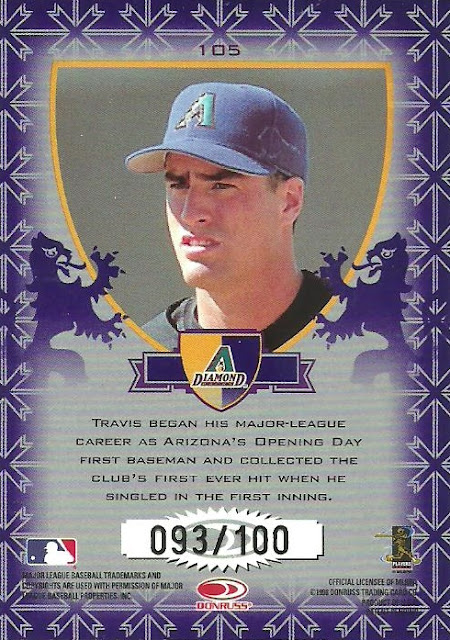 I picked up these cards for what I consider to be a really good price. I'm a bit disappointed with the purple one though. Anyone that's familiar with these 1998 Donruss Crusade cards ever seen the line across the bottom right above the Donruss logo?

I still need the red version which is numbered out of 25 and if I can ever find one, I'm sure it will be pricey. If you happen to be sitting on one and want to trade, let me know.
Posted by Daniel Wilson at 4:37 PM 7 comments:

The Chronicles of a Care Package

Fuji sent out a ton of packages recently and I was the lucky recipient of one of them.

Let's take a look at some of what Fuji sent! 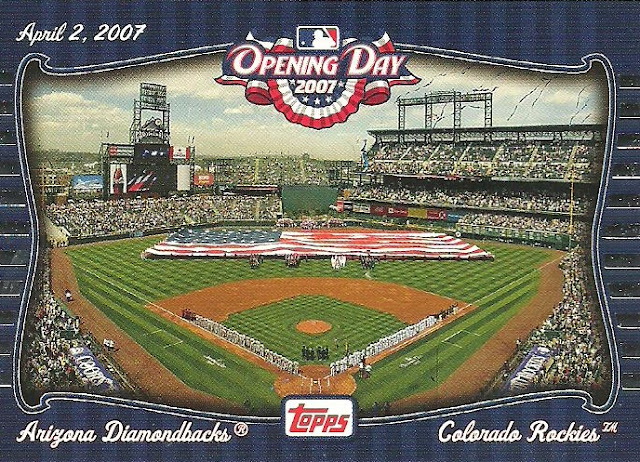 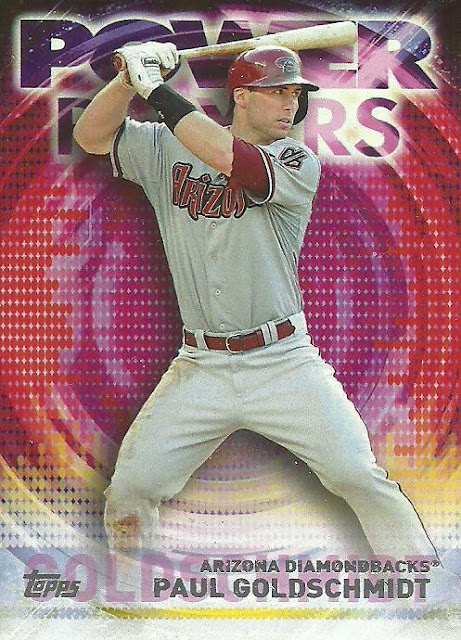 Topps likes to reuse photos and just crop the image a little bit. 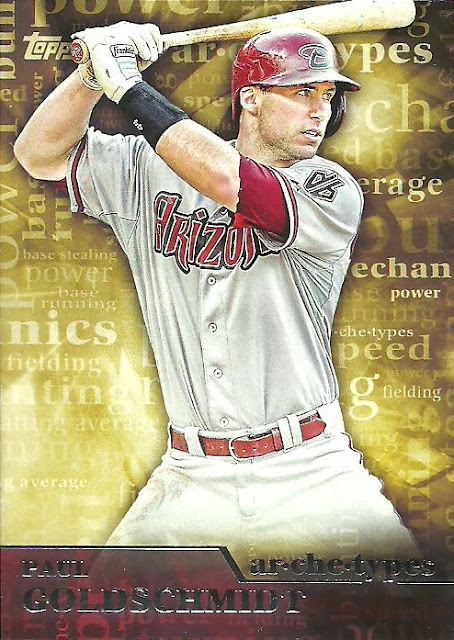 I already had the gold parallel, but needed the blue! 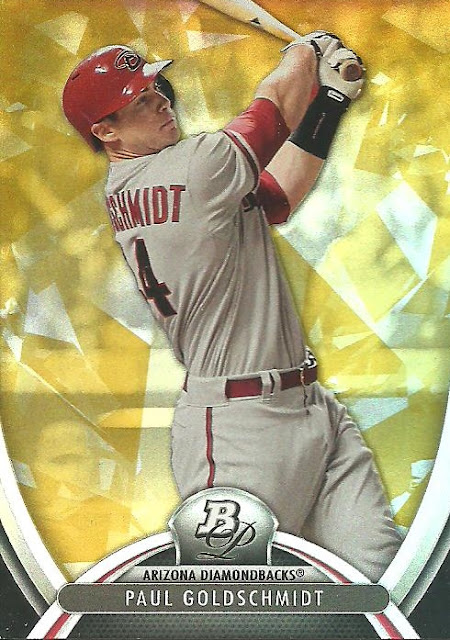 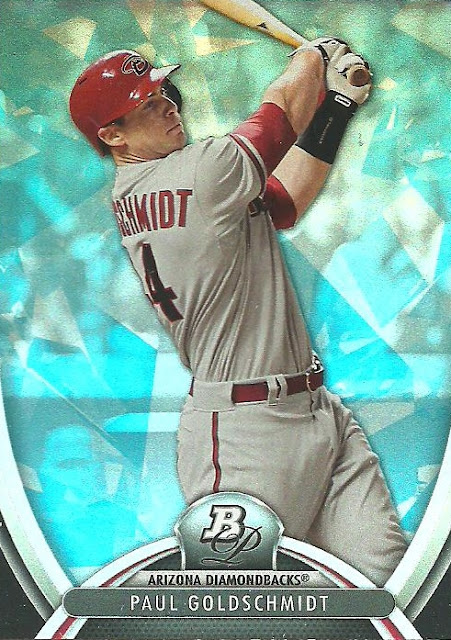 This 1999 UD Black Diamond red parallel of Jay Bell is sweet! The scan doesn't do it justice. 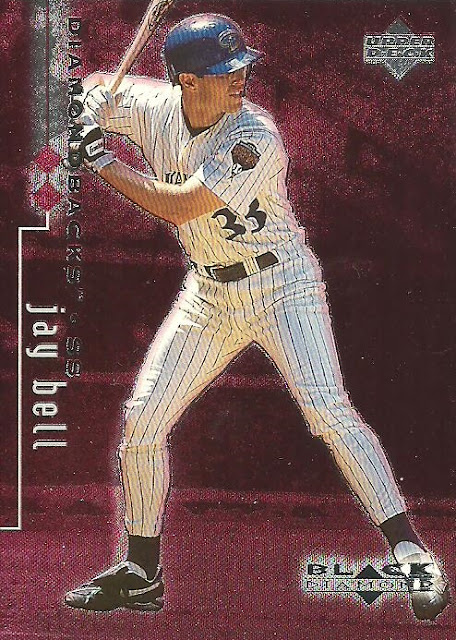 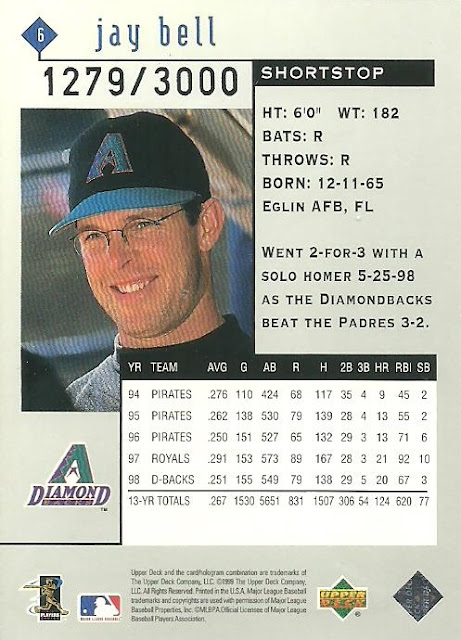 Next up are two Steve Finley jersey cards! 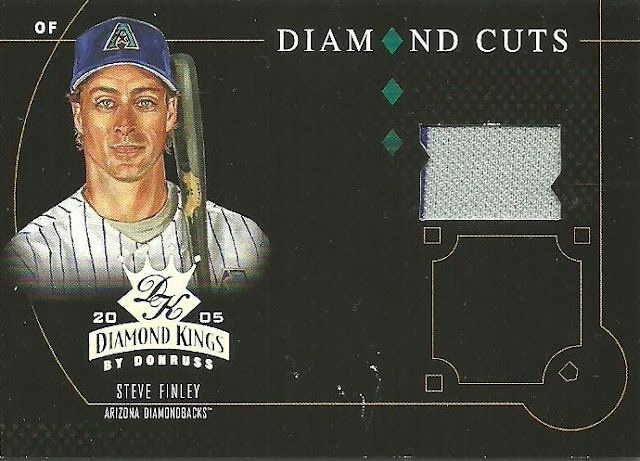 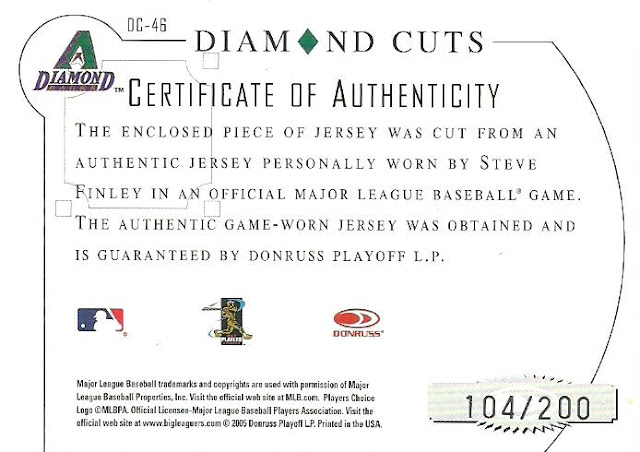 I've got a nice little Finley collection and these make excellent additions. 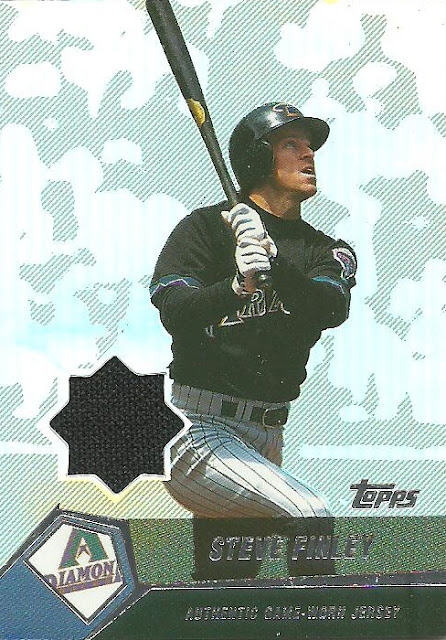 Thanks for a great package Fuji!
Posted by Daniel Wilson at 7:48 AM 6 comments:

I won the battle, but lost the war.

I've always liked history and so I was drawn to the show TURN which is about spies during the Revolutionary War. 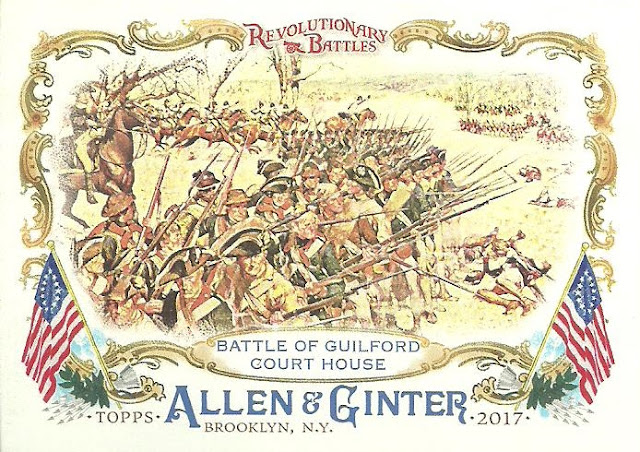 When I saw that Topps included a Revolutionary Battles insert set in its 2017 Allen & Ginter set, I decided to pick it up. I was able to get half the set from a dime box at a card show, leaving me needing five cards to complete the set. 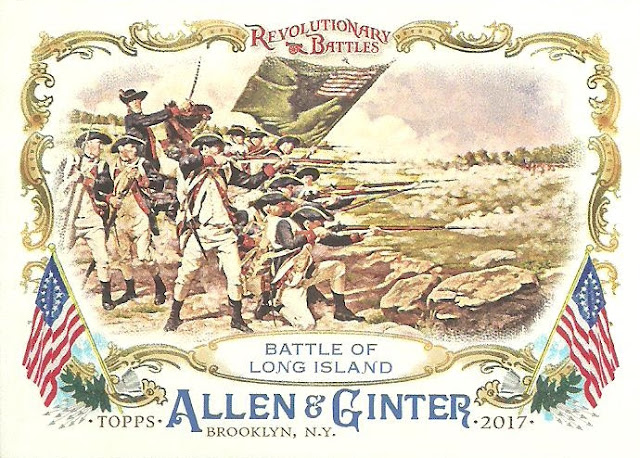 Judson, of the blog My Cardboard Habit, posted some 2017 Allen & Ginter needs and I had a few cards he needed, so we worked out a trade. 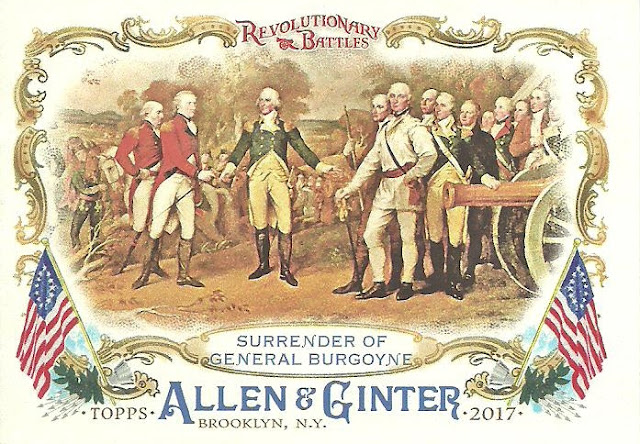 I was expecting three Revolutionary Battles cards, but I got much more. 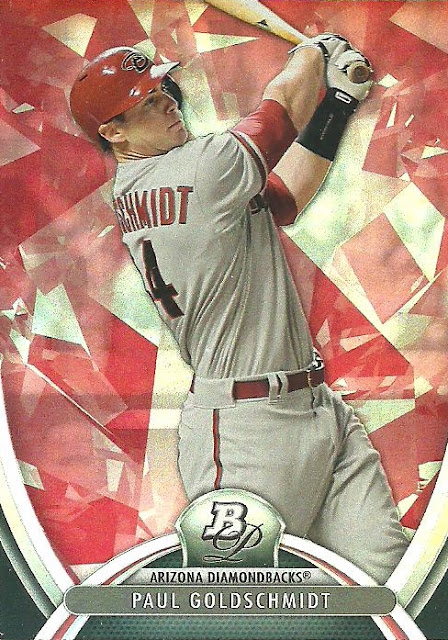 As if a new Goldschmidt wasn't enough, Judson sent this bad boy! 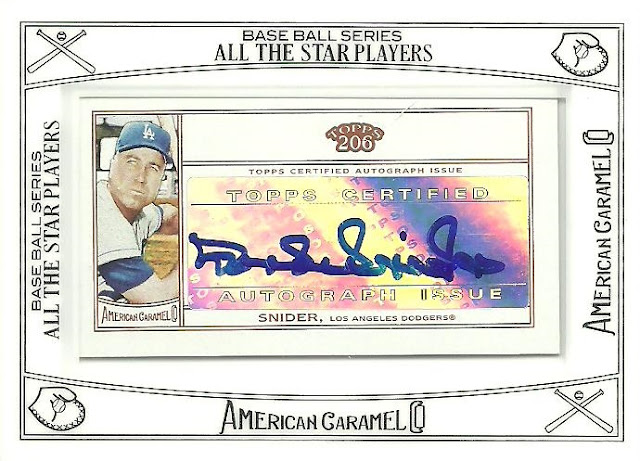 I've always been a huge Duke Snider fan! Prior to 1998, the Dodgers were my favorite team. I also love the history of the game and have always been fascinated by Willie, Mickey, and the Duke. I also always felt bad that it took so long for Duke to make his way into the Hall of Fame. He retired in 1964 and didn't make it in until 1980. Hard to believe for the guy who hit the most home runs during the 1950's.  To add a certified auto to my collection is awesome! Thank you Judson! As the title of the post indicates I won the battle (Revolutionary Battles cards), but lost the war because Judson sent me so much more than I sent him. Expect another package soon Judson!
Posted by Daniel Wilson at 7:26 AM 6 comments:

Every Day's A Holiday - November 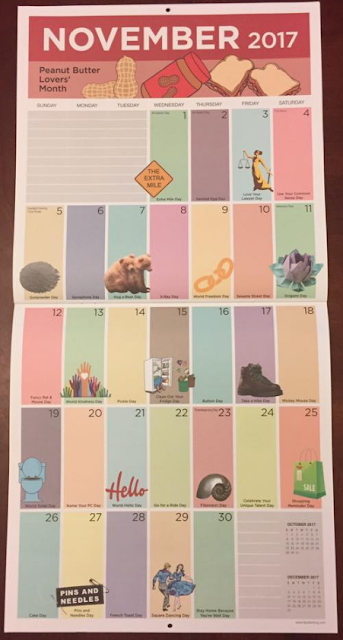 Here is a day by day breakdown for November.