I went with a friend on Saturday to a card show billed as one of the largest card shows in Arizona, with 350+ tables. It was held at the Phoenix Convention Center downtown on Friday, Saturday and Sunday. 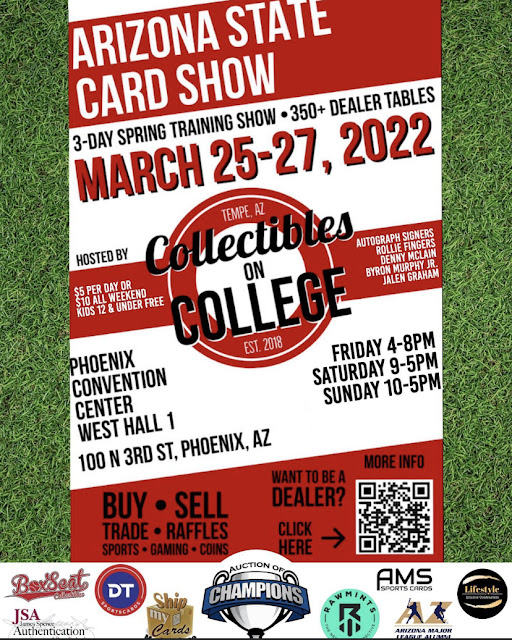 I went on Saturday with a friend. One of my boys had a basketball game on Saturday morning, so we didn't get to leave until almost noon. It should have taken about 30 minutes to get there. It ended up taking nearly 2 hours. The freeway was closed which caused tons of traffic on the side streets. We looked up an alternative route, but the route it gave us was for a road that ended up being closed. It was a mess, but we finally made it.
It cost $15 for parking and $6 ($5 + $1 convince fee) for admission. We ended up spending about 2 hours looking around.
It was a big show. The biggest card show that I've ever been to. I should note that I've never been to The National. Most dealers had multiple tables, so I would guess there were probably only about 100 dealers. The rows were wide and so even though it there were a lot of people, it didn't really feel crowded.
Here is my breakdown of the show:
70% Modern
20% Vintage
10% Non-Sport
My friend and I were really only interested in vintage. While many dealers had vintage sprinkled throughout their cases, there were probably only about 5 dealers that were nothing vintage. We spent most of our time at those tables and at one in particular. It's the same dealer that sets up at the monthly show that I attend regularly. He has tons of vintage, all ungraded, all at great prices.
I need 12 different Topps Hank Aaron cards to complete my run. My main goal for the show was to get a 1955 Topps. Going into the show I needed his 1955, 1957, 1958, 1962, and 1964 Topps base cards. The others are league leader, combo, or all-time leader cards.
I was able to grab this 1964 Topps card. Off centered, but otherwise in pretty nice shape. 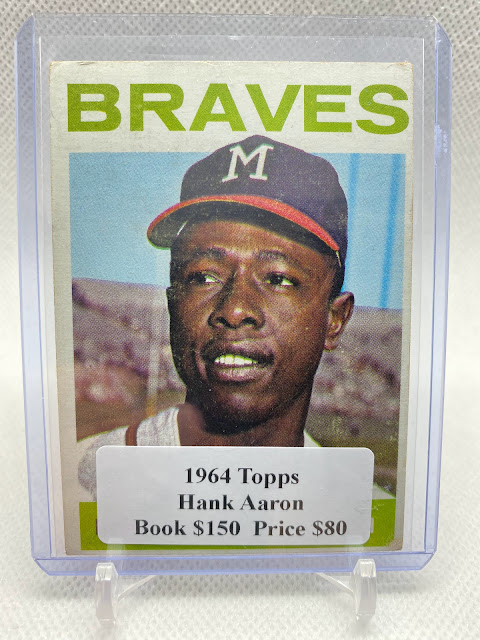 From the same set I grabbed this league leader card. I came across this same card at another table earlier. It was centered nicely and in good shape. It had an $85 price tag and the dealer said he would let it go for $60. I passed and was able to gab this for a tenth of the price. 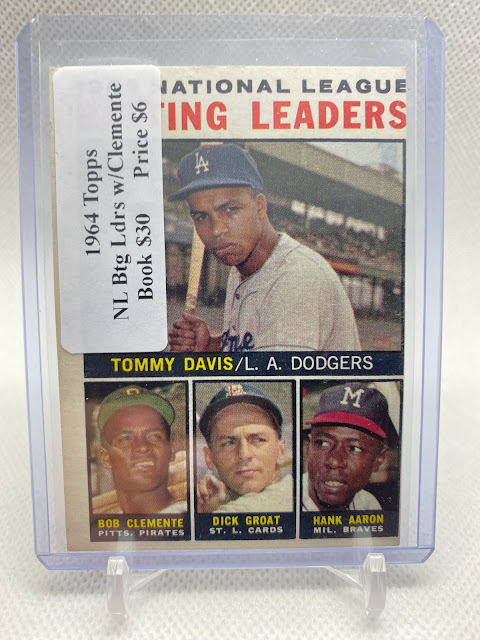 This 1966 N.L. Batting Leaders card was probably my favorite pick up from this particular dealer. I have been looking at this card on eBay recently and because of the star power, it is pricey for a league leader card. I was extremely happy to find this with a $12 price tag. I do wish Topps would have chosen a different photo for Mays. 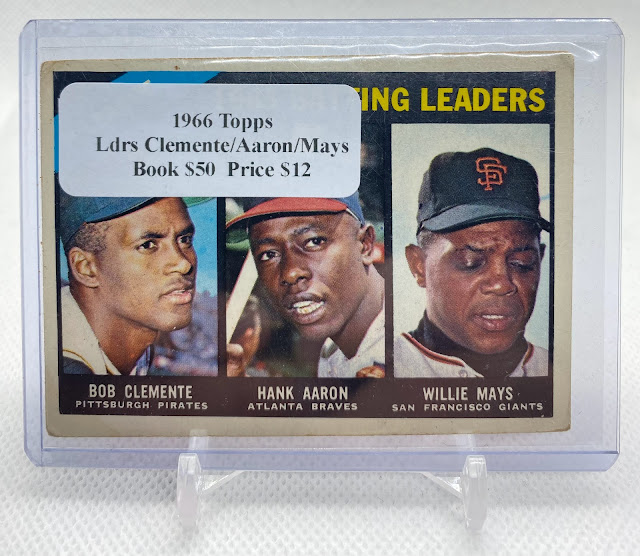 From the same dealer I grabbed a few cards from his $2 box and one from his $5 box.
This 1962 Post Roger Maris was the $5 card. I know it looks rough, but I am thinking about trimming it up. I think it would look pretty decent. Let me know what you think. Do I trim it, or leave it as is? 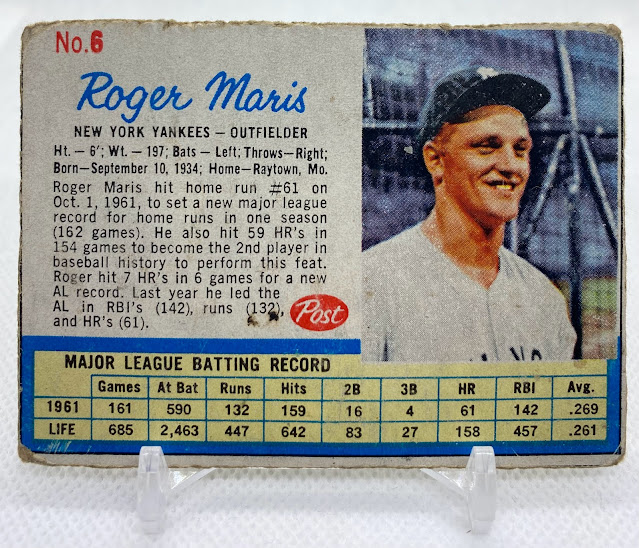 These came from the $2 box. 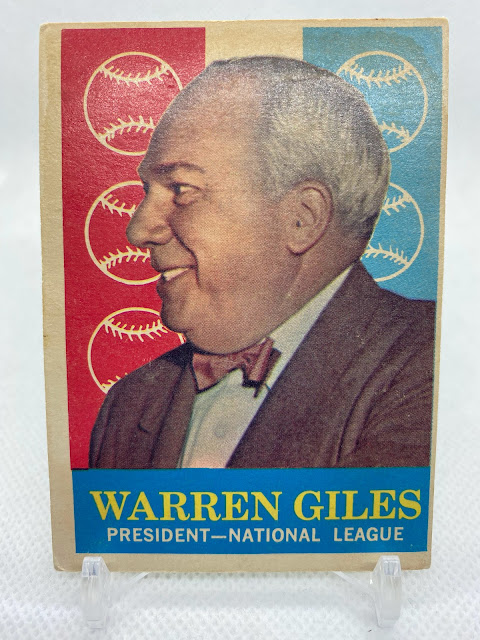 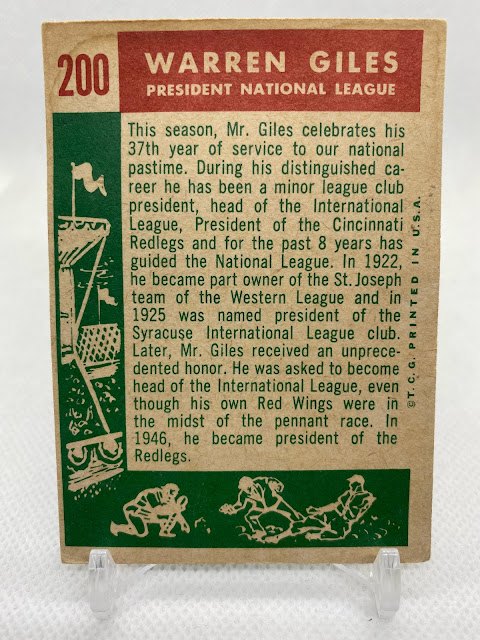 I needed this card for my Herb Score collection. 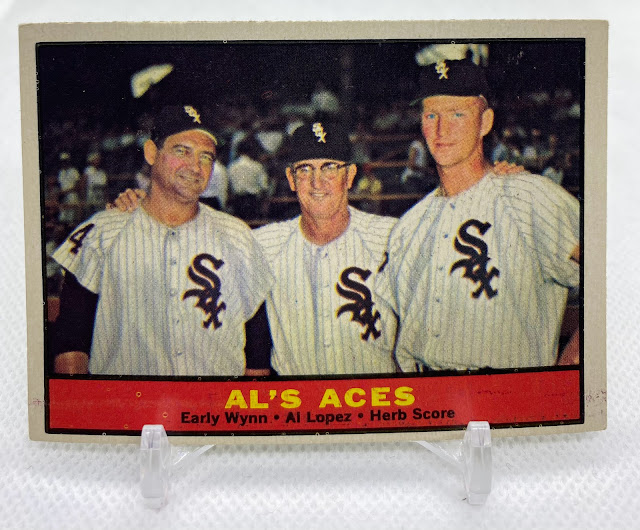 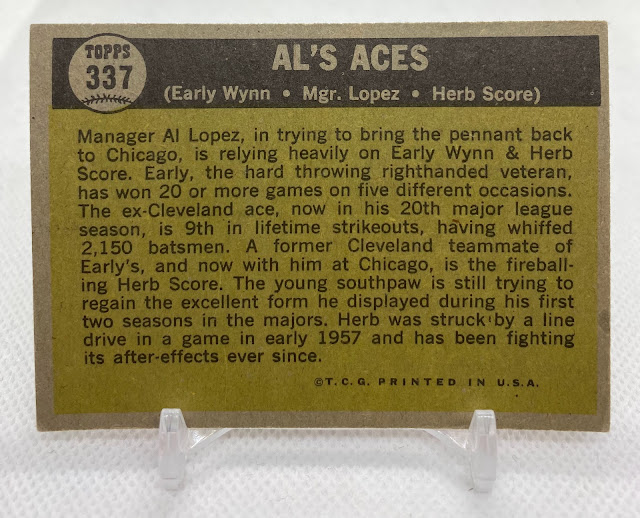 Here is Willie Mays last Topps card since Willie did not have a base card in the 1974 set. 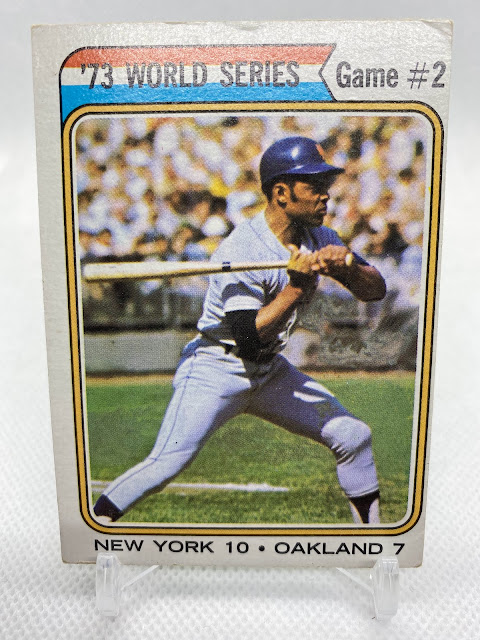 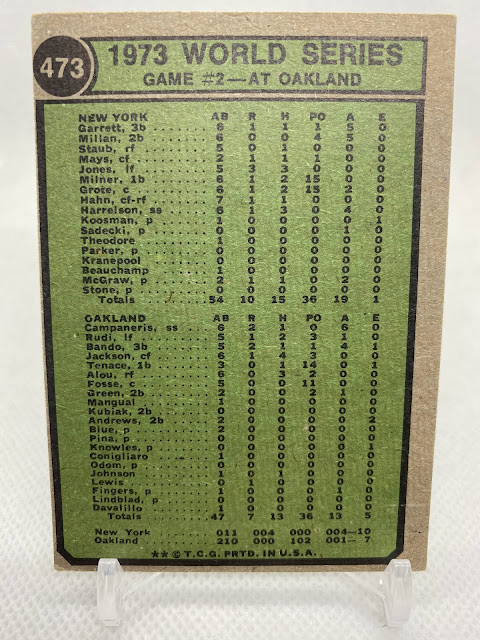 The sticker price of these cards is $109. Without even asking for a discount, the dealer told me $100. Deal.
My next purchase was this 1955 Topps Hank Aaron. It had a $350 price tag. I asked the dealer if he had any room and he said no. I told him I would look around, but might be back. This is the card I was looking for at the show. The one card that I really wanted to add to my collection. This was the only non graded version available. After searching the entire show, I headed back to this dealer and offered him $320 and he accepted. 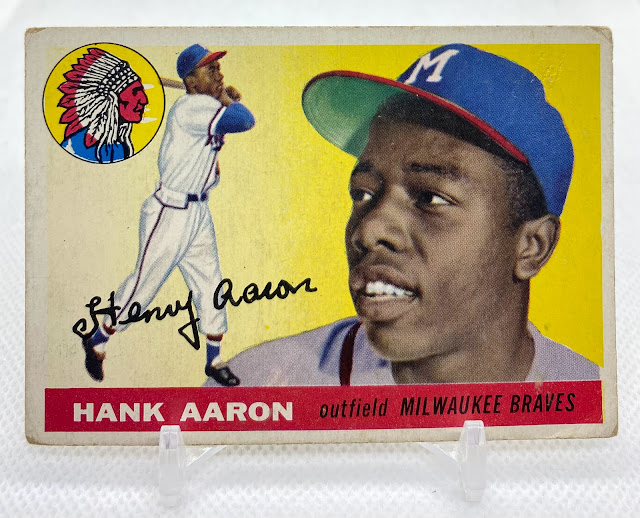 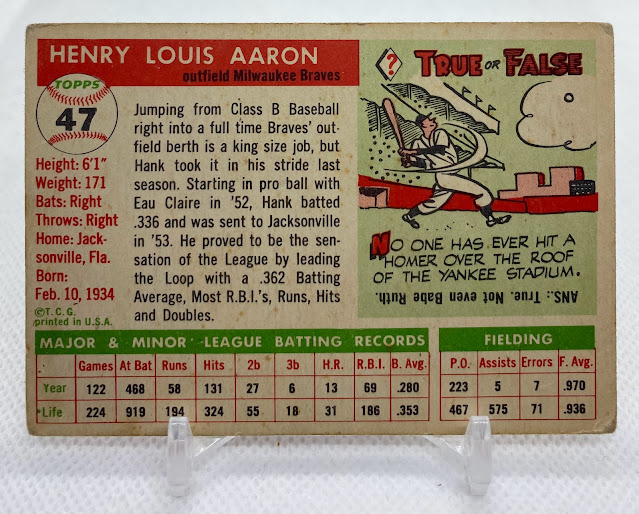 How fitting that Babe Ruth was mentioned as part of the answer for the True or False question on the back of Hank's second year card.
My last purchase of the day was a card I've had my eye on for quite some time. This card was plentiful at the show. I don't normally buy graded, but this is a card I wanted to buy graded for two reasons. First, because the card is known to be counterfeited and second, because I knew that buying a card in a lower grade would help me get a good deal.
This one had a $149.99 price tag. I asked if the dealer what was the best he could do. He told me $120. I told him I would think about it and maybe come back. I then went and worked out the deal on the 1955 Aaron. I came back and he told me because I came back he would do $110, so I bought it. 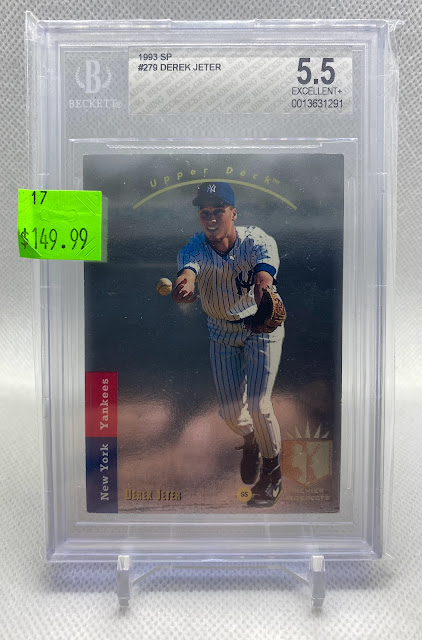 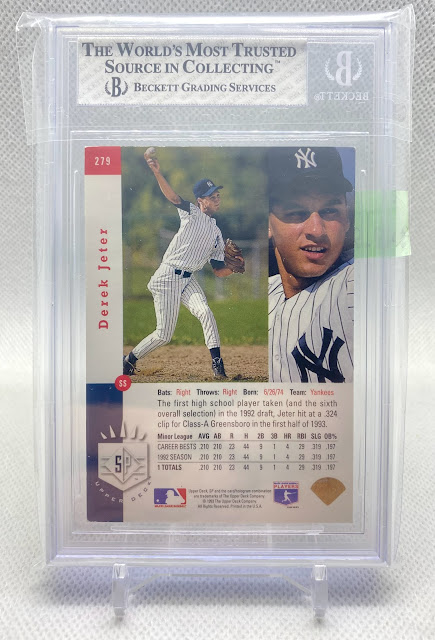 Hard to tell from these pictures, but it is certainly that are the main contributor to the 5.5 grade.
Overall, this show was a great success. I was able to add the one card (1955 Topps Hank Aaron) I really wanted to as well as 3 other Hank Aaron card I needed and I was able to get a reasonably priced 1993 SP Jeter card, which I have been looking at for years.
In addition, I saw a ton of other amazing cards, Multiple 1951 Bowman Mantle rookies. A 1952 Topps Mantle, for the low, low price of $20,000. It was graded Authentic Altered. The original owner had written his name on the back. Multiple Jackie Robinson cards. His Leaf rookie card and three 1952 Topps cards among others.
In talking to the one dealer with all the vintage, it was clear that it was busy on Friday night. he said he did more in sales on Friday night in just 3 hours than he had done so far on Saturday and we were at his booth just a couple hours before the end of the day on Saturday.
It felt rushed. Probably because it took so long to get there. I didn't go through any dime or quarter boxes like I usually do. But I don't know if I even saw any dime boxes to be honest. I didn't even go through any dollar boxes, but I was knew going in that I wanted to allocate my funds elsewhere, so that's okay.
I haven't been to a card show with a friend since I was a kid, so that was fun. Will definitely see if we can go to more shows together in the future.
Posted by Daniel Wilson at 8:06 PM 8 comments: