Last weekend I added an Al Kaline rookie card to my collection courtesy of some Christmas cash from my Dad. Yesterday I went to a card show and was hoping to add another big rookie card to my collection. Sometimes things don't go according to plan. The most I spent on any one card was $5, but the majority of my purchases were $1 or less.
There was a new dealer at the show that has a big box of "well loved" vintage sorted by year for 25 cents each or 7 for $1. The cards started with 1958 and went up through 1978. 1958 - 1960 was in short supply, so I didn't add any until 1961.
As you can see, I grabbed a lot of league leader cards and other subsets (World Series, Team cards, and Baseball Thrills). 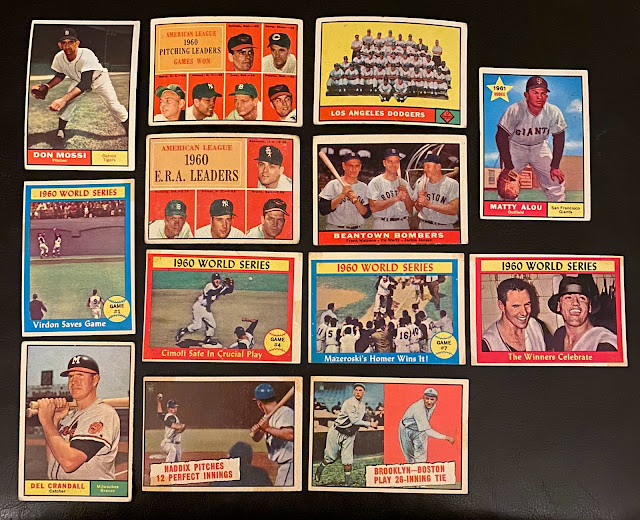 More subsets (All-Star, League Leaders, combo cards, etc.) At 7/$1 these cards are about 14 cents each. So even though the Musial is missing part of the card, I was happy to add it. 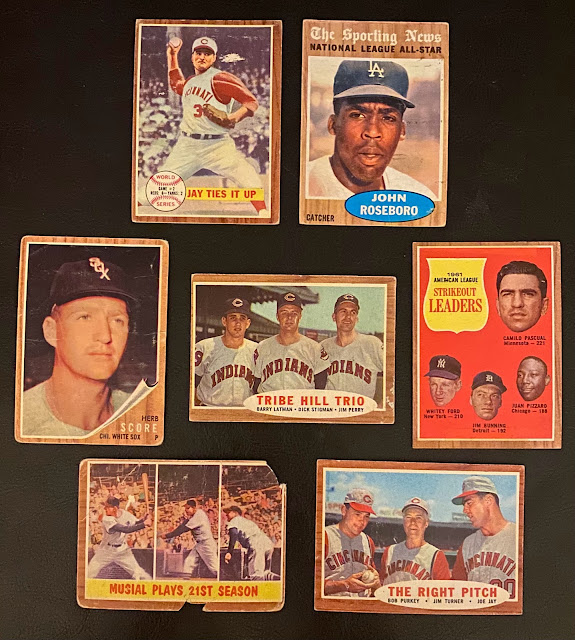 Some years yielded less cards than others.

Sometimes I grabbed cards knowing I already had it. Like the 1964 Curt Flood. I have a couple of these cards already, but it's a unique card because at one point there was a collector that was trying to corner the market on 1964 Topps Curt Flood cards. Not sure if that is still the case, but whenever I see this card, that's what I think of. I also grabbed a few checklist cards. Sometimes they were unmarked, like this one. Other times they are nearly full. 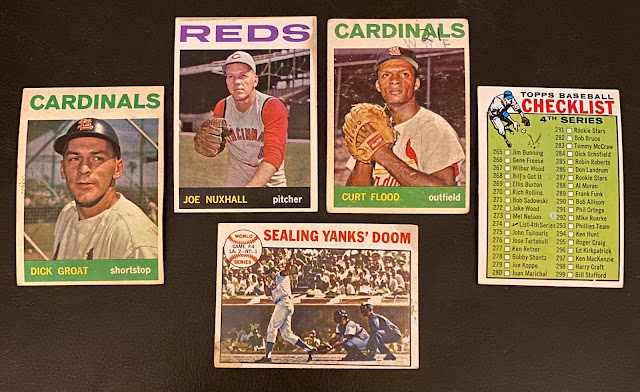 Many of the cards available had marks at the top of the cards like the Campaneris and the Tiant. If anyone has any thoughts on what the markings are from, please let me know. I am wondering if it was for some type of game. 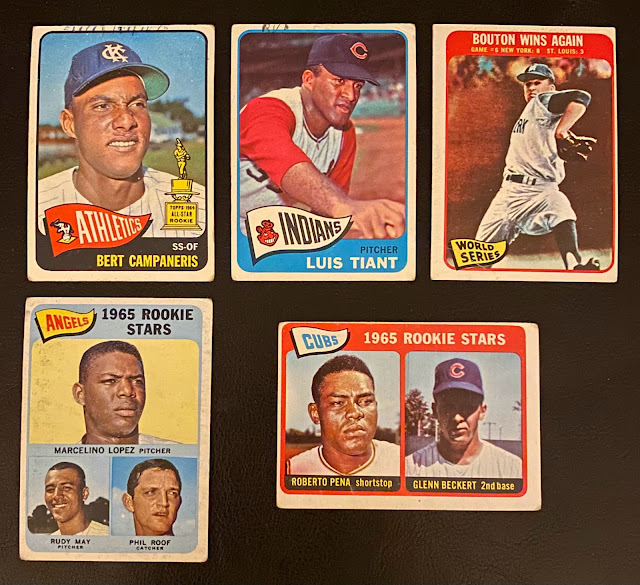 I have the Mossi, but again, at 14 cents, I'm going to grab another copy. Mossi is a guy I collect. Some rookie cards of familiar names and League Leader cards with Hall of Famers. 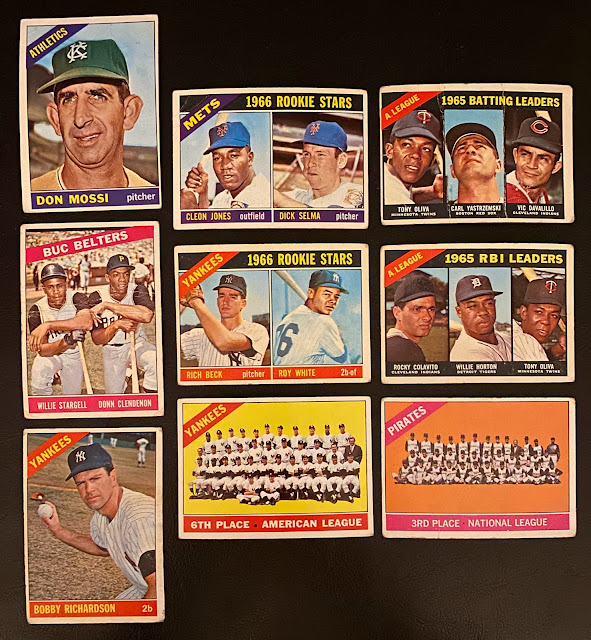 A few more Hall of Famers. Kaline and Alston and then the heads of Mays, Frank Robinson and Clemente on the checklists. 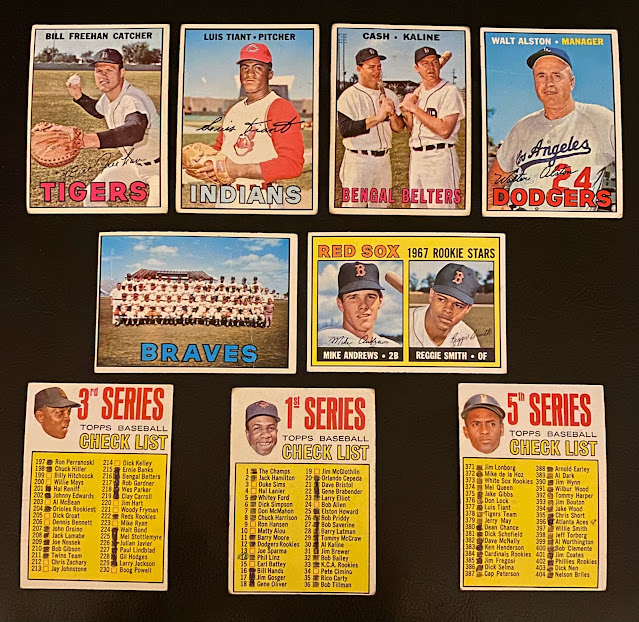 More familiar names, aside from Bill Hands. I grabbed that one on the off chance that it is actually signed by Mr. Hands. 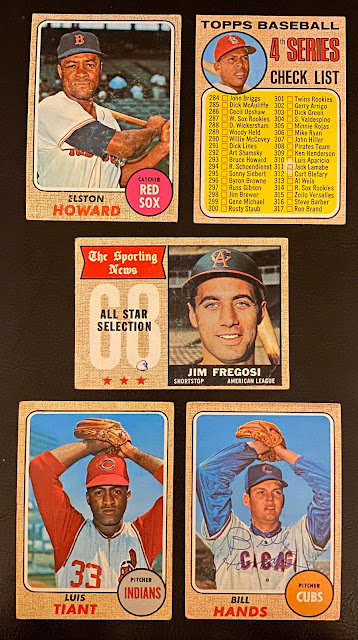 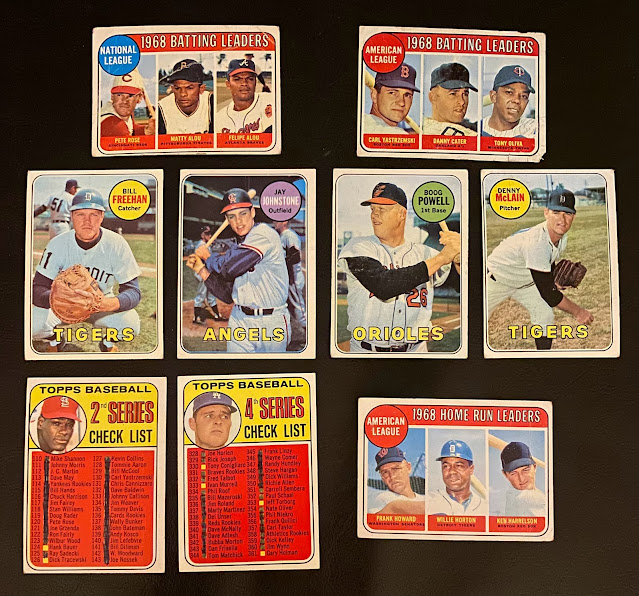 Much like the 1964 Curt Flood card, I tend to always grab this 1970 card as well when I come across it at a good price since Flood never actually played for the Phillies. 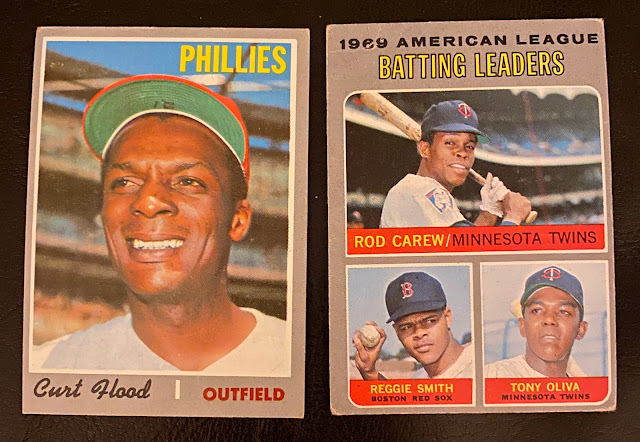 I passed up an 1971 cards since I've already completed that set. I did grab some 1972 Topps cards though. 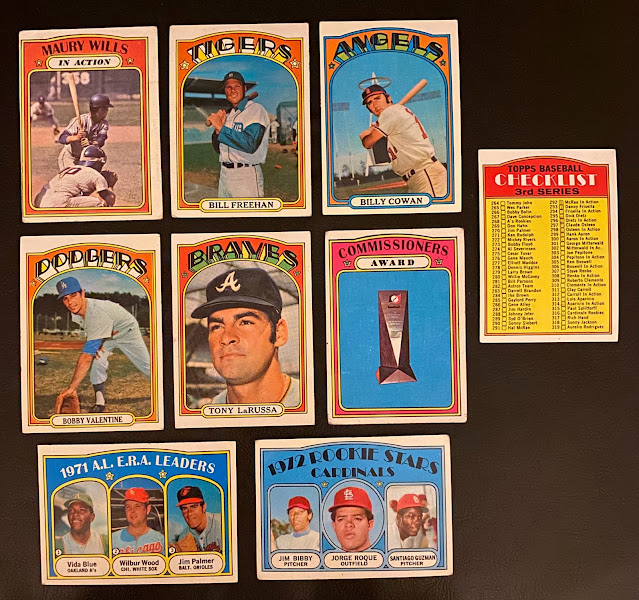 I stayed away from 1973 since I didn't have my checklist. Nothing from 1974 either and just this one from 1975. Again, another card I already have because I have always found Ron LeFlore's story to be so interesting. 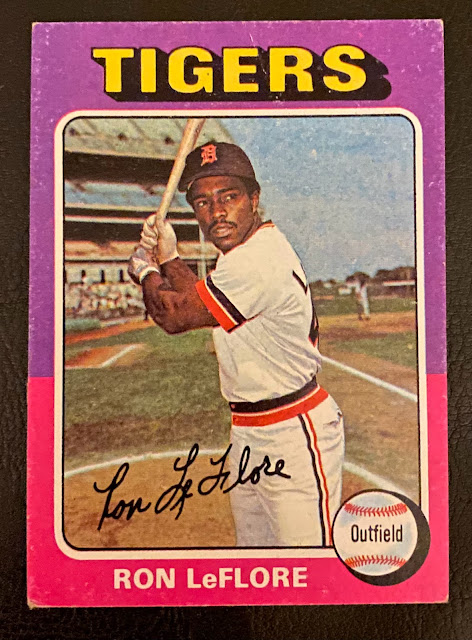 All told, I spent $11 on these "well loved" vintage cards. I had fun looking through the box and picked up a few cards of players I collect. Most of the cards will make there way into my Topps by year binder.
Posted by Daniel Wilson at 7:09 AM 9 comments:

On Saturday I stopped at AZ Sports Cards and spent most of my time at the main vintage case. It's the same case that I bought my 1955 Bowman Hank Aaron. The case is filled with vintage,  but most of the big cards from their purchase a couple of months ago from an original owner of 1952 - 1958 Topps and Bowman cards are gone. The only big cards left were a 1954 Topps Al Kaline and a couple of Ted Williams (1956 and 1957 Topps). While I'd love the Williams cards, my big focus is on Hall of Fame rookie cards, so I decided to see if I could negotiate the price of the Kaline rookie card.
It was priced at $250. I asked if there was any room and was told that they would do $200 today only. So I left to get some cash and went to my son's baseball game and went back to the shop a couple hours later. The card was in a different spot in the case. I guess someone else had looked at it. They had a 1955 Bowman Kaline and it was gone, so I'm glad the 1954 was still there.
Here's a pic I took in the car after making the purchase. 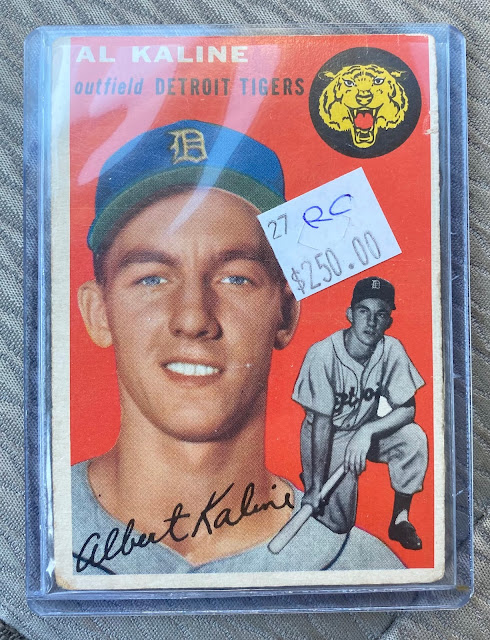 Here are pictures of the front and back outside of any case. You can see more of the flaws, of which there are many, but man do I love this card! 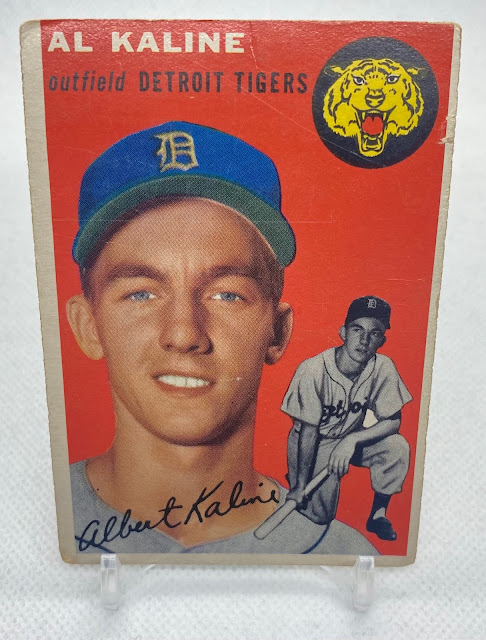 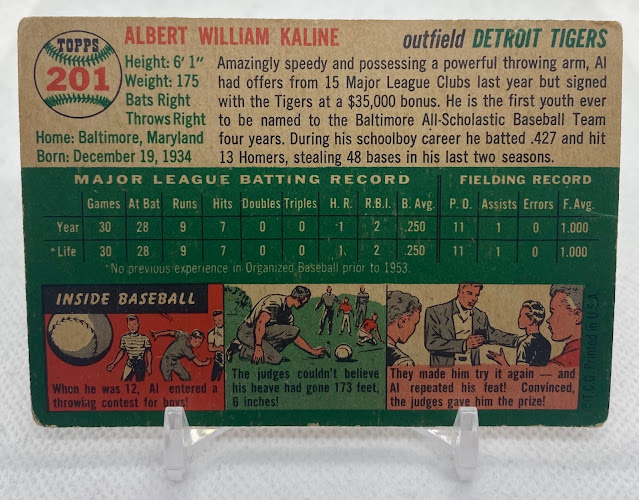 Alright, last picture is a screwdown. The guy I bought it from tried telling me I needed to get a one touch for it and I told him I didn't think they made one touches for the 1952 - 1956 Topps and Bowman larger cards. I had this case already, so that worked out nicely. 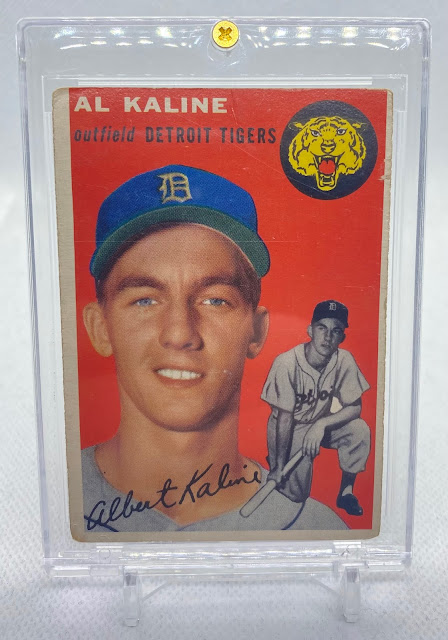 Very happy to add this Hall of Fame rookie card to my collection! Kaline had an amazing career. 3,000 Hit Club. 18 time All-Star. 10 Gold Gloves. Hard to believe it has almost been two years since he passed.
Posted by Daniel Wilson at 7:28 AM 8 comments: