The stack of cards on my desk that had some Mattingly cards yielded 6 cards, 5 of which ended up being new to my collection. The only dup was the Heritage card at the bottom. 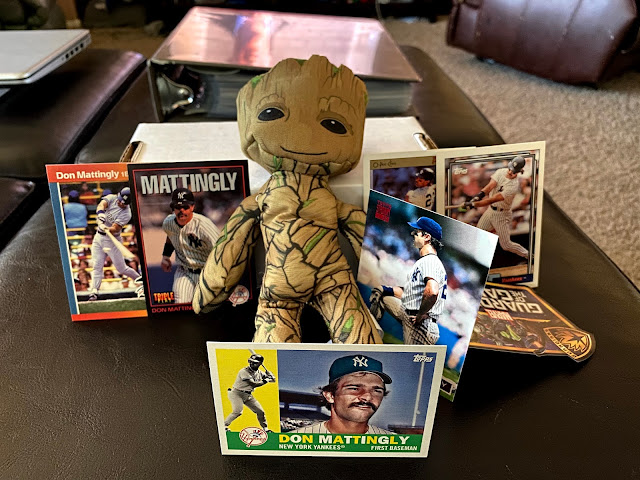 My favorite of the 5 cards I added to the binder is the Triple Play card. I know Triple Play has always been a low end brand and I'm not a fan of the Panini reboot, but I really like the look of the early Triple Play cards, especially black borders of the 1993 cards.

While adding these 5 cards to my binder I realized that I now have 111 Mattingly cards in the binder. I've got a few rookie cards in other places and an autograph, so I'm probably around 115 unique Don Mattingly cards. 9 year old Daniel would think my collection is amazing. 38 year old Daniel, still thinks it's pretty cool.

What are your thoughts on the early Triple Play cards? Love um or hate um?
Posted by Daniel Wilson at 5:00 AM 5 comments:

Let's put away some more cards from my desk.

There was a stack of cards on my desk that contained some cards for other player collections that I have.

I don't know anyone baseball fans that grew up in the 1980's that didn't like Dale Murphy. He was a great player and a great guy and was on the Braves, who were on TBS all over the country. 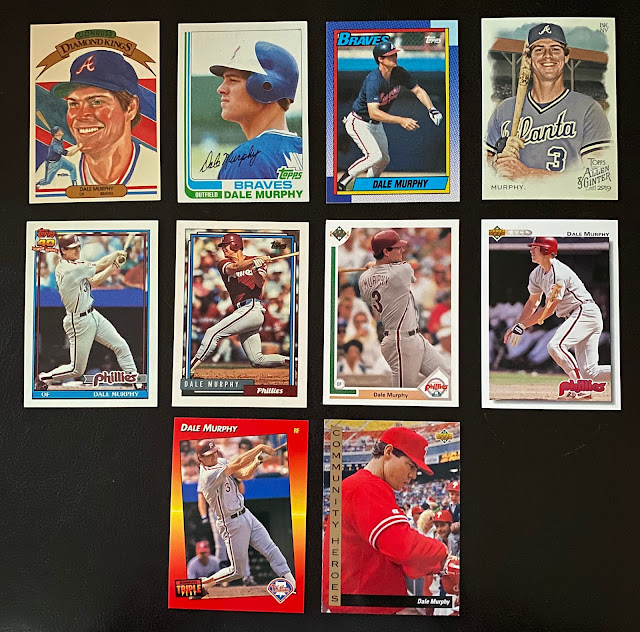 Of the 10 Dale Murphy cards shown, I was able to add just two to the binder with my Murphy cards. I added the Allen & Ginter card and the 1993 Upper Deck Community Heroes card. Everything else was a duplicate.

Sometimes you go into this process knowing that a card is a dup, so it's no big deal. Other times you go into it thinking that you'll be adding to your PC and so when you determine that cards are duplicates it's really disappointing. Such was the case with these two 1982 cards. 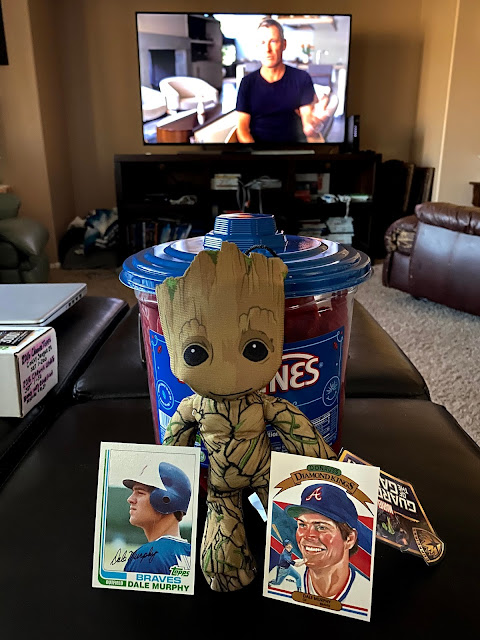 Thought I would get Groot into the post for P-Town Tom and also give you a little insight into my life. The Red Vines were purchased for an upcoming road trip, but we couldn't wait to break them open. In the background you'll notice that I'm watching the Lance Armstrong documentary. While I knew the premise, I found the details of the documentary super interesting and enjoyed it.

Next up are cards of Wally Joyner. I batted .500 on the Joyner cards by adding two of these cards to my binder. The Triple Play and the Leaf card were new to my collection. 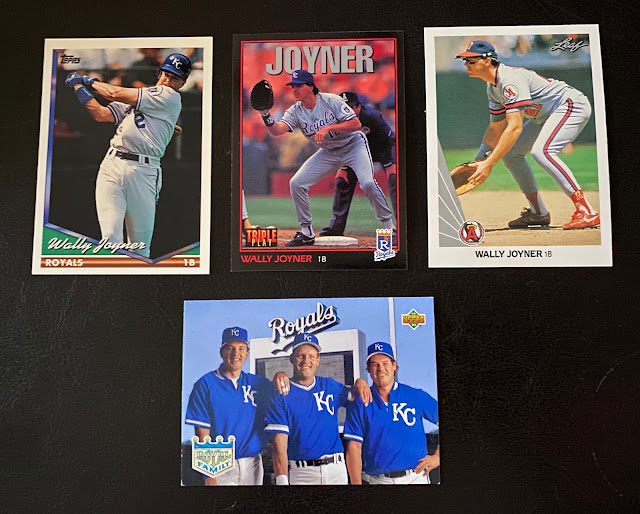 That's it for today. Prove me wrong about Dale Murphy. Is there anyone out there that doesn't like Dale Murphy? If you watched the documentary, LANCE, what did you think about it?
Posted by Daniel Wilson at 5:00 AM 3 comments:

More From the Box

I finished my post yesterday around 7:30 am on Saturday morning. After publishing it I checked my phone and I had a text from one of my Supervisors at work with bad news. Even more reason that I need to be blogging right now.

Let's take a look at some more cards from that 330 count box from my desk. 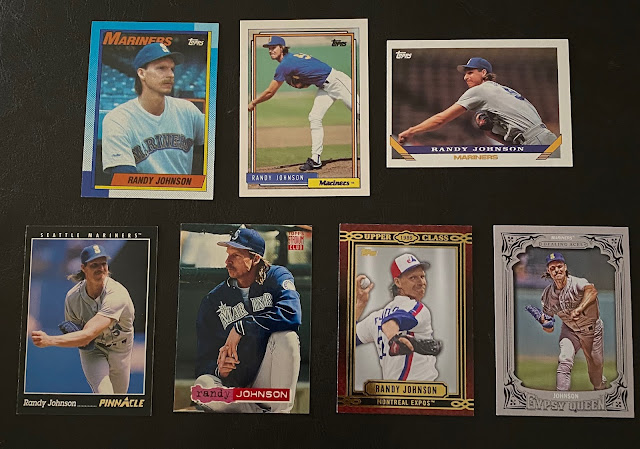 Here is another card that made it into a binder. The corners and edges aren't great, but that's probably because they are dark and it has been floating around in this 330 count box for a while, so now it will be saved from further demise in the binder with the rest of my modern Hank Aaron cards. Aaron is another guy that I want to collect all of his Topps cards, similar to my Nolan Ryan pursuit that I mentioned yesterday. The difference between my Nolan Ryan and Hank Aaron collecting goals is that I want all Topps cards of Aaron including his base, all-star, league leader, etc. cards and I collect his modern day stuff as well. With Nolan Ryan, I really just want his base Topps card from his playing days. 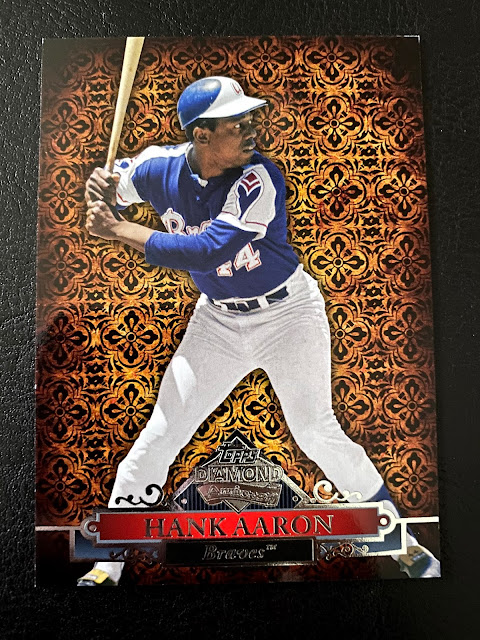 Who do you collect by default, like I do with Randy Johnson? Do you have players that you are going after all their Topps base cards or all their cards from their playing years?

I decided recently that I wanted to get back into blogging regularly. I need to. I need to take a step back from everything going on right now in the world and focus on something that brings me joy. Baseball cards.

2020 has been a crazy year. I took this picture the other day and I think it represents 2020 fairly well. 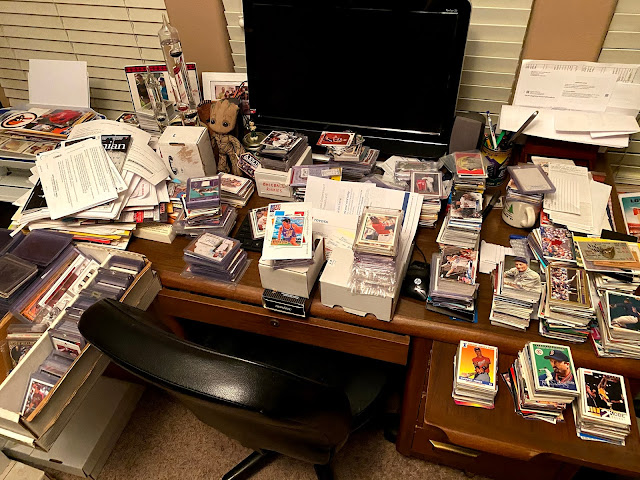 I've got a lot of work to do. Good thing I bought a laptop late last year or blogging wouldn't even be an option at this point.

I'm going to take some time going through everything; sorting and putting it where it goes or getting rid of it. So, let's get started.

I grabbed the 330 count box the is next to Groot. These are cards that I got as part of a Paul Goldschmidt collection that I bought shortly after he was traded to the Cardinals in 2018.

First up is a small group of Bryce Harper cards. Harper is a polarizing player. Most people either love him or hate him. I like him. I "collect" him. When I say "collect" Harper, I mean that I keep his cards when I come across them and I will pick them up in dime boxes when I come across ones I don't have. I don't have any relic or autographed cards. I do have an autographed SI magazine that my brother got for me. When my brother lived in Las Vegas he knew the Harper family. 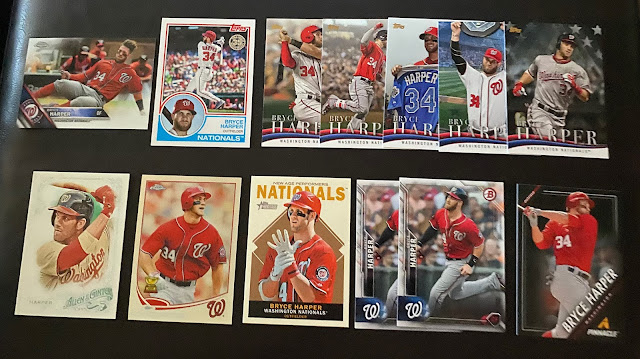 Let's see how many I don't already have and put them away. Okay, so out of the 13, I needed 10 of them. That gives me 54 total Bryce Harper cards.

Here are the dups. If you need one, let me know.

Let's finish up today's post with a small group of Nolan Ryan cards. Is there anyone out there that doesn't like Nolan Ryan? I know there are some people who don't think of him as a great pitcher, but he had a great career and his statistics are staggering. 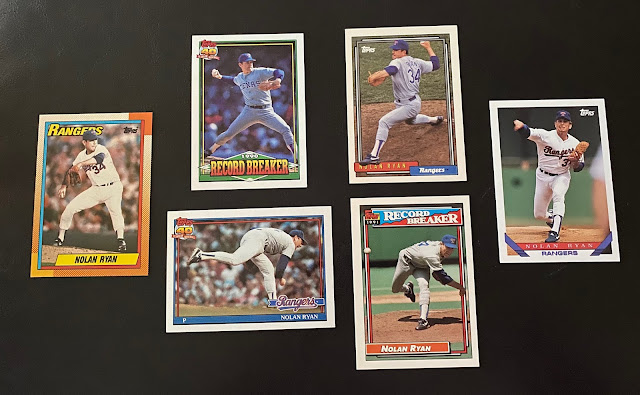 Because Ryan pitched for so long, for the longest time I have always wanted to have one of each of his Topps cards. It's something I've thought about since I was a teenager. I think it has something to do with the fact that his cards during his playing career spanned from 1968 - 1994, so not only would you get to see the player, Nolan Ryan, evolve on cardboard, but you would get to see the cardboard itself evolve. I'm sure I already have the 1990 - 1993 Topps base cards, but I'll save these just in case. Everything else is up for grabs. 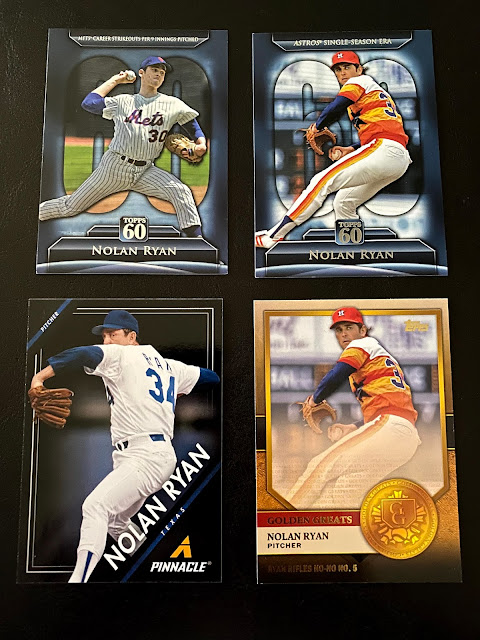 I've always loved this 1994 Stadium Club card of Nolan Ryan showing him tipping his cap as a final farewell to baseball fans and card collectors. 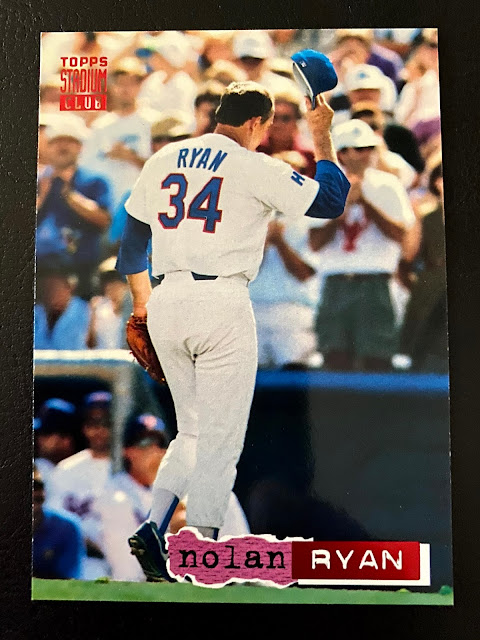 How about you? How is your card area looking these days?
Posted by Daniel Wilson at 7:19 AM 4 comments: