I've gone through a lot of self-reflection over the last couple of months. I nearly called it quits on this blog and on collecting in general, but as the late, great Yogi Berra said, "It ain't over till it's over."

With my mom passing away unexpectedly and then my grandpa passing away a month later and having to go through my parents things, it really put things into perspective for me. I'm going to make some changes to how I collect and what I collect, but I'm still collecting and I'm still blogging.

I saw these two Bowman Yogi Berra cards at my LCS and I just couldn't decide which one to buy, so I ended up getting both. Truth be told, if I could only have one, I would have picked the 1951, but I used the "If I buy both, will you cut me a deal?" card and it worked, so I'm now the proud owner of both a 1951 and 1952 Bowman Yogi Berra card. 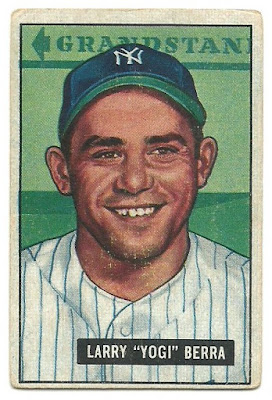 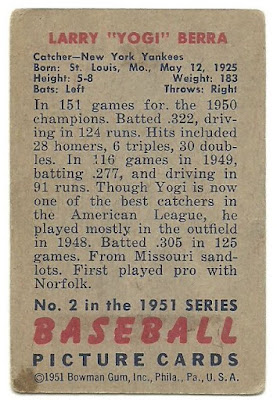 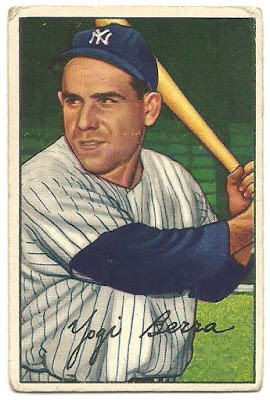 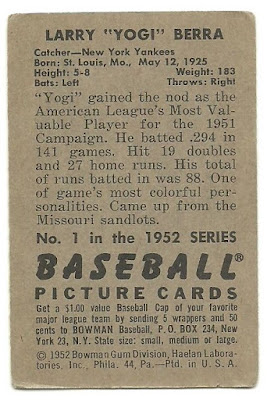 The backs tell an interesting story.

From the 1951 card we learn about Yogi's tremendous 1950 season. He batted .322 with 28 home runs and 124 RBI. He lost out on MVP to his teammate Phil Rizzuto and Boston Red Sox infielder Billy Goodman. Goodman won the A.L. batting title with a .354 average. Rizzuto batted .324 with 7 home runs, and 66 RBI. I realize there is more to MVP than just the big three, but I would love to hear someone rationalize Rizzuto over Berra in 1950.

Like I said before , my collecting habits are going to change going forward. I've got to focus on quality over quantity. I've got to reduce the overall size of my collection. Now I've just got to figure out how to do that. if you have any ideas, let me know.
Posted by Daniel Wilson at 4:00 AM 4 comments:

August 9th marked the 30th anniversary of the first night game at Wrigley Field. I posted about my autograph project on Twitter and it got quite a bit of traction.

I asked for help getting the one final autograph I needed; Damon Berryhill, who is the manager of the AAA Gwinnett Stripers. I got a reply from someone who attends Gwinnett Stripers games who said they would try to get Berryhill to sign for me at a team event.

He came through and I was able to finish my project. I posted about it on Twitter when I got the card in the mail, but I realized I didn't post about it on here. 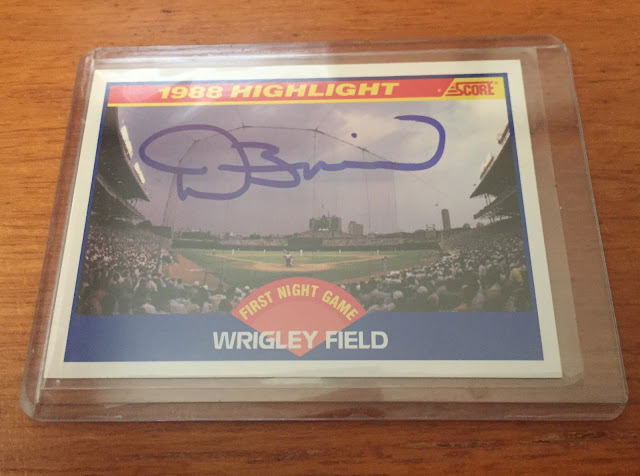 Here is the complete project. 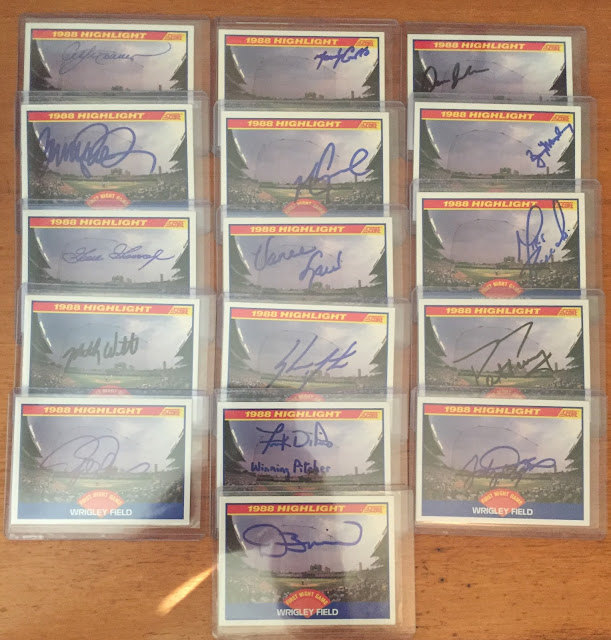 Cards are scanned and so the 5 minute timer starts now.

I got a PWE a week or so ago from Bru. He included a few more cards for my player collections. 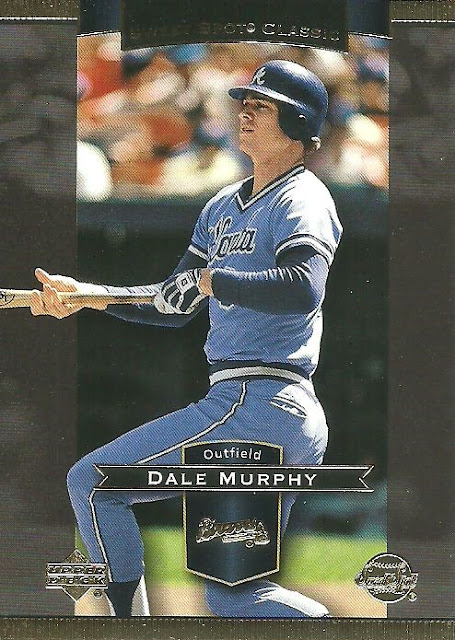 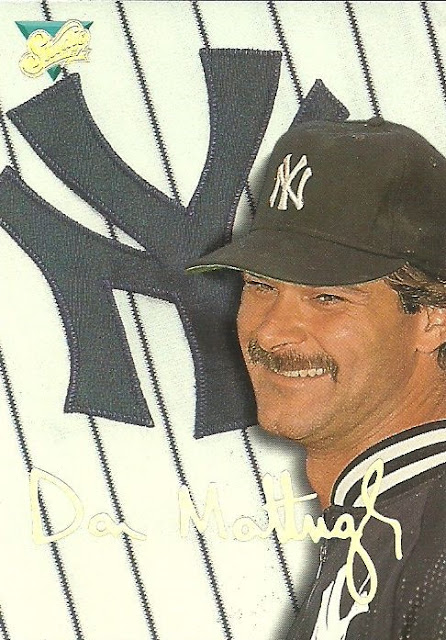 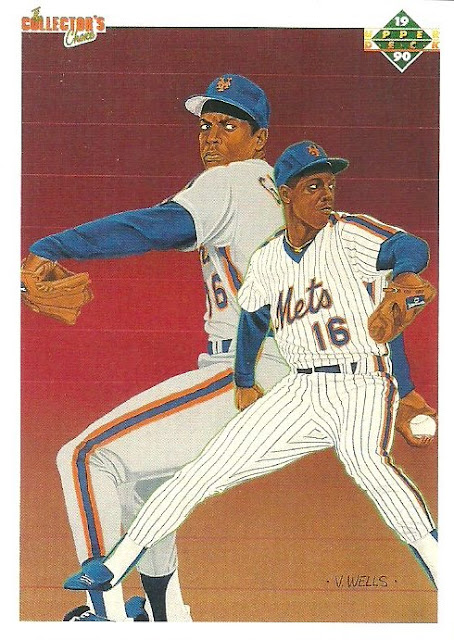 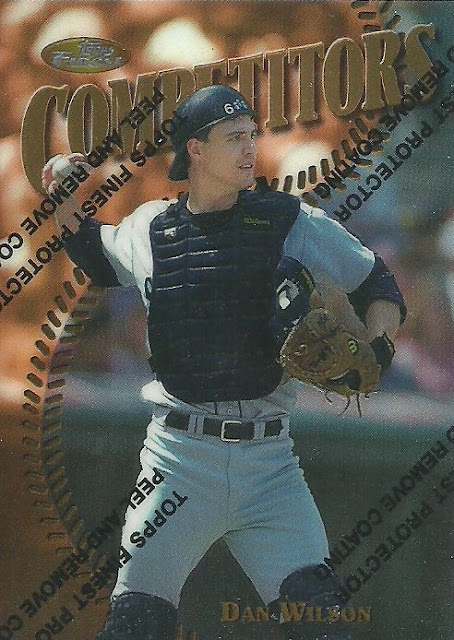 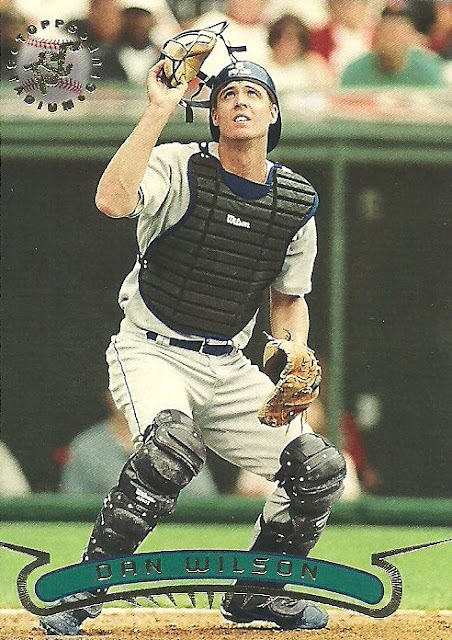 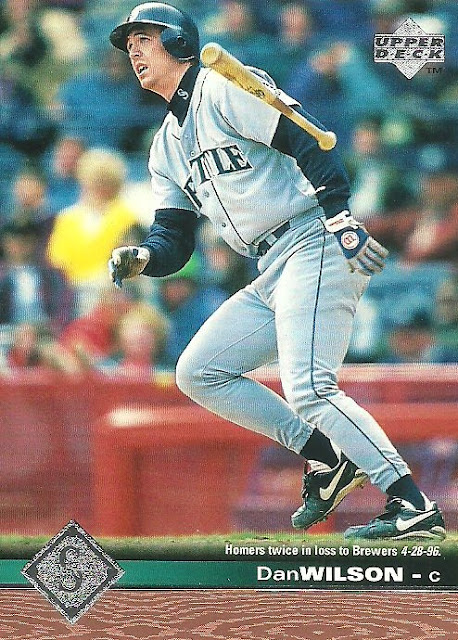 I needed all the cards in this post, so there were some nice additions to my collection. Thanks Bru!

This is all I wrote in 5 minutes. Thanks Julie!

I'm trying another 5 minute post. Let's see how it goes.

This time it's a trade post. Julie of A Cracked Bat, sent me a bunch of sweet D-Backs cards. 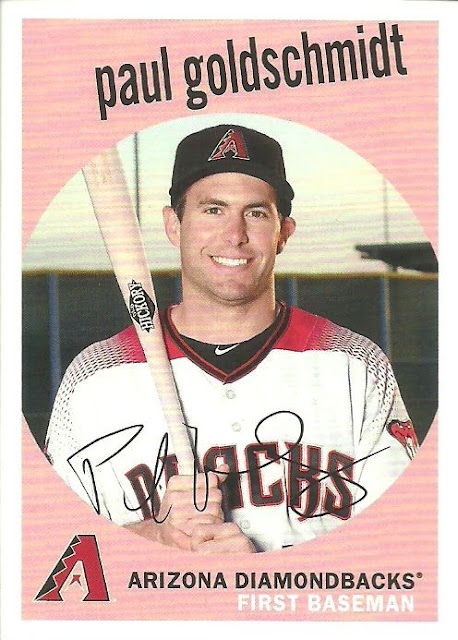 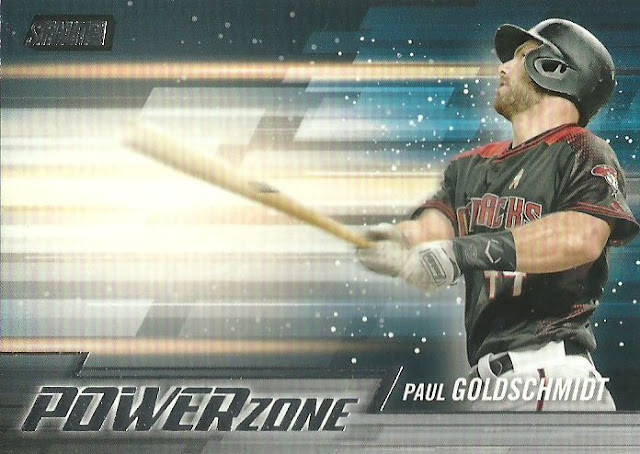 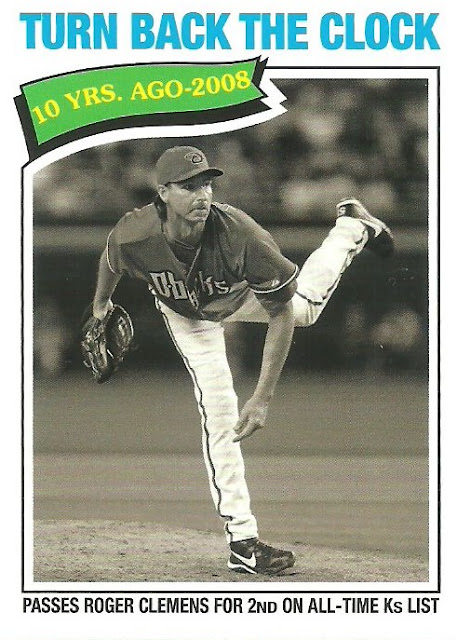 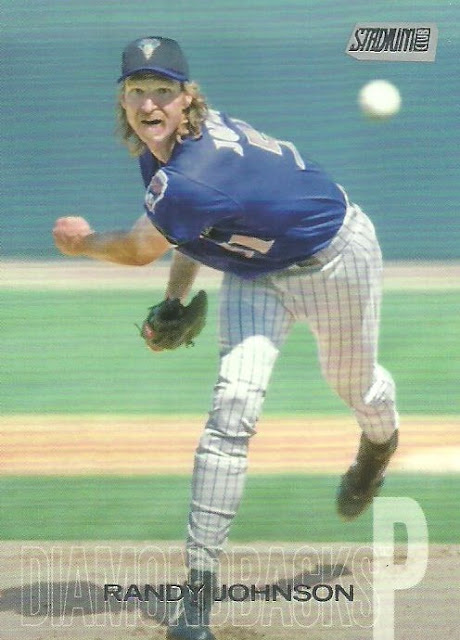 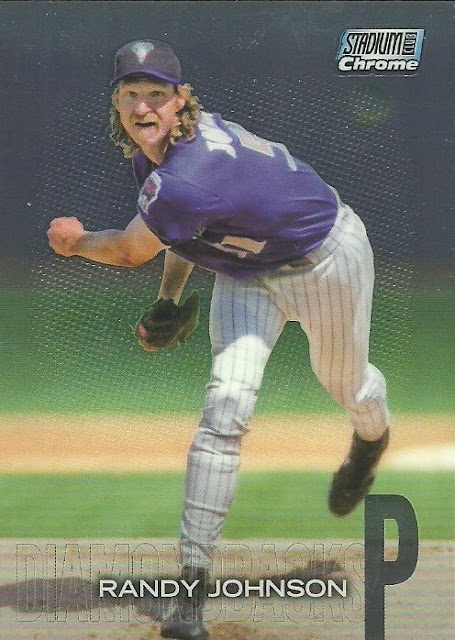 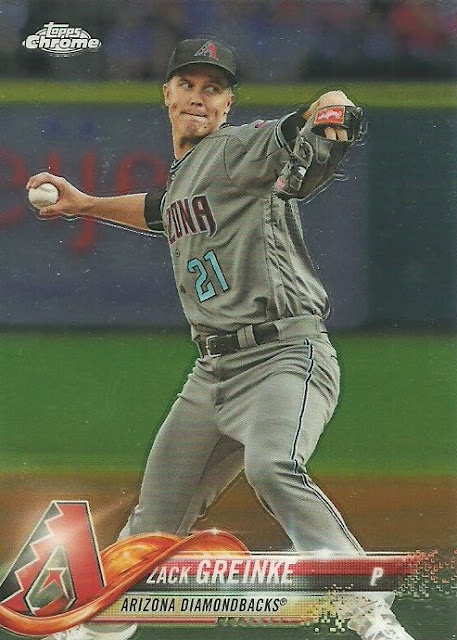 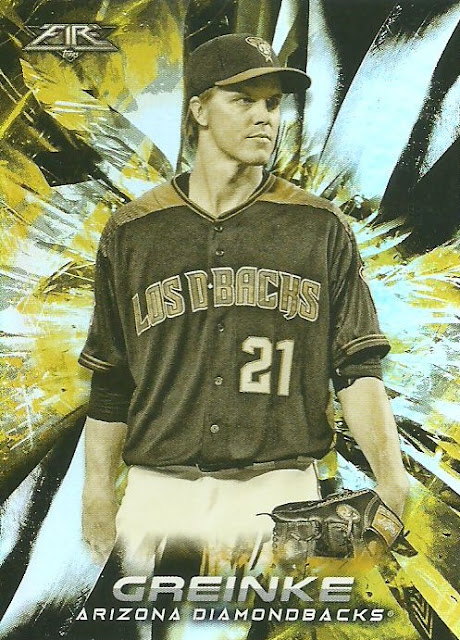 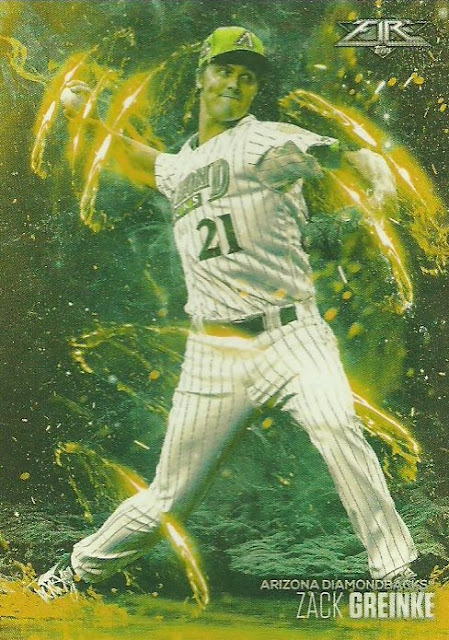 I'm going to try something to help me get back into the habit of blogging regularly. I'm going to do a 5 minute post. I set a timer on my phone for 5 minutes and when it's done I'm going to publish whatever I've got.

Sometimes I will sit at the computer for an hour watching a show or movie while working on a post and I don't get very far. Other times I start typing and then think about it for a while and then start all over. This process may repeat itself several times and I end up with nothing.

Back in early August I made a COMC purchase. I picked up a few things that I haven't gotten to share, so here is one of the cards from that order.

It's a 1997 Bowman's Best Atomic Refractor of Tim Salmon. 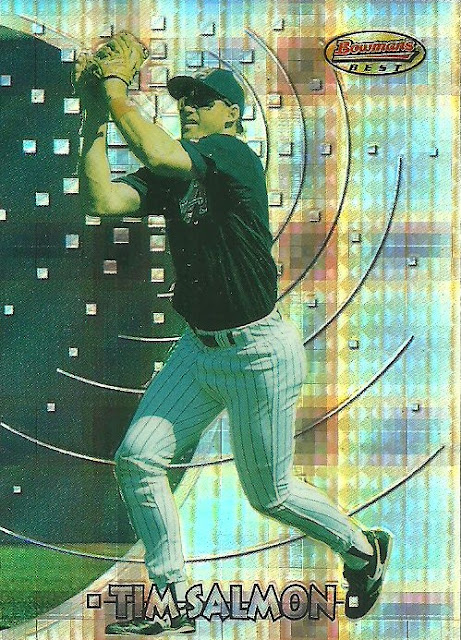 Well, 5 minutes goes by pretty fast. If I actually stuck to the 5 minutes, there would have been no picture, title, or this last paragraph.
Posted by Daniel Wilson at 7:30 PM 6 comments: