On Veteran's Day I got a chance to go to AZ Sports Cards and got a couple of cards from a showcase, but spent the majority of my time digging through their 15/$1 boxes. That makes the cards roughly 7 cents. I ended up grabbing 98 cards and they gave it to me for $6. That puts them closer to 6 cents each.
One of the boxes had a row of D-Backs cards. The majority of the cards I grabbed came from this row. So buckle up and get ready for some great Diamondbacks cards.
Travis Lee was my first favorite D-Backs player and so I have a section of a binder his base and inserts. Autographs and relics are in a separate box.
Of these cards I actually needed all but the Bowman's Best card. These new additions put me at 102 different Travis Lee cards. 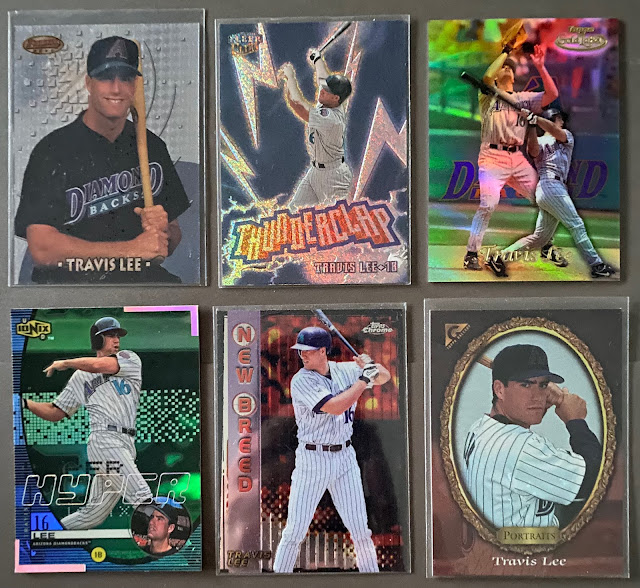 The Thuderclap insert card is fantastic!
Here is a look at my the majority of the Travis Lee cards that aren't in the binder. 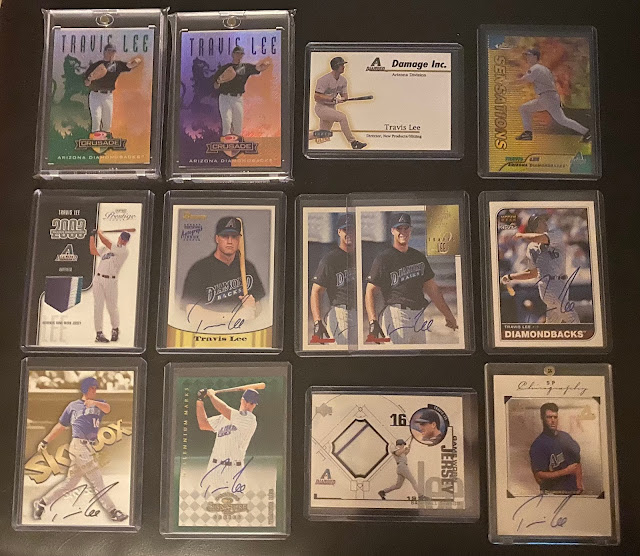 The autographs that are doubled up are different. One is black and the other is blue ink.
One day I hope to add a Red Crusade to my collection, but they are pricey. Other than that, I'm not looking to add any other Lee cards to my collection specifically, but if they are only 6 cents apiece I will probably grab them.
As a D-Backs fan, obviously I'm very familiar with Travis Lee. Curious to see what memories everyone else has of Lee. Let me know.
Posted by Daniel Wilson at 3:00 AM 1 comment:

Roger Maris is on the Golden Era Days Hall of Fame ballot. I'm not going to go into a lot of detail about Maris because I'm sure most of you reading this are familiar with his exploits.
I picked up his rookie card recently off of Twitter from Breakout Cards. It's got a crease all the way across and a scuff mark below that and the corners and centering aren't prefect, but all of these issues combined put it in my price range. 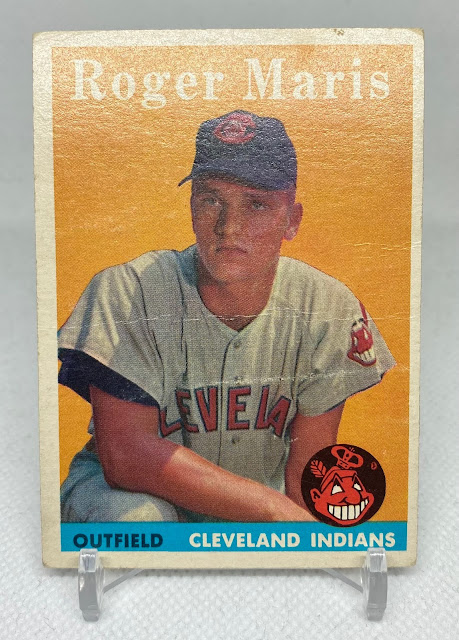 Rog, as the back of his 1958 Topps card refers to him as, will forever be a part of baseball history for breaking Babe Ruth's single season home run record in 1961. 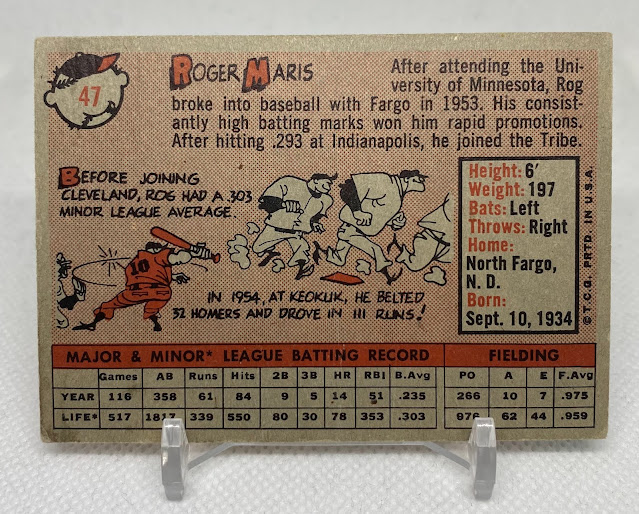 While certainly a part of baseball history, I don't think Maris will make the Hall of Fame this year or any year. His career numbers just don't warrant his selection, in my opinion. Let's look at the big three. Roger had a career .260 batting average, 275 home runs, and 850 RBI over his 12 year career. Those just aren't Hall of Fame numbers.
What do you think? Does Roger Maris get into the Hall of Fame?
Posted by Daniel Wilson at 3:00 AM 5 comments:

I did a search on my blog for Billy Pierce and came up with nothing. I was familiar with him, but it appears that I've never posted about him before. That changes today.
A couple of days ago the Baseball Hall of Fame announced the candidates for the Early Baseball Era and Golden Days Era voting which will take place in December. Today I want to take a closer look at one of the players on the Golden Days Era ballot.
Here is a list of all the candidates.
Dick Allen
Ken Boyer
Gil Hodges
Jim Kaat
Roger Maris
Minnie Minoso
Danny Murtaugh
Tony Oliva
Billy Pierce
Maury Wills
To get in, candidates need 75%+ of votes from a panel of 16 voters. The last Golden Days Era voting did not result in anyone getting into the Hall. Dick Allen and Tony Oliva came close with 68.8% of the votes. Jim Kaat got 62.5%, Maury Wills got 56.3% and Minnie Minoso got 50%. Boyer, Hodges, and Pierce each got 3 or fewer votes last time around.
Roger Maris and Danny Murtaugh are new to the ballot this time.
It will be interesting to see who gets in, if anyone. Based on the percentages from the last time, I would guess Allen and Oliva make it. It will be interesting to see how many votes Maris gets.
I want to focus on someone who I don't think will make it, but I think deserves more attention from votes and, as I mentioned above, myself.
Billy Pierce played in briefly in 1945 with the Tigers before graduating high school. He would spend 1946 and 1947 in the minors before making it back to the Tigers in 1948. The Tigers would trade Pierce to the White Sox in November of 1948 for catcher Aaron Robinson and $10,000. The Tigers instantly regretted the trade and tried to get him back the next day, even offering the White Sox $50,000 to undo the trade. Pierce would become the ace of the White Sox staff between 1949 - 1961. He would spend the last three years of his career with the San Fransisco Giants.
Let's take a look at his Win-Loss record, ERA and Strikeout totals over his 17 year career.
Win-Loss Record: 211-169
ERA: 3.27
Strikeouts: 1,999
His 211 wins is more than Don Drysdale, Lefty Gomez, Roy Halladay, Sandy Koufax, Bob Lemon,  Rube Marquard, Hal Newhouser, Dazzy Vance, Rube Waddell, Ed Walsh among others who are all in the Hall of Fame.
His 3.27 ERS is better than Bert Blyleven, Tom Glavine, Lefty Gomez, Burleigh Grimes, Jessie Haines, Roy Halladay, Waite Hoyt, Fergie Jenkins, Randy Johnson, Jack Morris, Mike Mussina, Phil Niekro, Herb Pennock, Robin Roberts, John Smoltz, and Early Winn among others who are all in the Hall of Fame.
His 1,999 strikeouts are more than Whitey Ford, Lefty Gomez, Carl Hubbell, Bob Lemon, Hal Newhouser, Herb Pennock, Red Ruffing, and Ed Walsh all who are in the Hall of Fame.
I realize it's hard to compare stats of players from different eras. So let's compare Pierce to just one Hall of Famer from his same era. Whitey Ford played in 1950 and then from 1953 - 1967 and he was elected to the Hall of Fame on his second year of eligibility.
Here is Whitey's Win-Loss record, ERA and Strikeouts.
Win-Loss Record: 236-106
ERA: 2.75
Strikeouts: 1,956
Ford pitched his entire 16 year career for the New York Yankees and won 6 World Series titles with them. He won just 25 more games than Pierce. Ford has Pierce soundly beat in the ERA category, but Pierce bested Ford in strikeouts, by 43. The two would routinely match up against each other as the Yankees and White Sox would battle each other throughout the latter half of the 1950's.
Should Billy Pierce get into the Hall of Fame. I don't think so. Will he get in. No. But was he a great player. Yes. He was a great baseball player who I believe deserves more respect among baseball fans and card collectors.
Speaking of cards, I picked up a couple of "Bill" Pierce 1951 Bowman rookie cards from The Batter's Box card shop the other day. Neither are in great shape, but I love them. 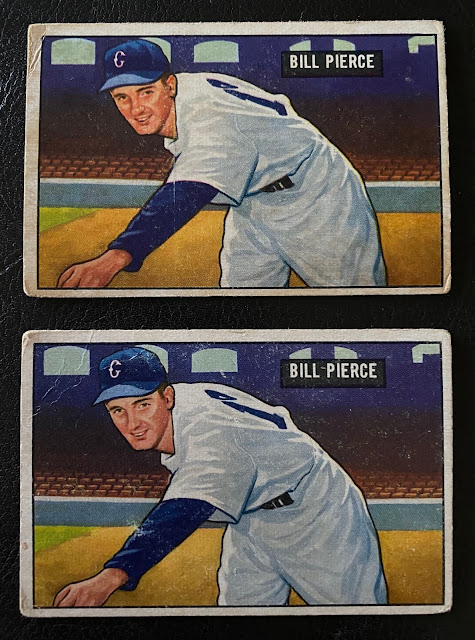 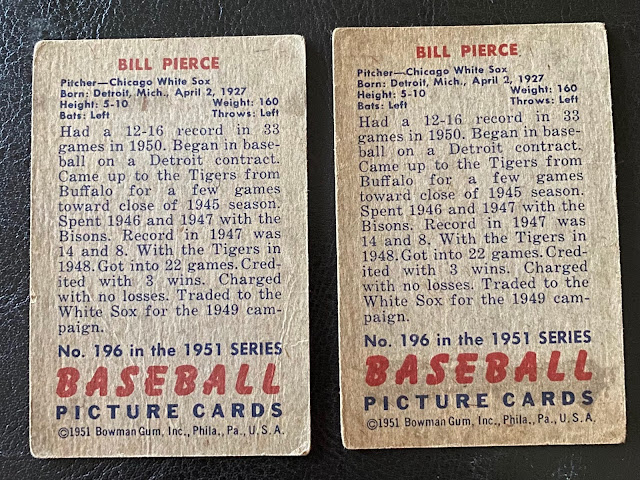 Who do you think makes it in from the Golden Days Era vote?
Posted by Daniel Wilson at 3:00 AM 2 comments:

Yesterday I went to a card shop and picked up some 1984 Donruss cards hoping that I needed them for the set I'm working on. I ended up grabbing 47 cards ranging from 4 cents to $1 apiece, hoping I needed them for my set. I checked my phone, but couldn't find my needs list so I made the purchases blind.
I ended up needing 19 of the cards for my set, so I did pretty well, but it's weird that I couldn't find my 1984 Donruss Needs list on my phone because I found it right away when I searched on my computer.
Here are the cards I needed. 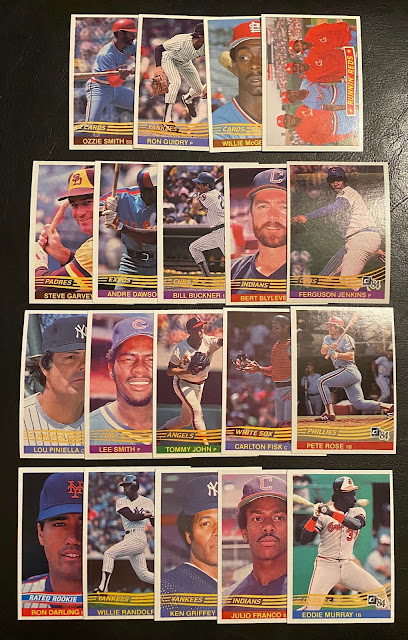 The Ron Darling is the No Number version.
I also grabbed a bunch of 1983 Donruss Diamond Kings since I'm trying to collect all of the Diamond Kings cards. I needed these 6, but I ended up with 8 cards I didn't need. I need to get an updated list together of all my Diamond King needs. 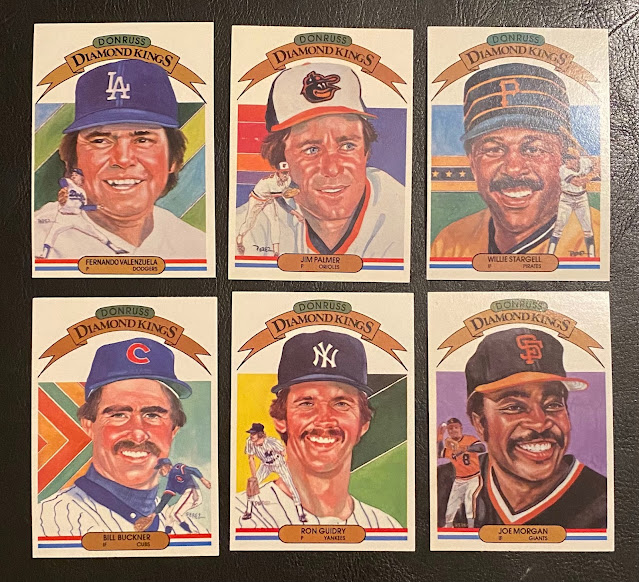 I also grabbed 8 Hall of Famers and a Fernando Valenzuela card from the 1983 Donruss set just because they were a dime each. 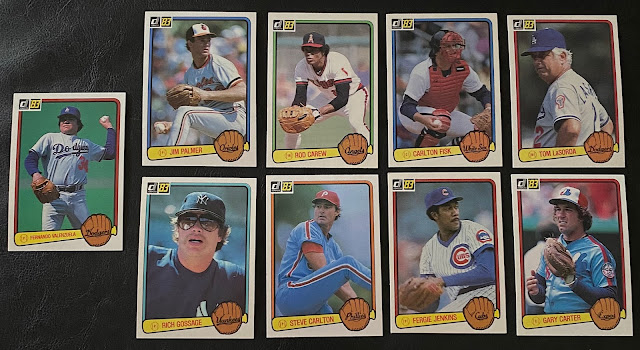 I bought more than this yesterday, but these are all the Donruss purchases, so I'll stop here for now.
Posted by Daniel Wilson at 7:25 AM 2 comments:

An O-Pee-Chee purchase with my Canadian friend!

This past Tuesday I had the opportunity to meet up with Angus of the blog Dawg Day Cards. He was in town and reached out to see if we could get together before he went back home.
He had a 1971 Topps Pirates team card for me for the set I was working on and I had a few 1991 football factory sets I had set aside for him, so in addition to hanging out at the card shop, we got to swap some cards. I should also mention that Angus added a drone for me and my boys because Angus is awesome and super thoughtful.
Here is the 1971 Topps Pirates team card Angus had for me. He assured me that he didn't pay $0.25 for the card. I'm sure he didn't. This card is in fantastic shape and is a huge upgrade for my set! Thank you so much Angus! 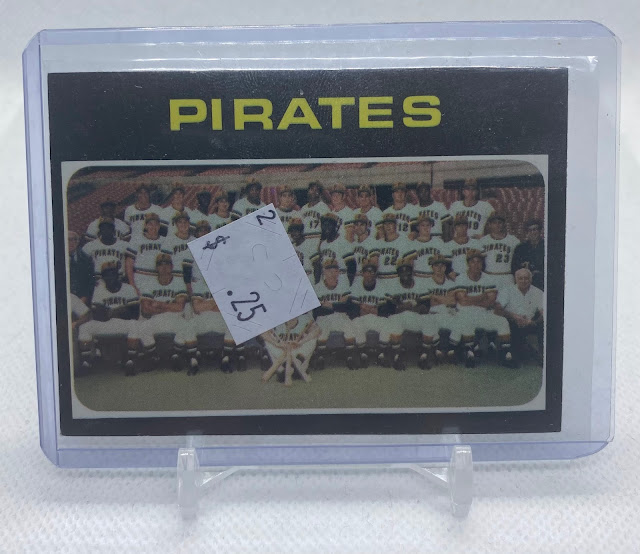 Here is the card it replaces. 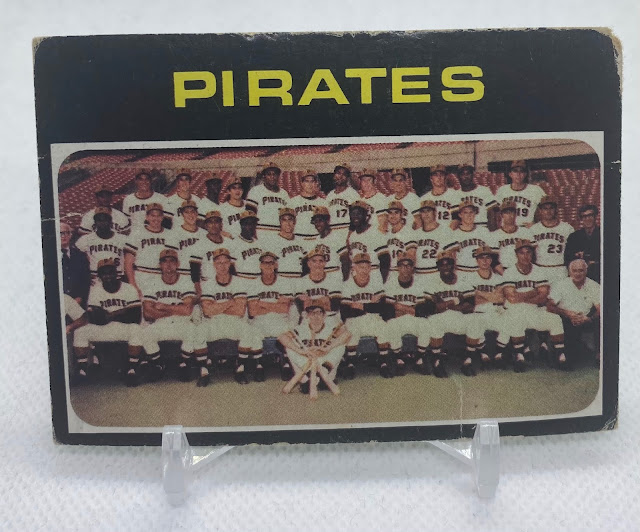 It looks fantastic in the sheet, right under the great Willie Mays. At some point, I'd like to upgrade the Mays. 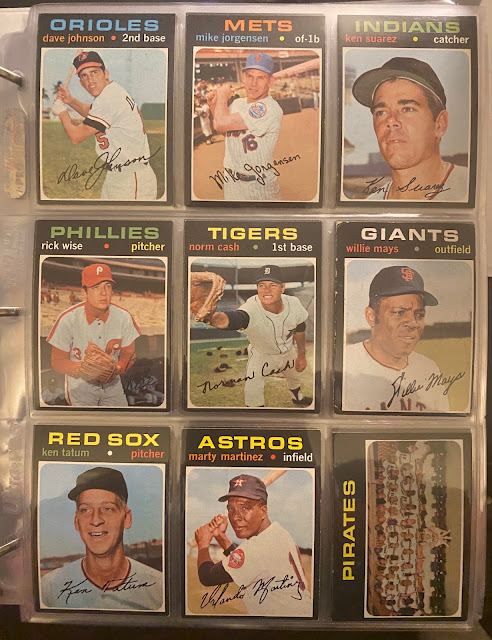 We spent about an hour at the shop looking in showcases and boxes. Angus found some great cards, and some not so great cards (let's be honest, he collects Browns cards) for his collection and he added a few cards to his pile for other bloggers.
I found a couple cards to add to my collection. I thought it was appropriate that I add this O-Pee-Chee Don Mattingly rookie card to my collection while I was at a card shop with Angus, who is from Canada.
I have the 1984 Topps Mattingly rookie card already, but I have been kicking myself for a while for not picking up the O-Pee-Chee and Nestle versions when I had the chance a couple years ago. Now I just need to keep an eye out for the Nestle version. 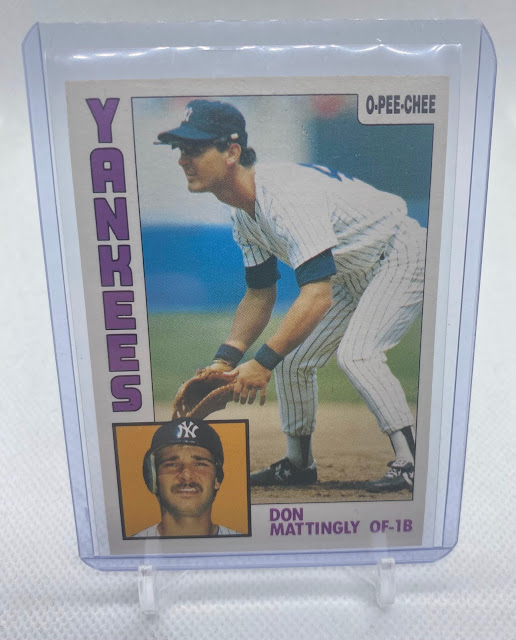 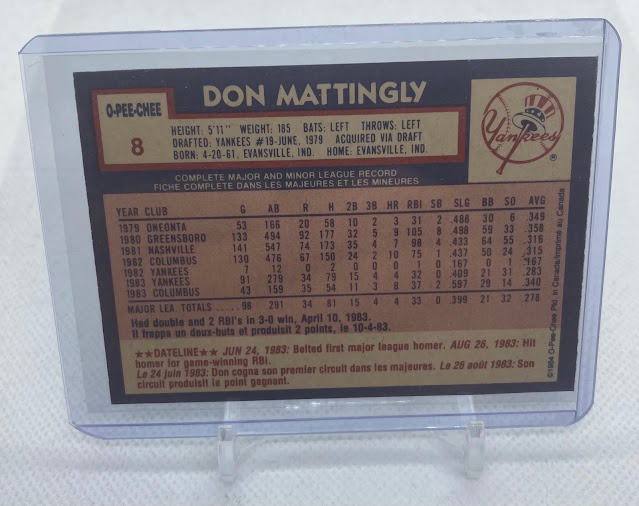 The other card I grabbed was this 1953 Topps card of Willie Miranda. It's in rough shape, but I love it! 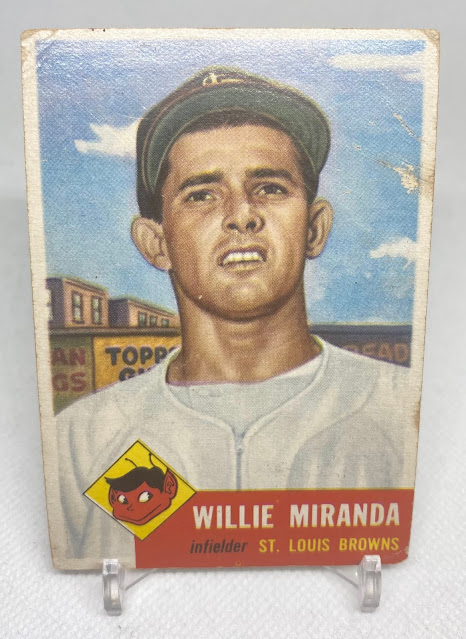 It's from the tough 4th series and it just a few cards away from being the final card in the set. Not only that, but it's one of 3 cards in the 1953 set where the artist added a Topps Gum advertisement in the background. I already have the Clem Labine. With the addition of the Willie Miranda I just need to add the Sid Hudson card to my collection. 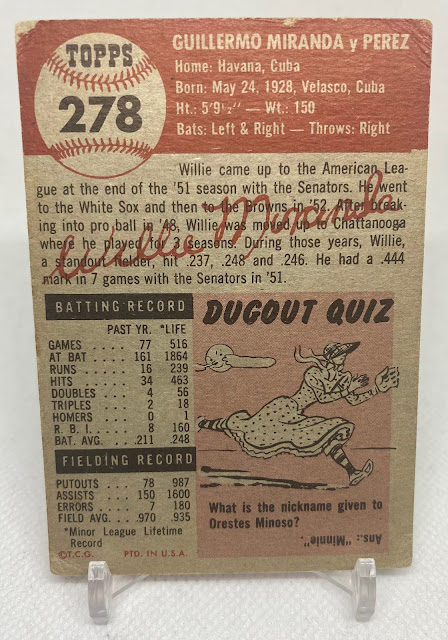 Really enjoyed visiting with you Angus and browsing and talking cards. Wish you all the best and if you do end up coming back to Arizona, let me know.
Posted by Daniel Wilson at 3:00 AM 15 comments: