I got a text the other day from my niece. She had an extra ticket to a D-Backs game and wanted to know if I wanted to go with. She had gotten the tickets for my brother for his birthday. It was supposed to be my brother and his three kids, but an unfortunate accident (nothing life threatening) left my nephew unable to attend. So I got the invite and was delighted to attend and cheer on the D-Backs from just 5 rows behind the home dugout. I know it says Row 10, but it started at Row 6.

This was my view. 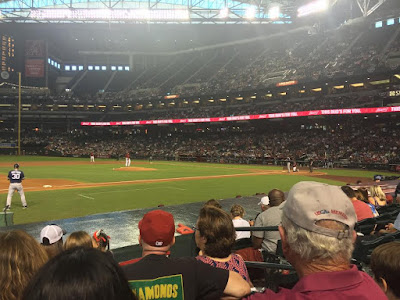 Aside from great seats, the game was entertaining as the D-Backs beat the Padres 6-3. Archie Bradley got his first home start of the year and had a career high 9 strikeouts. It was also nice to spend some time with my brother on his birthday and two of my nieces.

My brother and nieces left as soon as the game ended, but I opted to stick around hoping to get something from the dugout. It wasn't looking good, and then one of the D-Backs staff members tossed up a batting glove to a little girl standing about 10 feet away from where I was standing. Nobody saw it there laying on the ground, so I walked over, picked it up and gave it to the little girl. I looked at the staff member to let him know I had given the glove to the girl. he acknowledged me and then went back into the dugout and came back quickly and tossed a piece of paper up on the roof of the dugout. I grabbed it, not knowing what it was.

When i turned it over I saw this. 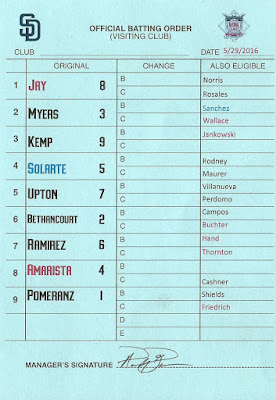 It's the Padres lineup card that they had given to the D-Backs. It's fairly small. Probably about 5 x 7. Not as cool as a glove, but still a cool memento from the game.

What's the coolest game-used thing you've ever gotten from a baseball game?
Posted by Daniel Wilson at 3:05 PM 6 comments:

Yasmany Tomas did a signing last Friday at a local Boost Mobile store. Being unemployed does have some benefits. It meant that I could attend the signing which started at 11 am. Being the responsible parent that I am, I had my two oldest miss school so they could attend as well (they have less than 2 weeks left of school and didn't have any tests or anything like that). My wife and my youngest also came, so there were 5 of us total, hence the 5 cards you see below.

They did have about 40 pizzas for the 60 people that showed up, as well as frozen yogurt and Baxter showed up as well. Here he is with a couple of my kids. You can see the person in the background with the Tomas jersey, waiting for him to arrive. 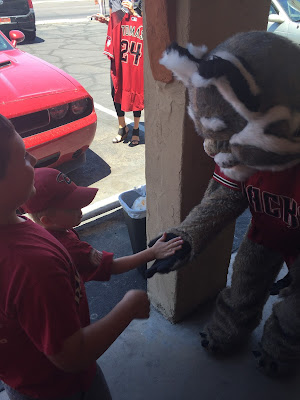 Tomas was really nice. Here are a couple of pics of him signing the cards. 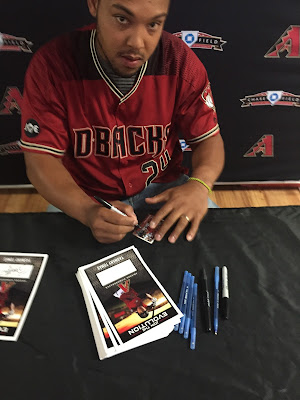 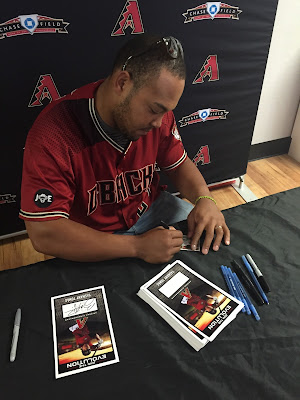 Love this card! It's from his MLB debut, which took place on Jackie Robinson Day, 2015. You can see he is wearing #42. I think it turned out great! 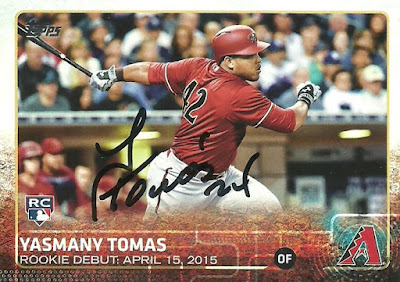 Had a couple of these 2016 Topps cards that he signed. The second one got smudged a little bit. 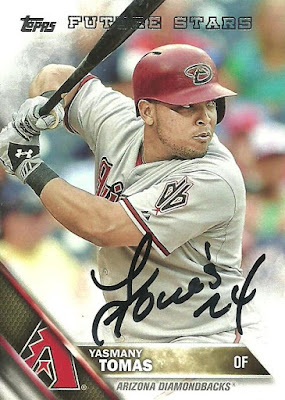 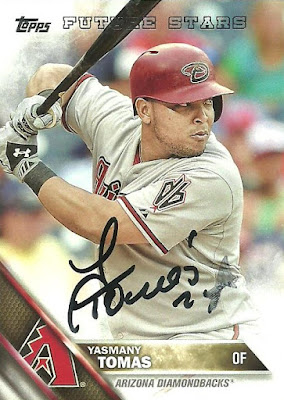 This 2016 Gypsy Queen was part of the team set that my friend Joe recently gave me. 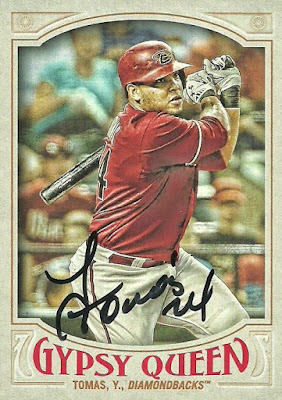 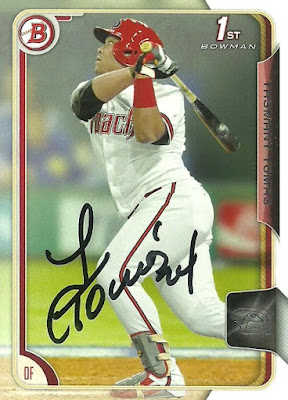 Finally, here is a picture that my wife took of my boys and I with Yasmany. Big thank you to Tomas, the Diamondbacks and the Boost Mobile store for a fantastic event! 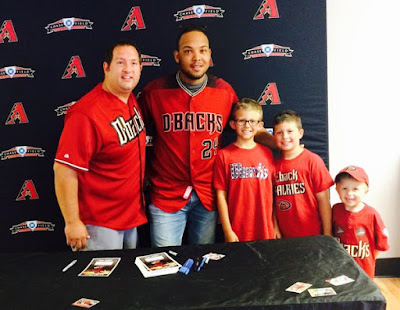 First bobblehead of the 2016 season!

I'm a bit behind posting this, but better late than never...right?

I haven't mentioned this yet, but I was laid off on April 4th (Opening Day). After 12 years working for the same organization it was difficult to hear that I was no longer needed. This has led to lots of changes in our household including no spending on things like baseball cards and Diamondbacks games.

The Diamondbacks gave away their first bobblehead of the 2016 season on Saturday, April 23rd and I wasn't planning on attending, but my good friend Joe, of the blog Catching Rays!, was and graciously offered me a bobblehead.

About noon on the 23rd my wife got a text from some friends asking if we wanted tickets for the game. I took my oldest son and we went and were able to get a bobblehead. 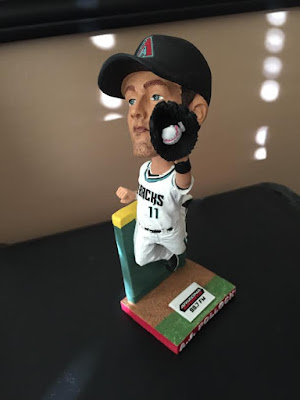 While at the game I thought I saw Adam, of the blog Thoughts and Sox, walking down the isle and so I text him to see if he was at the game. He said he was and asked if I was there or if I needed him to save a bobblehead for me. I let him know that I was at the game and asked him what section he was in. He was in the same section as us, but was quite a bit closer to the field. He actually had a few empty seats by him so he invited us down and we sat with him for a bit. it was great to chat with him.

My son and I went to the upper level so he could play wiffle ball and when we came back a few innings later there was an older gentleman sitting in our seats so we just moved across the isle to some empty seats. Soon after the D-Backs hit a home run and most of the crowd, including myself stood up. While standing up I noticed that my niece and some of her family was there at the game so I went over and said hello.

The D-Backs ended up winning and my son and I had a much needed great time. I just want to publicly thank Joe and Adam for being willing to give me a bobblehead and for Tyler and Deeann for giving us the tickets.

In order to fit the AJ Pollock bobblehead on my shelf I had to do some rearranging. I also added some risers so that some of the bobbleheads in the back are up a bit. Here is what the shelf looks like now. 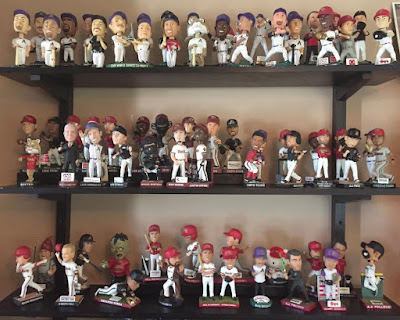 Don Beebe is probably most famous for running down Leon Lett during Super Bowl XXVII and striping the ball just prior to Lett crossing the goal line even though the Bills were down 52 - 17 at the time. 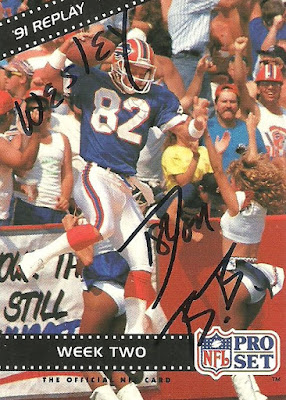 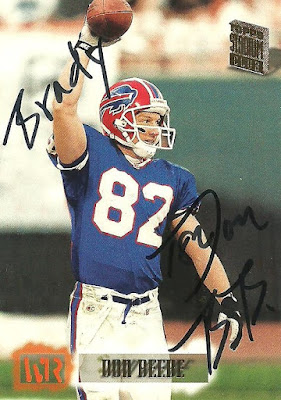 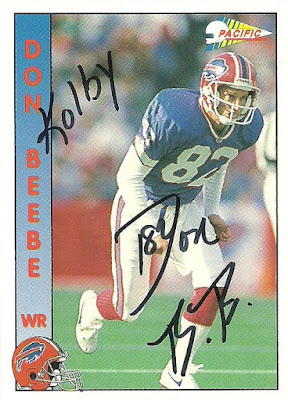 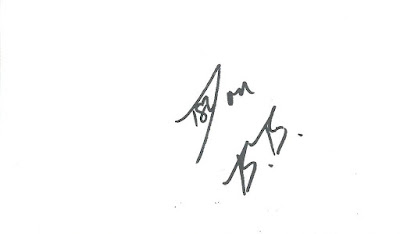 I sent a ttm autograph request to Hall of Famer Dan Fouts and he returned these three cards signed shortly thereafter. Fouts was a 6 x Pro Bowler and the 1982 NFL MVP. 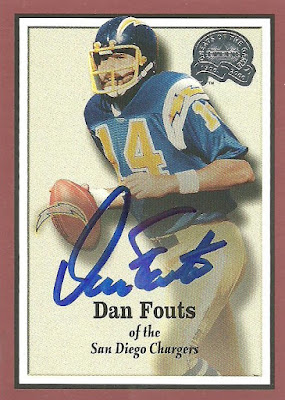 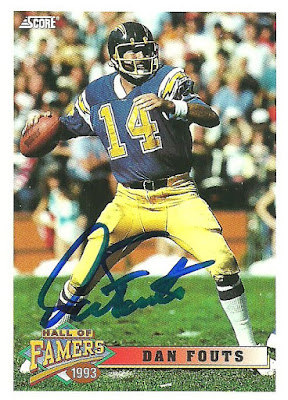 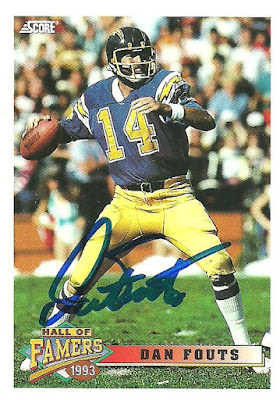 I came across this card and had to watch the play online. I sent it to Bill Brundige to sign it since he blocked the field goal and is pictured on the card (#77 for the Redskins). He signed the card and as you can see he smudged it a bit with his fingerprints. He also signed an index card for my boys. 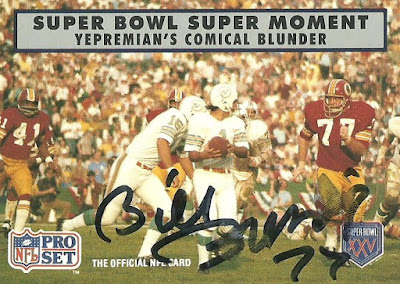 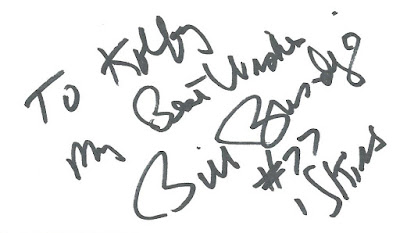 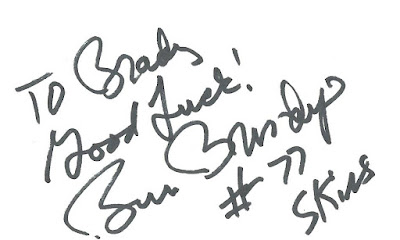 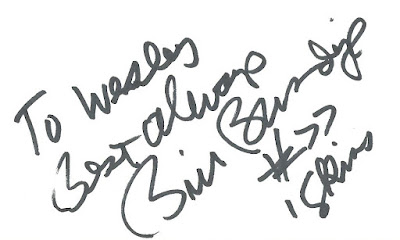 I thought it would be appropriate to post this recent ttm autograph today. Let me know if you know why. 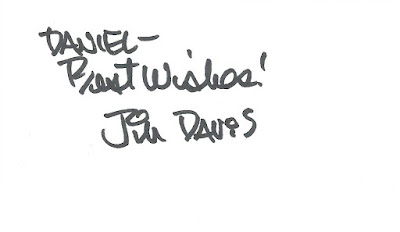 Archie Manning had a great football career. He's a member of the College Football Hall of Fame and was a 2 x NFL Pro Bowler. He's probably best known though as the father of Peyton and Eli Manning.

I sent this Upper Deck NFL Legends card to him and he sent it back signed in a few weeks. 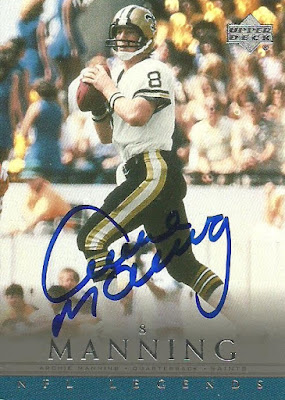 I got Peyton to sign a card for me ttm a few years ago. This Archie will go nicely with the Peyton and I just recently sent a card to Eli, so I'm hoping to add him to my collection soon.

Anyone out there have autographs of all three Mannings?
Posted by Daniel Wilson at 7:00 AM 4 comments: