This past Saturday I went to The Batter's Box card shop. I made it there just as the 1 PM auction was starting. I ended up getting one item in the auction; a small lot of 1970 Topps high numbers. It was just 4 cards, but I needed all 4 and I got it for $2.50 and used a comp card for $2 off, so I only spent 50 cents out of pocket for the 4 cards.
I did buy one other card at the shop though. It was this 1954 Jim Rhodes card. If Jim Rhodes doesn't sound familiar, it might be because he didn't go by Jim. He went by the nickname Dusty throughout his 7 year MLB career. 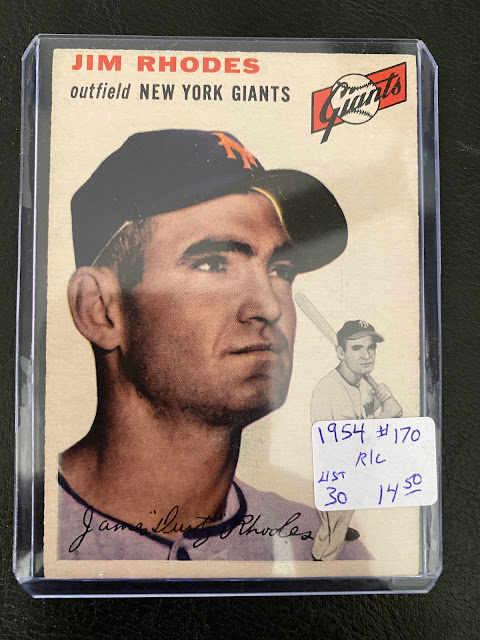 1952 was Dusty's rookie season, but he didn't get a card until 1954. Somewhat fitting because 1954 was the greatest season in his brief career. Used primarily as a pinch hitter, Dusty would play in just 82 games and only had 164 at bats. He made the most of the opportunities and batted .341 with 15 home runs and 50 RBI.
Then came the 1954 World Series. The New York Giants would face the Cleveland Indians in the Fall Classic. Not only did the Indians win the American League pennant, but they set a league record with 111 wins. Keep in mind, they only played 154 games, so the Indians only lost 43 games during the regular season. They were heavily favored to win the series, but the Giants had other plans.
Game 1 featured "The Catch"; and as Mays himself would describe, "The Throw". Possibly the greatest and if not the greatest, then certainly the most well-known defensive play in World Series history. "The Catch, would keep the score tied at 2 in the 8th inning. Still tied at 2, Dusty came into the game as a pinch hitter in the bottom of the 10th, for future Hall of Famer Monte Irvin, and hit a walk-off home run off of future Hall of Fame pitcher Bob Lemon.
In Game 2 Dusty would enter the game in the 5th; again as a pinch hitter for Monte Irvin. This time Rhodes would bat against Early Wynn; another future Hall of Fame pitcher. Cleveland was up 1-0 at the time. Rhodes would single and drive in a run to tie the game. He stayed in the game and homered off Wynn in the 7th giving the Giants a 3-1 lead, which would be the final score.
Dusty entered Game 3 in the 3rd inning; again pinch hitting for Irvin and would hit a 2 run single which extended the Giants lead to 3-0. The Giants would go on to win the game 6-2, meaning that technically Rhodes had the game winning RBI back in the 3rd inning.
The Giants would go on to sweep the mighty Indians in 4 games and Rhodes was not needed in the final game as the Giants would win 7-4.
Rhodes had just 7 plate appearances in the World Series, but he would collect 4 hits and a walk in those 7 plate appearances. 2 of the hits were home runs and he scored twice and drove in 7 runs.
On September 29, 2017 the World Series MVP award was renamed the Willie Mays World Series Most Valuable Player Award in honor of it being the 63rd anniversary of "The Catch" in the 1954 World Series. The award was around in 1954. The World Series MVP Award was first given out one year later in 1955. Willie Mays never actually won the award and he has gone on record as saying that if the award had been given out in 1954 it should have gone to Dusty Rhodes and not himself.
I'm reading a biography about Willie Mays and when I read that he would have awarded Rhodes the MVP award had it been issued, I immediately looked for his 1954 Topps card. Lots to choose from on eBay, but I thought I would check at my LCS. They actually had two copies. This one that I bought for $14.50 and another one that was $10.95. The later actually had a whiter white, but the one I bought was centered a bit better top to bottom and the corners were just a bit better, so I paid the extra.
Fun fact. Dusty's stellar performance in the '54 World Series resulted in him taking the #1 spot in the 1955 Topps set.
Posted by Daniel Wilson at 3:00 AM 2 comments:

This past Saturday I went to a card shop and picked up this 2022 Topps Opening Day set. For just $4.99 I couldn't say no. Eventually I'll get more sheets and put it in a binder. I have a stack of cards and multiple set waiting on sheets as I type this. For now though, I'm okay adding this to my collection and having it sit in a box. 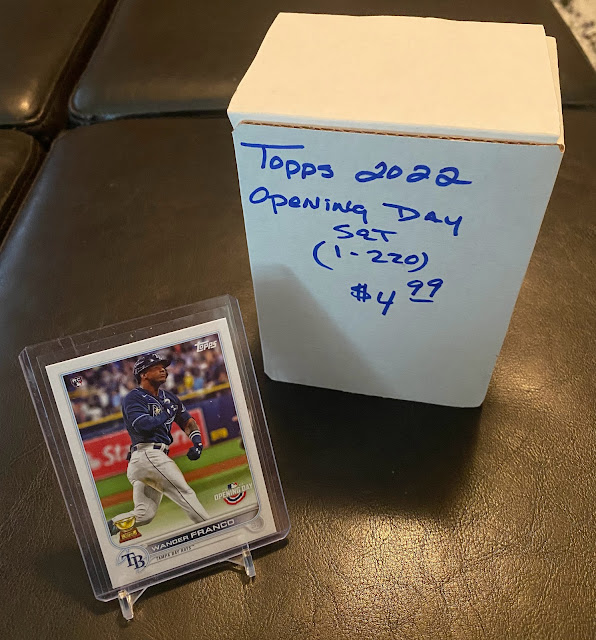 Pretty sure this is my first Wander Franco card. What are your thoughts on Opening Day? Love it, hate it or just don't care?
Posted by Daniel Wilson at 3:00 AM 7 comments:

It's been a few weeks since my last post. While I haven't been posting, I've been buying, trading and organizing at a nice pace. Still not where I want to be as far as organizing goes, but I am making good progress.
Yesterday I had about 30 minutes at a card show. When I arrived some of the dealers had already left. I spent my time looking through some dime and other bargain boxes. I spent $15 and couldn't be happier with my purchases.
Here is a good portion of the 147 cards I took home. 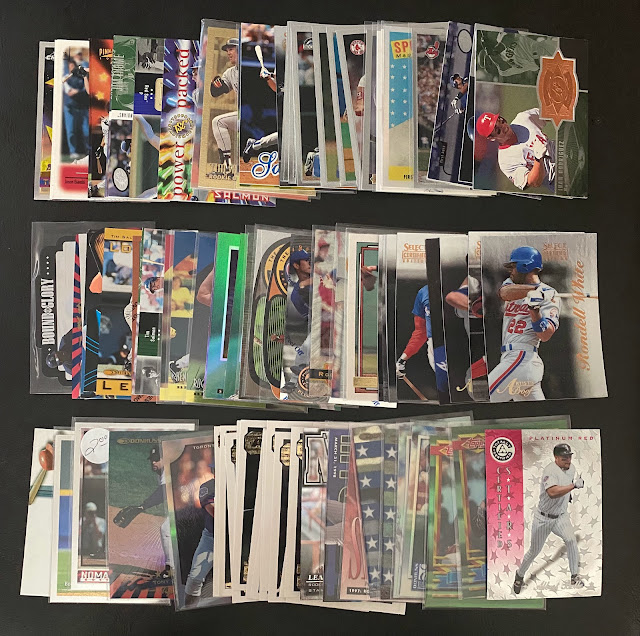 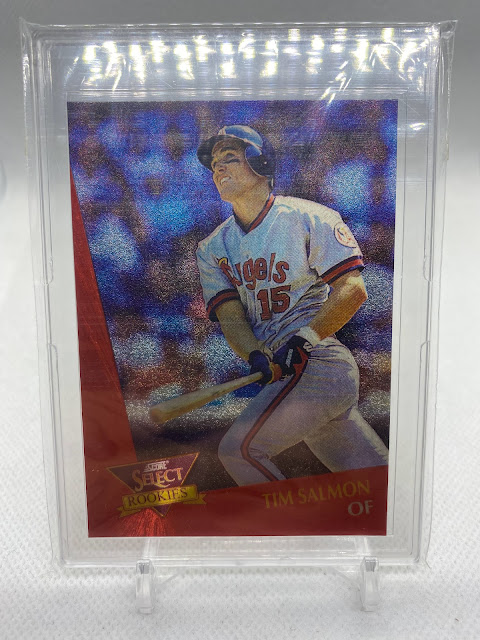 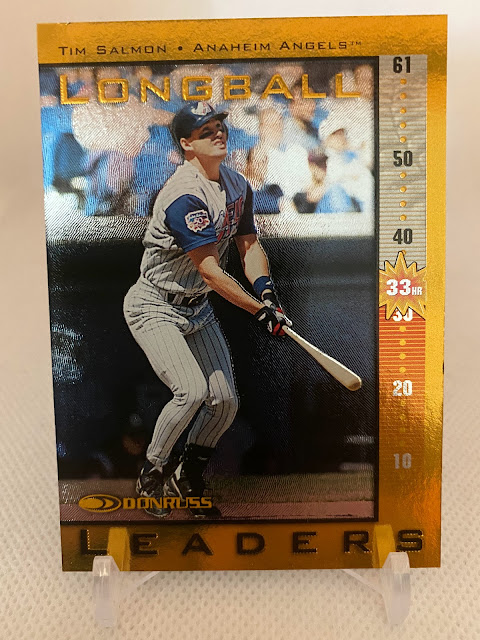 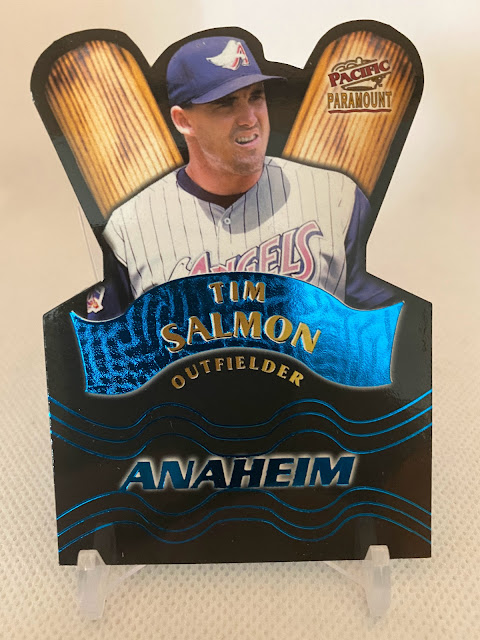 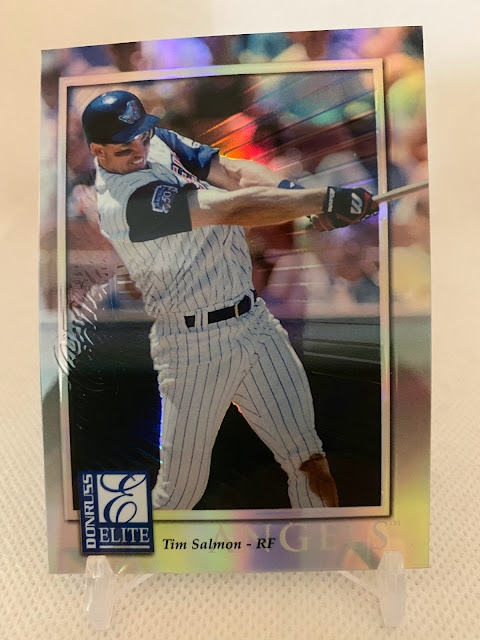 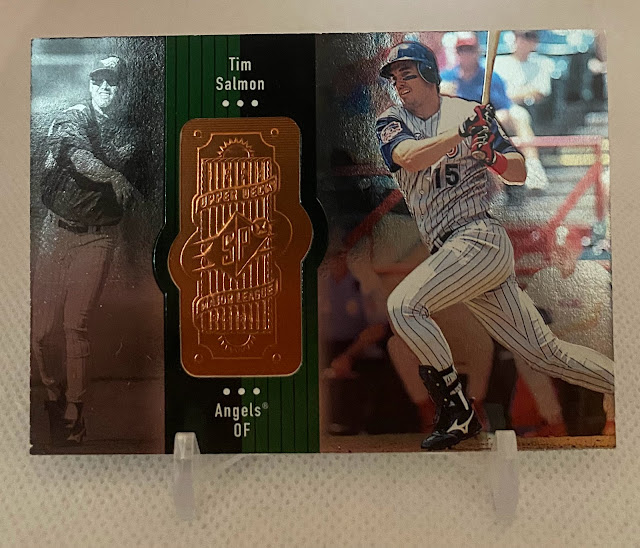 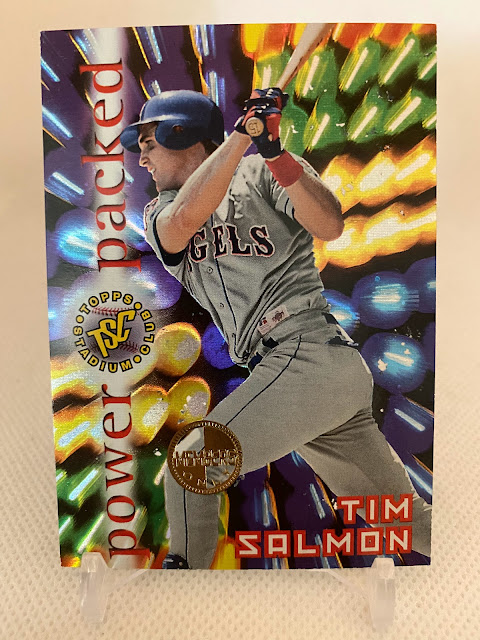 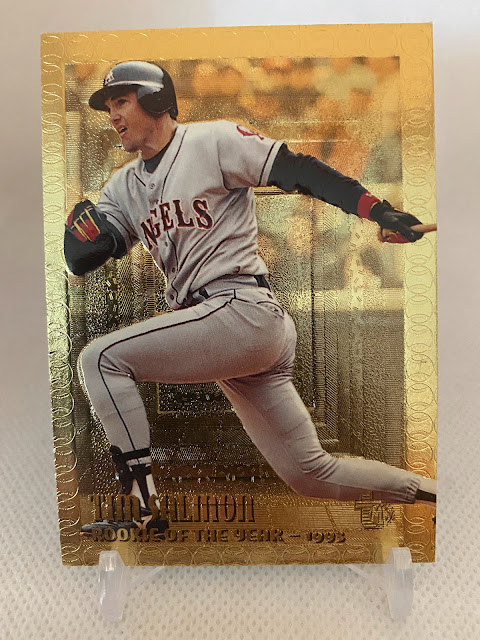 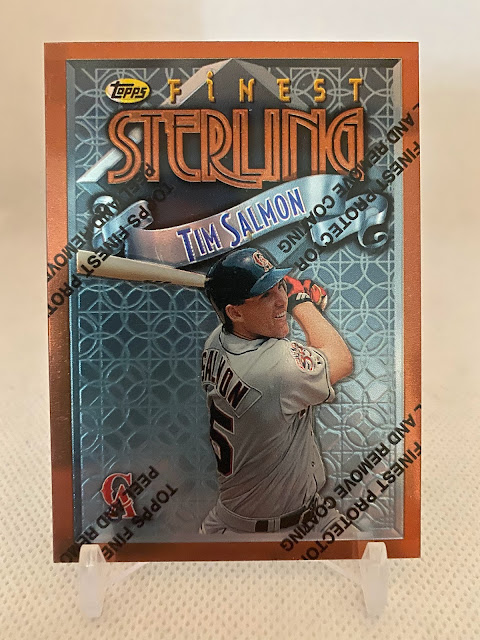 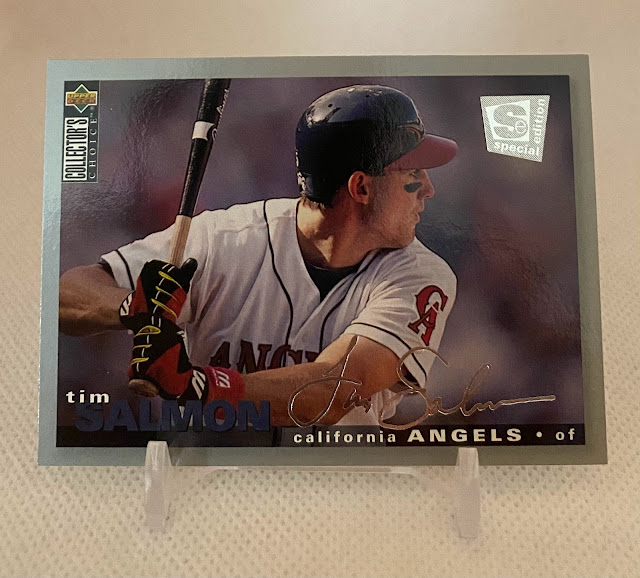 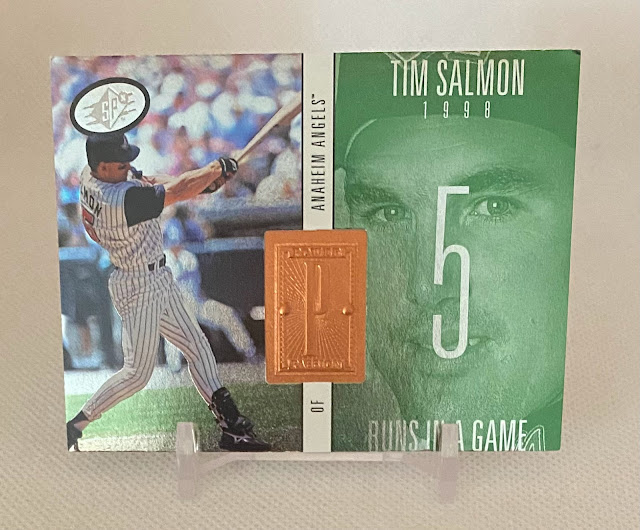 I collect Salmon because we attended the same high school.
Posted by Daniel Wilson at 9:15 AM 4 comments:

I've had fun the past couple of days going through the small Offer Up collection I picked up recently.
There was exactly one card in a top loader and only a handful of cards in penny sleeves in the entire collection. Here is the one card that was in a top loader. 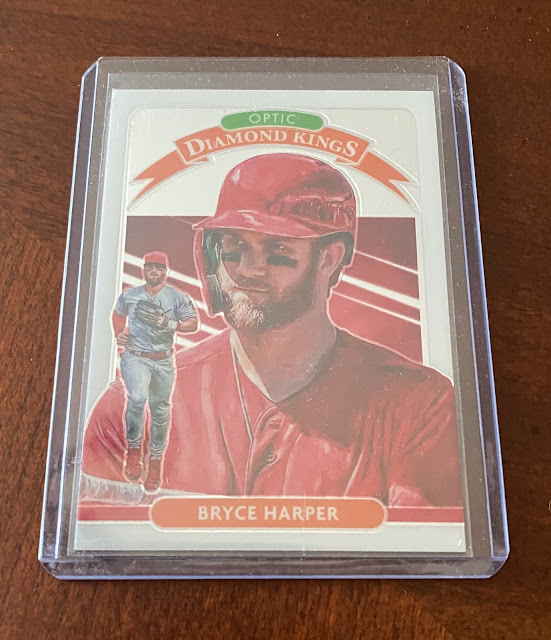 I'm not even sure this card is all that deserving of a top loader, but I do collect Bryce Harper cards, so I removed it from the top loader and penny sleeve and added it to my Bryce Harper binder.
I mentioned that the older football was going to be traded to my Offer Up football/basketball guy. I reached out and already made the trade. Sorry Night Owl and Angus. I don't think there was any big names, but there was a good number of 1979, 1980 and 1981 Topps football as well as another 1000 or so more recent football cards and a few hundred 1993-94 Fleer basketball cards that I traded for these. I know what you are thinking. More junk wax? This is true, but these are a little different and they are complete sets that eventually I will binder and enjoy. They are also sets that I don't already have, so I am happy with the trade.
Here are some other cards from the Offer Up purchase that I have been able to add to my collection from the Offer Up collection purchase this past Saturday.
I was able to add these two cards to my Topps All-Star Rookie Cup binder as the best Rookie Cup card for that year. I have these already as part of the Topps base sets, but these were able to go into my specific Rookie Cup binder. 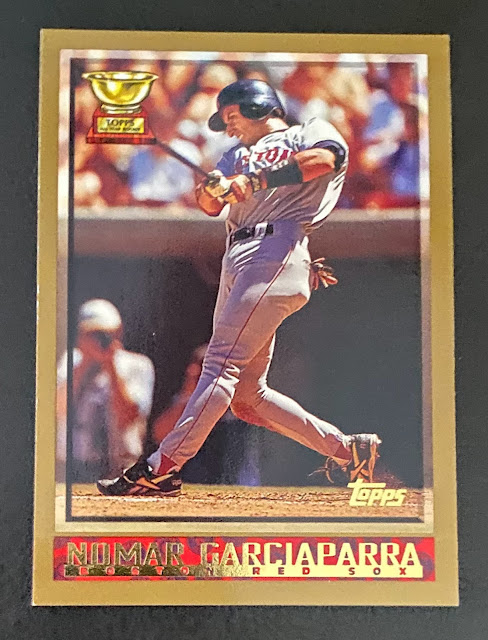 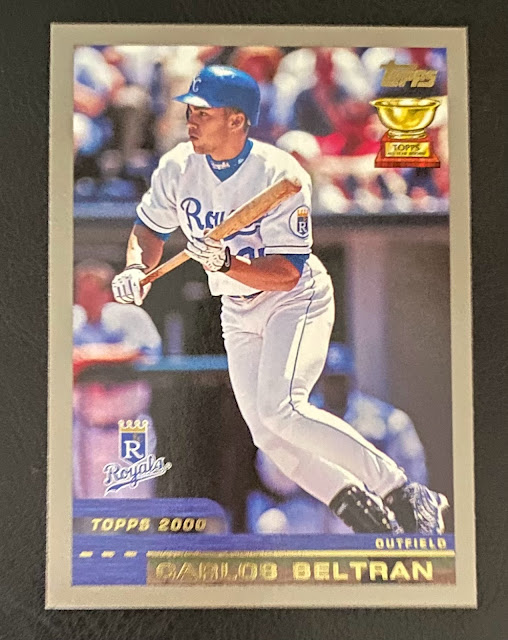 I'm very familiar with Upper Deck MVP cards, but I wasn't familiar with this factory set. I was worried that there might be a card or tow missing, but it is 100% complete. Not only is it the base 2003 MVP set, but it contains an Update Set as well. Always happy to add complete sets to my collection! 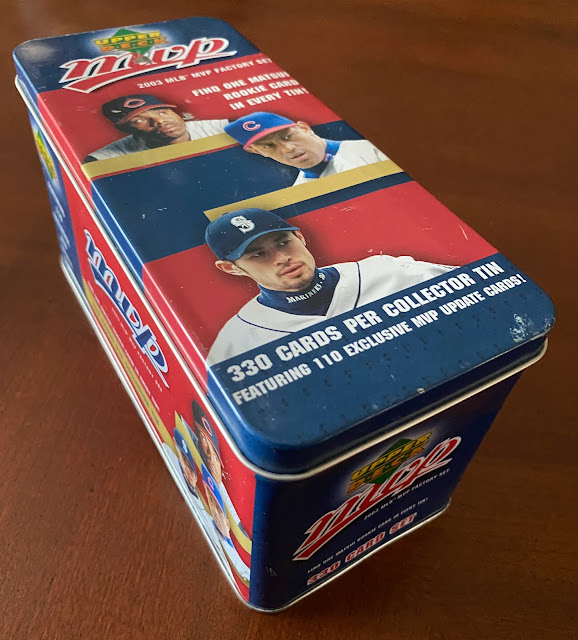 There was a stack of about 75 1984 Donruss cards and I was able to add 6 cards to my set. There were two Diamond Kings and then these 4 that I needed. I'm down to needing just 50 cards to complete this set. 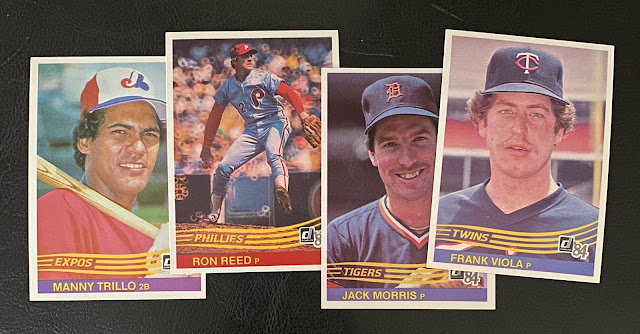 One of the other collections I traded for had a near complete set of 2000 Topps HD cards. It's a small 100 card set. I needed 10 cards. There were a few cards in this collection from this set and I needed 1 of them. 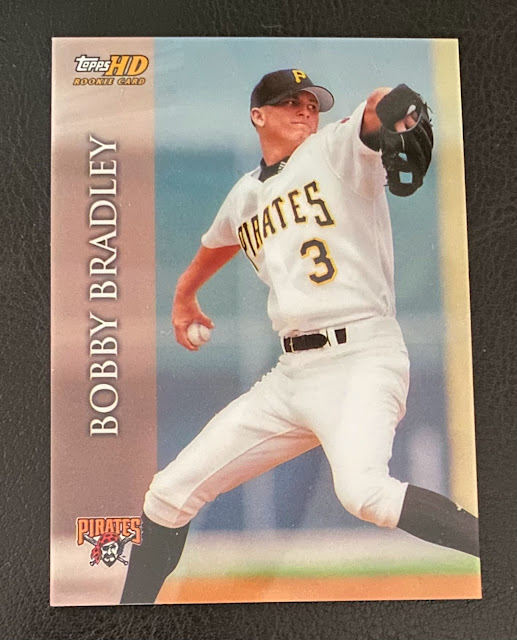 Here are a few other cards that I pulled from the boxes and will be keeping in my collection. 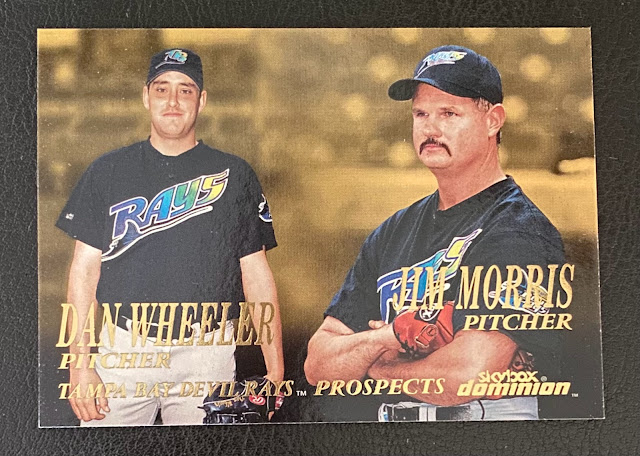 I probably already have this Jim Morris rookie card, but it was still a nice find. This card is usually in the $5 range. 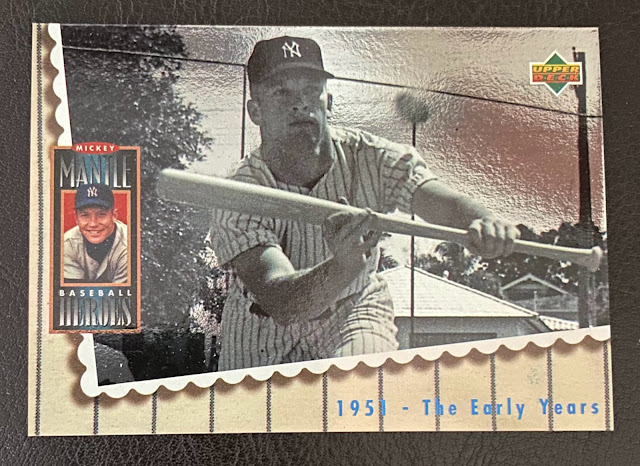 I don't come across the Mantle Baseball Heroes cards very often and when I do they are usually a couple of bucks apiece, so it was nice to find this one.
Next up are these 1989 Holsum discs. This is a 20 card set, so I am now halfway there. The dups were of Wally Joyner and Frank Viola. I collect Wally Joyner, so that dup was put to good use. 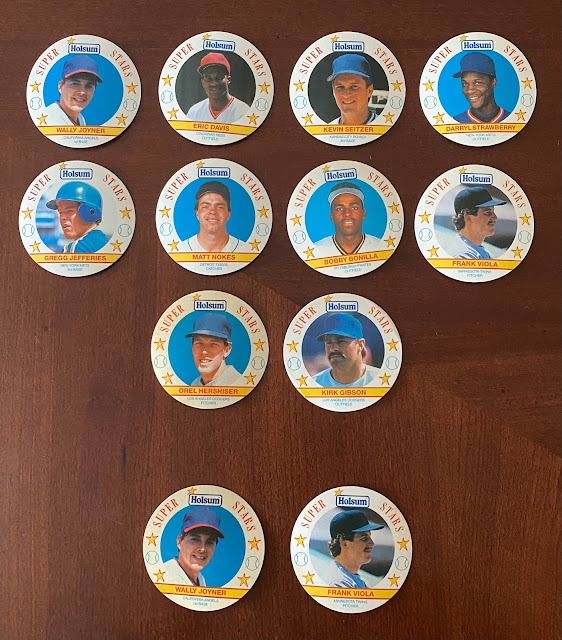 Speaking of dups. Check out these 1989 Fleer insert sets. The funny thing is that I don't think there was actually any 1989 Fleer in the collection. 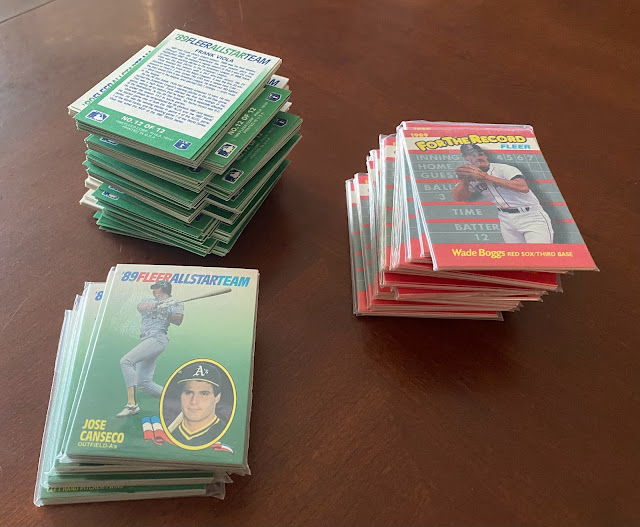 I'll probably have another post or two from this collection, but so far I think it's been worth it.
Posted by Daniel Wilson at 1:21 PM 8 comments: