I enjoy picking up vintage Micky Mantle cards just as much as the next collector, but I don't consider myself a Micky Mantle collector.
Now I don't want anyone thinking I'm out there occasionally buying 52 Topps or 1955 Bowman Mantle cards. Here is a recent example of one of the Mantle cards I picked up recently. Other than a couple of print marks, this 1967 Topps checklist is in fairly good shape, but it's a checklist and so I was able to grab it for just under $10. 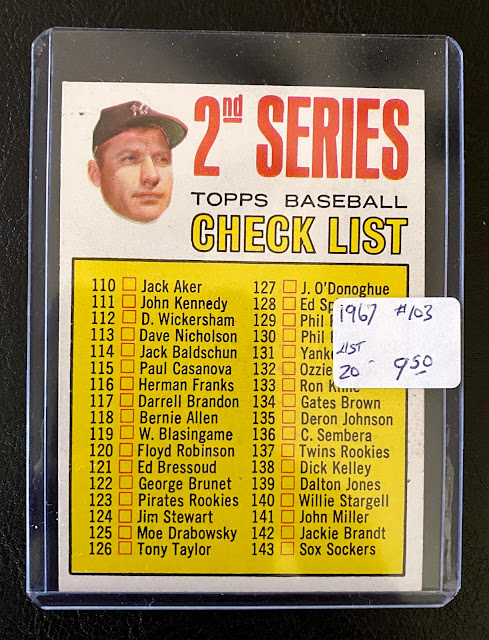 Yesterday I went to the Batter's Box Card Shop and had a chance to buy another card featuring Mantle. This time it was a 1961 Topps card featuring the 1960 American Home Run Leaders. Here is the card. I didn't buy it, so I just grabbed this image from the internet. 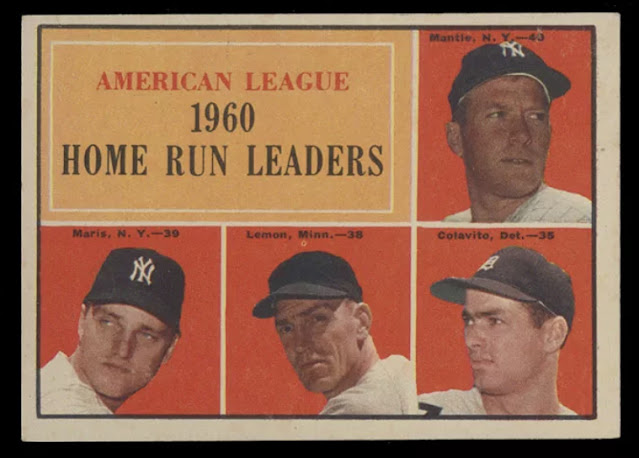 This card was available for $29.95. The condition was similar to the card pictured above. Not perfect, but in decent shape for a card that is 60 years old.
I already told you that I passed on the cards. I did so in favor of a different card. Instead of the American League 1960 Home Run Leaders card featuring Mantle (40), Roger Maris (39), Jim Lemon (38) and Rocky Colavito (35), I opted for the National League version. 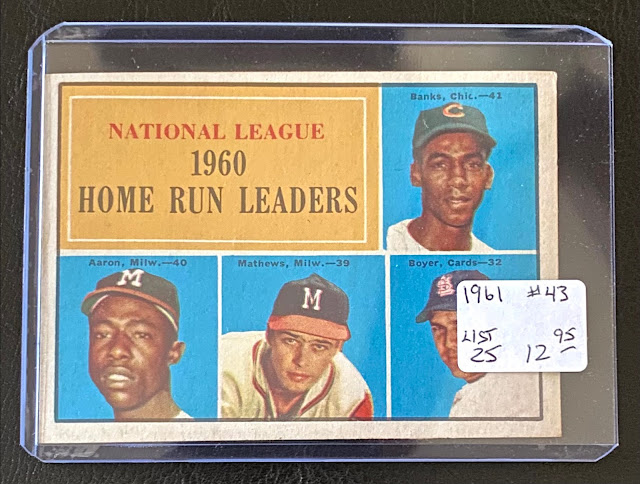 In very similar condition to the American League version, I was able to pick up the National League version for less $12.95; less than half of the copy that features Mantle.
Here is a better look at the card; specifically Ken Boyer, with the price tag removed. Boyer is the only player featured on the card that is not enshrined in the Baseball Hall of Fame, while Mantle is the only player on the American League card that is in the Hall. 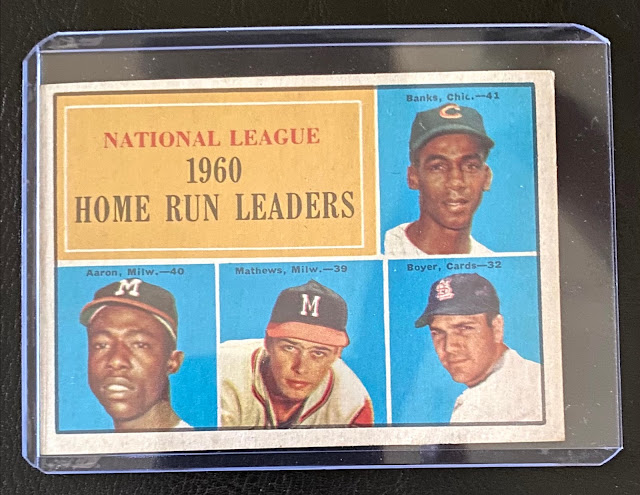 Ernie Banks led the N.L. in 1960 with 41 home runs, followed by Hank Aaron at 40 and his teammate Eddie Mathews with 39. Ken Boyer is the fourth player featured on the front with 32 homers in 1960.
So I picked up the National League version for $17 less than the American League version. Again, the condition of the two cards was about the same. The National League card showcases three Hall of Famers and yet the American League version; featuring just one Hall of Famer, was more than double the cost. Why? Because of Micky Mantle. Because of the New York Yankees.
I don't know if it was always the case, but during my entire lifetime Mantle cards have always carried a premium. What do you think? Is Mantle worth it? I get that his base cards will carry a significant premium over other ballplayers who were just as good or maybe even better. Players like Willie Mays, Roberto Clemente and Hank Aaron.
But seeing these two cards together and seeing the difference in price, just really struck me. I know that Mantle is big name and Roger Maris is also a household name even though he isn't a Hall of Famer, how many of you were even aware of Jim Lemon. Be honest. Rocky Colavito is another familiar name, but not anywhere near the likes of Ernie Banks, Hank Aaron or even Eddie Mathews. Ken Boyer isn't a Hall of Famer, but he certainly could be. Boyer was an 11 time All-Star (7 seasons) and added a 1964 Most Valuable Player award to go with 5 Gold Glove awards.
So what do you think fo the Mantle effect? Is the price of the the American League card justified because of Mantle compared to that of the National League leaders featuring Banks, Aaron and Mathews?
Posted by Daniel Wilson at 2:01 PM 6 comments:

Not everyone is a fan of Topps

Last weekend I was able to go to a couple of card shops and made a few small purchases. I've been looking for this card for a while so when I spotted this for $5 I didn't hesitate.

This 1960 Topps card features Hall of Famer Luis Aparicio stealing second during Game 5 of the 1959 World Series, but featured prominently on the card is Dodgers second baseman Maury Wills. 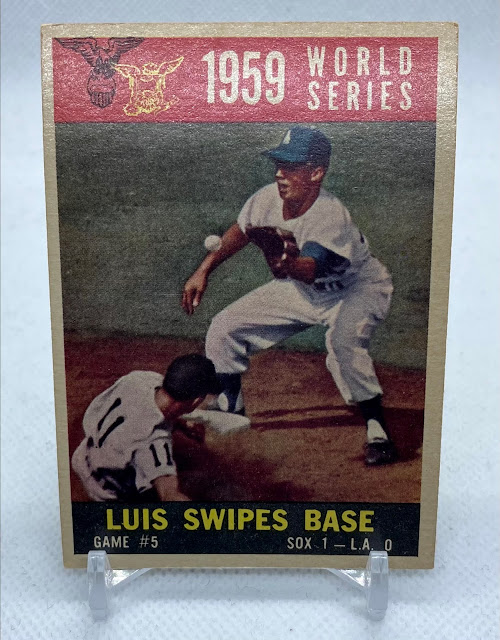 This is significant because Wills was not under contract by Topps and even though he debuted with the Dodgers in 1959 and would steal 104 bases and win the MVP award in 1962, Wills would not have an official Topps card until 1967. He did sign with Fleer and has a rookie card in the 1963 Fleer set.

There have been several players over the years who have not signed a contract with Topps. Madison Bumgarner is the only one I am aware of currently. To my knowledge he hasn't had a Topps card since 2017. Who else? Not just current, but at any point, what players have not had a Topps card produced either because Topps didn't want them or they didn't want to sign with Topps?