I saw a fellow YouTuber get a ttm autograph back from Alan Young a while back and so I got some photos printed off and sent to him.

For those of you not familiar with Alan Young, he is an actor. He is probably most recognized for his role of Wilber on the TV show Mr. Ed, which paired him with Mr. Ed, the talking horse.

I've see Mr. Ed before and it's a good show, but that's not the reason I wanted to write to Mr. young for his autograph. You see, Alan Young is also a voice actor and as such he played the part of Scrooge McDuck in all the Disney cartoons and movies, including Duck Tales.

Duck Tales was probably my favorite cartoon as a kid! Huey, Dewey, and Louie were always getting into trouble, there was plenty of adventure with Launchpad and Gadget around, and there was a constant threat of the Beagle Boys stealing all of Scrooge's money from his money bin.

So I sent him four of the same pictures and asked him to personalize one to me and one to each of my boys who I have introduced to Duck Tales as well. 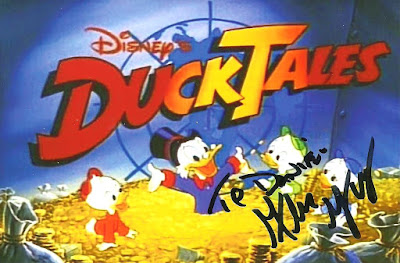 Anyone else out there a fan of Duck Tales? Anyone ever got a voice actors autograph before? If so, who?
Posted by Daniel Wilson at 5:55 AM