I posted about this on Twitter already and made a YouTube video as well, but thought I would post about it here as well because to me it's just too crazy not to.
I got to go to a card show the Saturday before Thanksgiving and I spent most of the time at the show digging through a bunch of dime boxes with one particular dealer, that I frequent every time I go to this particular show. There was another guy going through the boxes at the same time and I found this 1986 Donruss Jose Canseco Rated Rookie card early on and showed it to the other guy who was digging through the boxes and he immediately offered me a buck for it. I politely declined and kept digging. 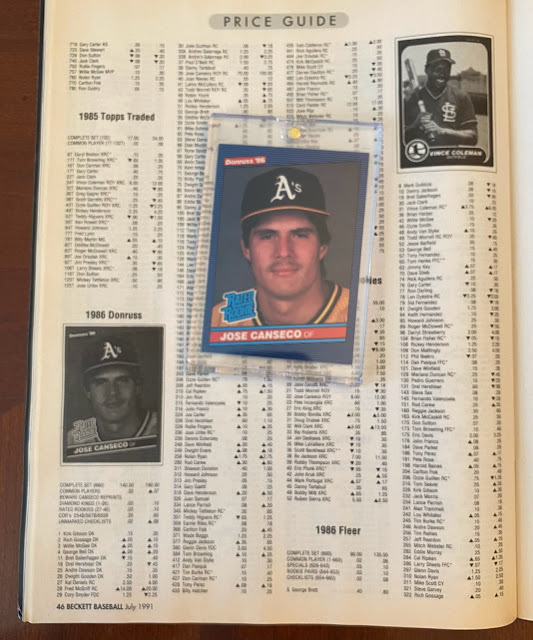 The card was in a penny sleeve. After getting hime I decided it deserved a magnetic. For fun I looked it up in a couple different Beckett magazines. This particular magazine is from July 1991. Check out the price $100. I have never owned this card before so I was super happy to find it and even more so to be able to add it t my collection for just a dime.
I purchased 411 cards from the dime boxes. The dealer asked for $40 for the stack, which I gladly handed over.
In addition to the 86 Donruss Canseco, I grabbed a bunch of Hall of Fame rookie cards that I just couldn't pass up for a dime. Guys like Randy Johnson, Jeff Bagwell and Larry Walker. Obviously Canseco isn't in the Hall of Fame. neither is this guy. 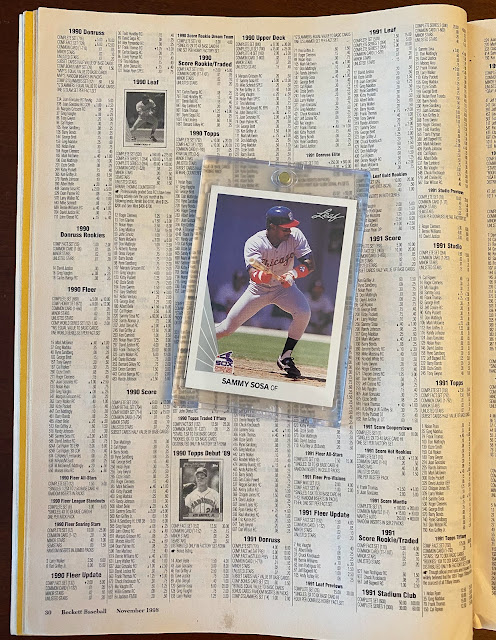 This 1990 Leaf Sammy Sosa cost me a dime. Check out the price listed in this November 1998 Beckett. $120. Crazy! I know I talked out this briefly in a previous post about the 1990 Leaf Frank Thomas card. I actually have a couple of copies of this card already, but this dime box snag will hold a special place in my heart.
I've gotten some great cards over the years in dime boxes, but these two cards probably have the highest peak price out of any cards that I've ever pulled from a dime box. What's the best card you've ever gotten from a dime box?
Posted by Daniel Wilson at 3:00 AM