Schuyler over at Schuyler's Stuff had a contest a week or so ago and I was one of the winners.  He sent me a nice package of cards as my prize. He included some D-Backs, 2011 Topps and Bowman, and a pack of 1992 Leaf. Here are some of the highlights. Thanks Schuyler!


First up, some of the D-Backs: Montero, Finley, and Konrad Scmidt RC.

Lastly, the highlights of the 1992 Leaf pack: Hall of Famers Alomar and Molitor. 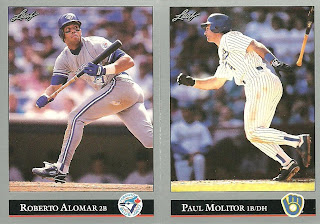 Posted by Daniel Wilson at 5:55 AM