Starting A Collection For My Kids

I mentioned in a post last week that I am trying to see if my boys have any interest in baseball cards. I tool them with me to the card shop and told them they could each have $2 to pick out a card. My oldest is 5 and a half and my middle boy is almost 4. I flipped through the cards in the $2 relic/auto box and my oldest son picked out this 2000 Fleer Showcase Sweet Sigs JOSE CRUZ JR. Auto. 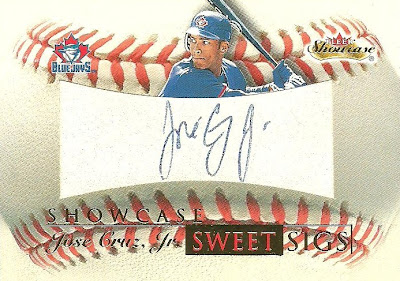 My other son, kept picking out cards in the showcases that he liked and I had to keep explaining that he only had $2 to spend and that most of the cards he was looking at were way more than $2. Finally he saw some 2007 UD Masterpieces Jersey Cards that he liked. There were several that were $2 (Jason Bay,etc.), but I helped him pick this Craig Biggio Captured on Canvas Jersey card, which was $3 so that he would have a future Hall of Famer relic card for his collection. 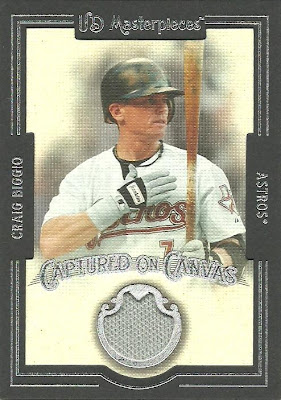 I bought them magnetic cases (which cost almost as much as the cards) for their cards so they can keep them nice and display them. They seem somewhat interested in cards and I'm going to see if I can pick up a few quality cards for them for Christmas to try and help build them a nice collection.
Posted by Daniel Wilson at 12:44 PM