Yesterday I mentioned the 1956 Topps Herb Score rookie card that P-Town Tom sent me. Here it is, in all it's glory.
Herbert Jude Score made his major league debut in 1955 on the Cleveland Indians at the age of 21. He would go 16-10 with an ERA of 2.85, setting the major league rookie record for strikeouts with 245 k's. His record would stand until Dwight Gooden broke it in 1984. Herb was rewarded with Rookie of the Year honors for his 1955 campaign and was selected to represent the American League in the All-Star game.
So how do you follow up on that? 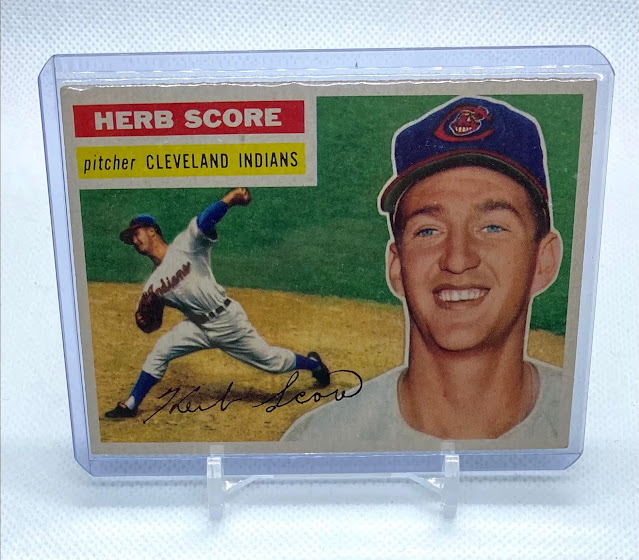 Let's take a look at the back of the card, and specifically the cartoons. We learn about Score setting the record for strikeouts by a rookie. We also learn that he was a Bonus Baby, receiving a $60,000 bonus from Cleveland in 1952. The last section of the panel is inaccurate and tragic at the same time. 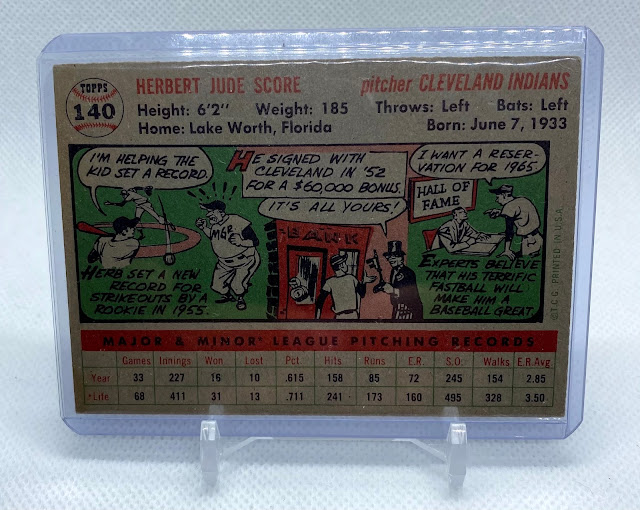 The depiction is of Score asking the Hall of Fame for a "reservation for 1965". With Score debuting in 1955, he would need at least 10 years of MLB service to be eligible for the Hall of Fame. An election though would need to occur 5 years after retirement, so that would put the date at 1970 at the earliest.
The tragic part is that Score would not be elected to the Hall of Fame. He wouldn't even accumulate the 10 years in the big leagues to be considered. So what happened?
Score followed up his rookie season by winning 20 games and lowering his ERA 253 strikeouts. He was an All-Star for the second straight season. He was on his way to becoming one of the most dominating pitchers of his generation. But on May 7, 1957 Score would take a line drive off his face. He would miss the remained of the 1957 season. When he returned to the mound in 1958 he tore a tendon in his arm just after just a few starts and he was never the same. Between 1958 and 1962 he would only start 57 games, being traded to the White Sox in 1960. He would start 65 games between 1955-56. What a shame.
I became interested in Score when I pulled his autograph from a pack of 2000 Fleer Greats of the Game. I had never heard of him at that time. I did some research and have never forgotten him since. Every so often I come across something that sparks my interest again.
A few months ago I grabbed a 1960 Topps Score card from the 50 box at my LCS and it prompted me to start looking for his rookie card again and I put it on the top of my Most Wanted list. I've been looking at various copies on eBay on and off since then. I struggled finding one that was in acceptable condition for an acceptable price. I had actually put in a best offer or two, but hadn't been successful.
Speaking of condition, I don't expect or even want perfection necessarily when it comes to vintage. I don't mind soft or even rounded corners and creases to me add character. My main concern is centering and even that doesn't need to be 50/50 for me to be happy. The condition of this particular card is phenomenal! The centering and even the corners are fantastic. Thank you so much Tom!
Injury, illness, military service have cut careers short and altered the history of baseball. I truly think Herb Score would have ended up in the Hall of Fame if he had not been struck in the face and missed so much time, which may have resulted in him injuring his arm. Who sticks out to you?
Posted by Daniel Wilson at 3:00 AM