I was watching a show recently on the MLB network where they provided a list of the top player at each position from the 1990's. Here's the list.

During the 1990's is when I really started following baseball and collecting cards, so I remmber all of these player extremly well. After watching the show I decided that I wanted to get each players key Rookie Card and figure out a cool way to display them all. I already had the Upper Deck Griffey and the Bowman Piazza, but I need everyone else, so I put together a list and will start to chip away at it. My first acquisition was this 1988 Topps Traded Olympic XRC of Robin Ventura. I got it off eBay for $0.99 shipped. 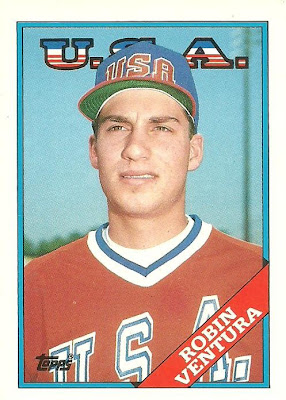 Posted by Daniel Wilson at 8:10 AM