Well, I finally got a good picture of the Mark Reynolds autographed baseball. While waiting in line someone mentioned that they weren't sure if Mark would sign the sweet spot because these were free autographs. When I got closer, I saw a guy hand Mark a ball and Mark signed it on one of the side panels. So when I got up there I asked if he would sign the sweet spot and he said he would. Then he started looking around for a pen - all he had was Sharpies. The guy in line behind me gave a pen to Mark and said he could use it, but it was a black pen, so I said, "Is that blue?" Mark looked at it and said "No, it's black." Then A.J. Hinch leaned over and handed Mark a blue pen and he signed my ball. So, it wasn't without a little drama, but I ended up with a Mark Renolds autograph on the sweet spot in blue ballpoint pen. Thanks Mark! 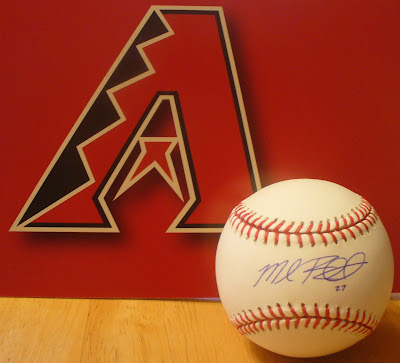 Posted by Daniel Wilson at 6:50 AM