Every player and every card has a story: 1956 Topps Bill Sarni

A few weeks back I came across this 1956 Topps card of Bill Sarni. @andyt813 posted his 1956 Topps Cardinals set and @TheVineCard asked if this card featured Jackie Robinson as the opposing player in the play at the plate. 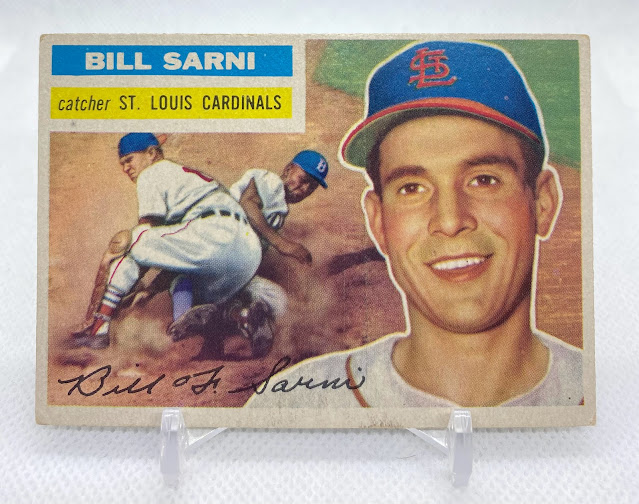 @TheVineCard followed up with another tweet that included this clip from Baseball Reference which indicated a potential play at the plate on August 29, 1955 in a game between the Brooklyn Dodgers and the St. Louis Cardinals at Ebbets Field in which Jackie Robinson stole home. The Dodgers would win the game 10-4 and go on to compile a 98-55-1 record winning the National League title and defeating the New York Yankees in the World Series 4 games to 3 that year.
Is the picture on this 1956 Topps card from that game on August 29, 1955 where Jackie stole home? It could be. Not sure that we will ever be certain, but the evidence was good enough for me that I promptly went to eBay and snagged this card under $5 bucks shipped. The idea of owning a 1956 Topps card featuring Jackie Robinson for that price was just too tempting. *Night Owl confirmed that this is not, in fact, a picture of Jackie Robinson, but it is Junior Gilliam. Still a great card though! 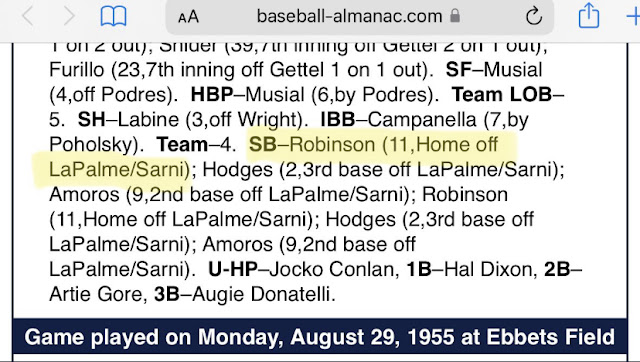 The card is that of William F. Sarni, who went by Bill as indicated on the front of the card. The F stands for Florine. Bill was born on September 19, 1927 in Manhattan Beach, California which is an affluent beach city in Los Angeles County. Wikipedia lists the following as being from or having lived in Manhattan Beach: Colin Cowheard, Matthew Fox, Vince Vaughn, Owen Wilson, Jeanie Buss, Mike D'Antoni, Blake Griffen, Steve Nash, Luke Walton, Tony Gonzalez, Matt Leinhart, Nomar Garciapara, and Don Mattingly among others. 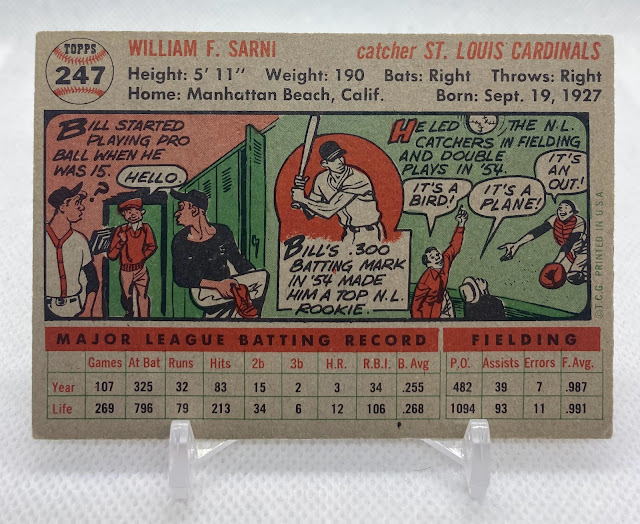 Look at the fantastic cartoons on the back. I can't remember where I heard this recently, but it was mentioned that Topps employed multiple comic book artists back in 1950's, 60's and 70's, which is why the cartoons from those early years are so great and have a real comic book feel to them.
The first cartoon highlights the fact that Bill started playing professionally at the age of 15. Being from the Los Angeles area, Bill played for the Los Angeles Angels in the Pacific Coast League in 1943 several months before turning 16. In 33 games for the Angels Sarni went 19-for-83 for a .229 average with a home run and 9 RBI. Not great numbers, but not terrible, especially when you remember that he was only 15 years old! I have to think that him getting this opportunity may have had something to do with depleted rosters due to World War II, but it's still impressive.
The next section of the cartoon mentions Bill's .300 batting average and fielding prowess in his rookie year. Bill would make his Major League debut on May 11, 1951, but didn't manage to stay in the big leagues until 1954. His .300 batting average in 1954 would come over 123. He hit 9 home runs and had 70 runs batted in at the plate, but also proved his worth behind the plate as well. His .996 fielding average led all N.L. catchers that year.  Wikipedia notes that on July 18, 1954 both Sarni and Philadelphia Phillies catcher Stan Lopata both played a game behind the plate without chest protectors because of the extreme heat in St. Louis. Some additional research reveals that it reached 115 degrees that day, the all-time record for St. Louis, that still stands today. It was so hot that it caused streets in St. Louis to literally burst. 20 people died that day in St. Louis due to the heat. 104 people lost there lives during the heat wave in St. Louis that week. 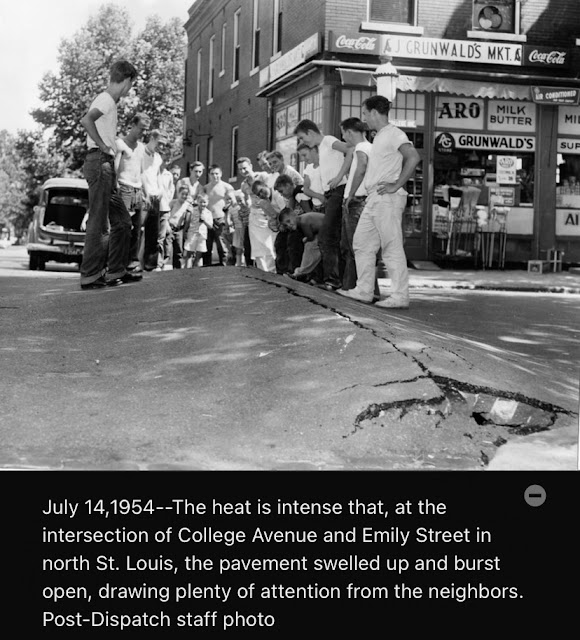 I live in the Phoenix area and it gets hot here. 115 is a common occurrence, but it's not 1954 and we are equipped to deal with it. St. Louis in 1954 was not. A Facebook memory from last year came up just a couple days ago that reminded me of my youngest playing in a baseball game when it was 118 degrees outside. It was hot. Can't imagine catchers not using a chest protector though! 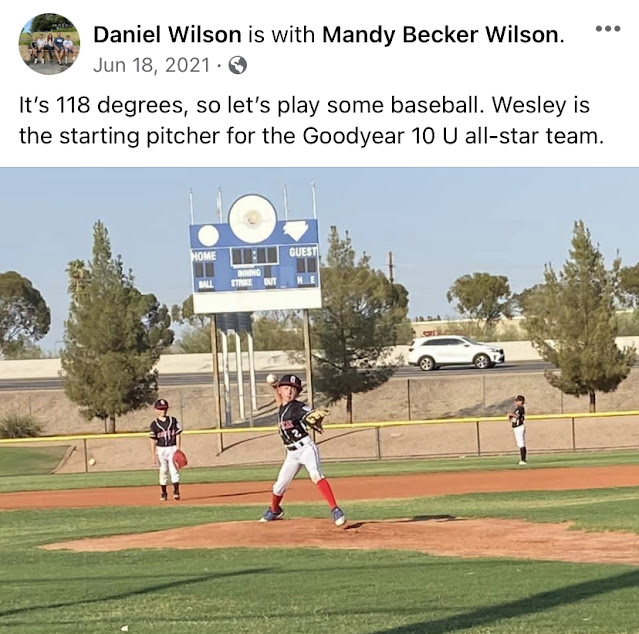 Alright, hope you enjoyed this long post about this awesome 1956 Topps Jackie Rob...I mean, Bill Sarni card. I enjoy these types of posts. Every player and every card has a story.
Posted by Daniel Wilson at 8:17 AM