I see what you did there Topps.

Because of the contest I am currently running, Sparky Lyle is on my mind, so when I saw this 1974 Topps Sparky Lyle card in a dime box last Saturday, I grabbed it. 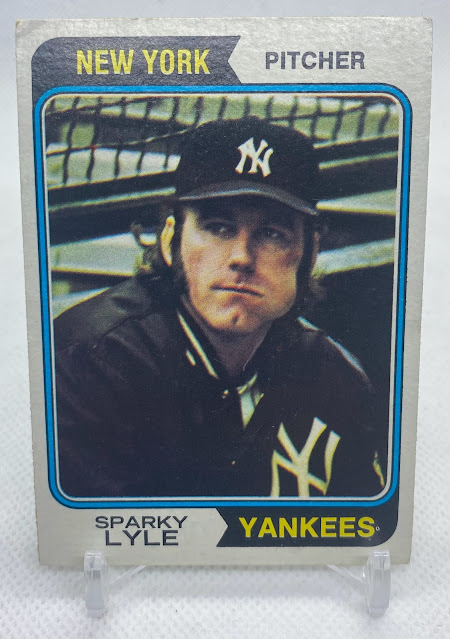 It's a great card of the reliever. Check out the classic NY logo on both the cap and jacket. This card was prior to the Yankees implementing their appearance policy. While Lyle doesn't have a beard, his sideburns are monstrous and it looks like the back of his hair definitely would touch his collar. You can also see what appears to be a huge wad of tobacco logged in Sparky's cheek.
Speaking of cheeks. Let's take a look at the back of the card. We get Sparky's full name on the back of the card next to his facsimile signature. We also see the same fact about his 31 strikeouts in a 17 inning game, which was part of the cartoon on the back of his 1969 Topps rookie card. Two additional facts about his 1972 season including his 35 saves which set an American League record at the time. This is significant because Saves were not a stat that actually appeared on the stats portion of the card at the time.
We also have a cartoon on the back of the card. This one says "Sparky enjoys birthday cakes." and features a player blowing out candles on a birthday cake. Well if you have read Sparky's book, The Bronx Zoo, you will know that Sparky enjoyed sitting naked on top of his teammates birthday cakes. The book didn't come out until 1979, but obviously when a player leaves the imprint of his butt cheeks on multiple birthday cakes, that story is going to make its way out of the clubhouse. 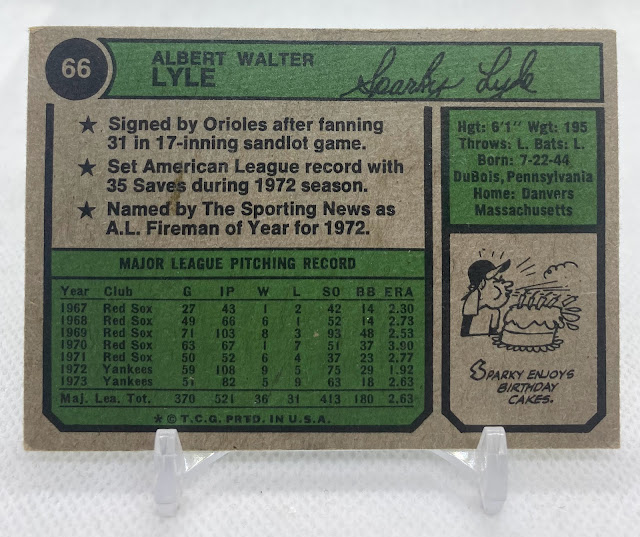 Topps obviously wasn't going to include the caption "Sparky enjoys sitting naked on birthday cakes.", but I do think it was pretty clever of them to include this factoid about Sparky on the back of a baseball card.
Can you think of any other comics on the back of a baseball card that might be more than meets the eye, similar to this 1974 Topps Sparky Lyle card?
Posted by Daniel Wilson at 3:30 AM