The kindness of a fellow collector lands me my first Red Man card!

Fist, I've added a card to the prize for my Sparky Lyle contest, so click here to leave another comment and get another entry. I've mentioned before that one of the card shops I frequent; The Batter's Box, holds weekly in-person auctions. They used to hold two on Saturday and one on Wednesday, but because of Covid they scaled back to just on on Saturday along with the one on Wednesday nights. Two Saturdays ago I went to the auction and bid on a few things, but didn't win anything.
One of the items I bid on was a four card page of oversized cards. The one card I really wanted was a 1953 Red Man tobacco card of Hoyt Wilhelm. As I mentioned I didn't win the item, but it was one of the last items up for auction, so after the auction ended, the winner of the item asked me what I wanted and I told her the I wanted the Wilhelm. She said, you can have it. She wanted one of the other cards; a 1970 Topps Super Willie Stargell. I asked her for a price and she said, "You can just have it." That was super nice of her!
I've long been aware of the Red Man cards, but this is my first time owning one. I know it doesn't have the tab on the bottom. I'm okay with that. 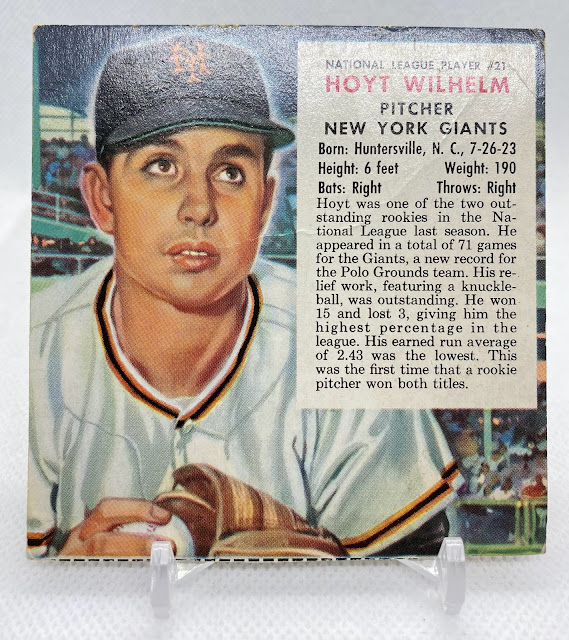 Obviously I knew that Wilhelm had a great career. He's in the Hall of Fame, but I didn't realize that he had such a great rookie year, as discussed on the card. I also didn't realize that Hoyt turned 30 years old during his rookie season. How crazy is that! Also didn't realize until doing a little research for this post that he fought in Europe during World War II; including in the Battle of the Bulge and was wounded; earning him a Purple Heart.
Here's the card back. I hope the kid that had this card originally got their baseball cap! 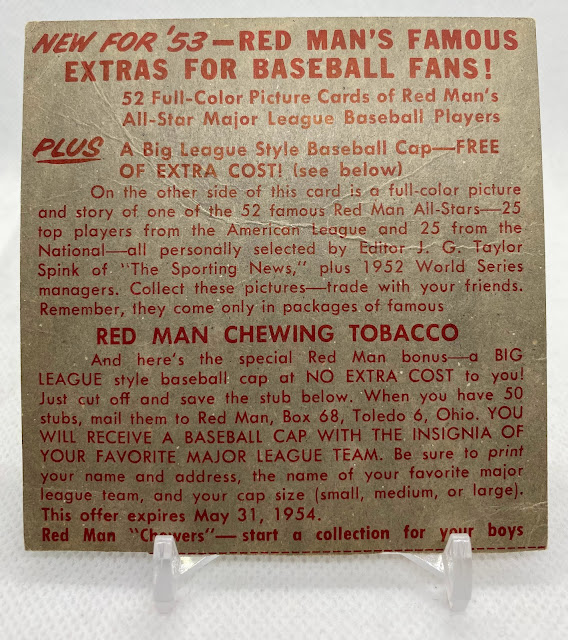 Do you have any Red Man cards in your collection?
Posted by Daniel Wilson at 7:17 AM