Getting really great participation for my ongoing contest. It runs through Sparky Lyle's birthday; 7/22, so plenty more time to get entries in. I've added a few more cards to the prize package, so be sure to click here to see the new cards and get an entry in.
I went to a card show a few ago and my goal going into the show was to purchase one of the 4 remaining Hank Aaron cards I need for my Topps playing career run. I was able to do that.
I also picked up a couple of random cards at the show. These are players that I don't actively collect and sets that I'm not going after. But I still bought them. I bought them because I liked the card and I felt the price was right. Let me know what you think.
First up is this 2000 Upper Deck Game Jersey card of Troy Glaus. It came in the screw down. I don't still just have these laying around. 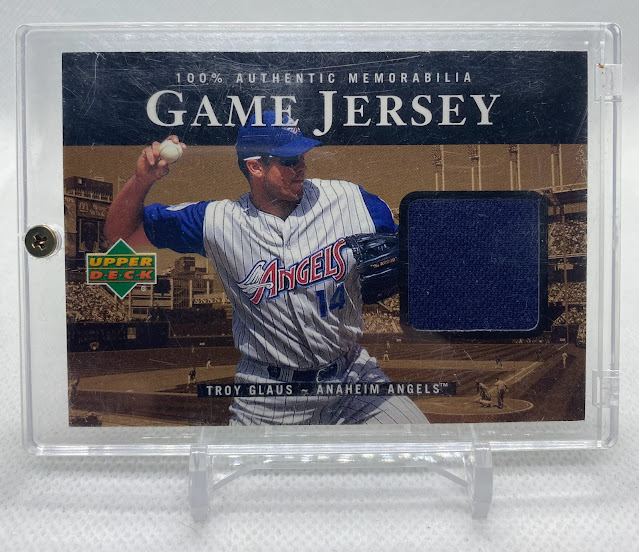 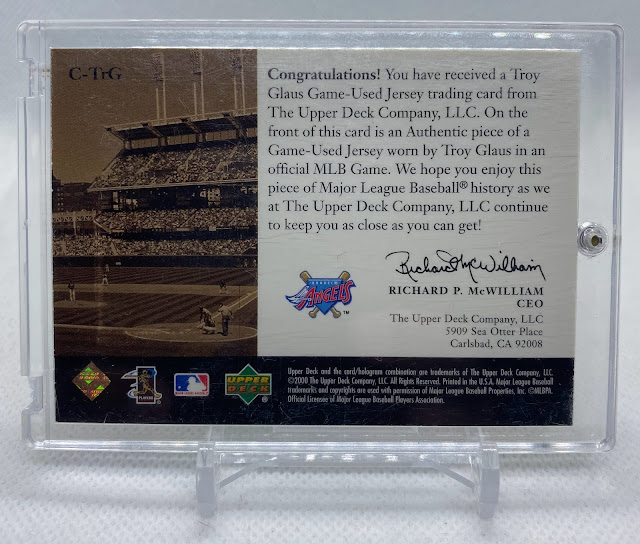 This is from back when jersey and other relic cards were fairly new and they were tough to pull from packs. The Troy Glaus card was available in both Series 1 and Series 2. For Series 1 it was available in Hobby products at a rate of 1:288 packs. This card could also be pulled from Series 2 packs of either Hobby or Retail with odds at 1:287 packs. There are 19 different players that have a Game Jersey card in Series 2, so assuming they all have the same amount of cards, that puts the odds of any one player at 1:5,453 packs.
I have no idea how to determine what Series this particular card came from. Looking at the October 2000 Beckett, it lists both versions of the card with the Series 1 card booking at a high of $60 and the Series 2 card booking at $50.
I paid $2 for this card. Again, I like the card for a couple of reasons. I had an Angles hat from around this time period that had the wing on the A. Not sure where I got it from, but I liked it. Glaus was a good player who was pretty much at his peak when this card was issued, He was an All-Star in 2000, 2001, 2003, and 2005), won the Silver Slugger award in 2000 and 2001 and led the AL in homers in 2000. In 2002 he would lead the Angels to a World Series victory and was name World Series MVP.
The other random card I grabbed at the card show was from the same dealer. It is a 2003 UD Play Ball Game Used Memorabilia Signature card of Lance Berkman. It's numbered 01/50. You can see the yellowed edges of the top loader. It's probably been in there a while. This card was in a half price bin, so instead of $20, I paid $10 for it. 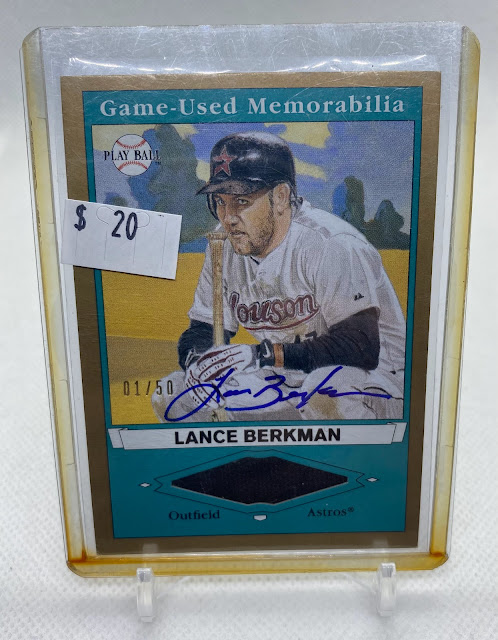 Berkman is not a player I actively collect, but he had a nice career. The bulk of his career was spent with the Astros and was a part of the Killer B's along with Hall of Famers Jeff Bagwell and Craig Biggio. Berkman, a 6 time all-star would appear on the Hall of Fame ballot for the first and only time in 2019 as he would garner just 1.2% of the vote and fall off the ballot. Do I think he belongs in the Hall of Fame? No, but it does seem like he should have gotten more consideration. Take a look at his career accolades.
The switch hitting Berkman hit 366 home runs had 1,234 RBI and batted .293 over his career that spanned from 1999 - 2013. He finished in the top 7 in NL MVP voting 6 times. That tells you how good of a player he was during his prime. He had injuries that hurt him as he got older and cut his career 95 hits short of 200 and 34 home runs shy of 400, which would have certainly helped his HOF cause.
But let's take a look at how he ranked among hitters during the time in which he played; specifically the decade of the 2000's.

Those are pretty impressive numbers and rankings for that decade. Again, I don't think he is a Hall of Famer, but he had a great career. 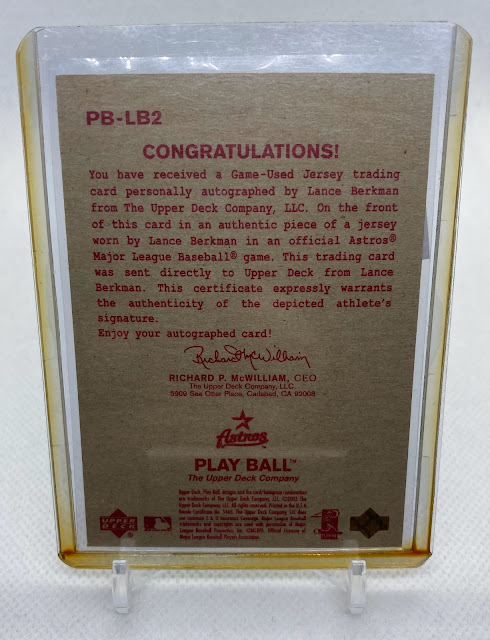 So why did I buy the card. It's a relatively early game-used card with an autograph (a great looking autograph, if you ask me) and is numbered to just 50. It's numbered 01/50 at that. I realize that has no real significance, but I still think it's cool that it is number 01/50.
Alright, so do you ever buy random cards, just because? Did any of you ever pull cards like this back in 2000 - 2003 time period? Should Lance Berkman be in the Hall of Fame?
Posted by Daniel Wilson at 9:18 AM