I used an eBay gift card that my wife had gotten me for Christmas to purchase my first 3000 Hit Club Bat Card since deciding to take on the challenge of collecting a bat card of every member of the 3000 Hit Club. I spent a little more on this particular card because it is actualy from Upper Deck's Piece of History 3000 Hit Club set and those cards usually command a premium over other bat cards of a particular player. This card is of Hall of Famer PAUL WANER. This might be a name that most of you don't recognize. Paul spent the majority of his 20 major league seasons (1926 - 1945) with the Pittsburgh Pirates, but also spent time with the Dodgers, Braves, and Yankees. He had a career batting average of .333 and was the 1927 NL MVP. 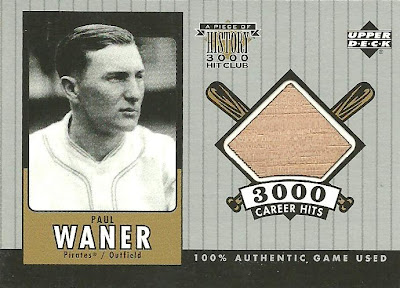 Posted by Daniel Wilson at 6:14 PM