I got a $25 eBay gift card from my brother-in-law for Christmas and made quick use of it. I ended up getting 5 cards with it.

Here are two that I picked up from the same seller using the "Make an Offer" feature. The top one is the regular version that is numbered to 525. The bottom one is the a Red-Blue Stitch Red Ink parallel version numbered to 299. The seller had a $7.99 price tag on the top one and $12.99 price tag on the bottom one, so I offered $5.00 and $10 respectively. He accepted the $10 offer right away, but counter offered with $7.25 for the top one. Wow, a 74 cent reduction! I counter offered with $6.50 and he accepted. He combined shipping costs, which I really wasn't expecting because his listings didn't mention it and I didn't ask about it because shipping was only $1.75 per card, so that was nice. For both cards shipped it was $2.25. So I spent $18.75 total on both cards. Drew is a solid player and I hope he can bounce back this season after breaking his leg last year. I was at the game when he broke it and it was nasty! These are my first Stephen Drew auto's so I am also excited about that. 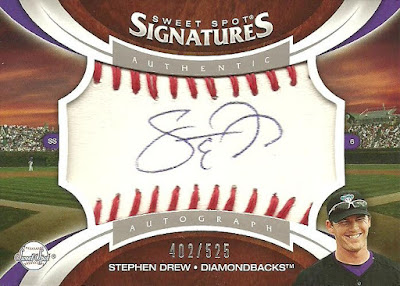 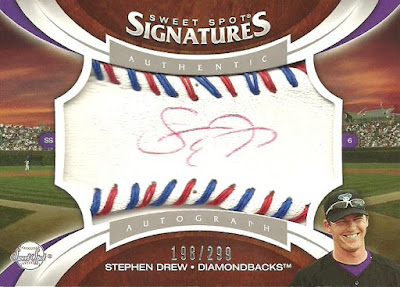 Posted by Daniel Wilson at 3:00 PM