I picked up a trifecta without even realizing it!

Yesterday I stopped at my local card shop, AZ Sports Cards. The owner had recently bought a collection and had some nice vintage stuff at good prices. He also had a dealer that he had not heard from in over a year, so he decided to liquidate his stuff, with lots of rookie cards, jersey, and auto's for a buck each. There was another case that had just reduced their prices as well, so I took advantage of the current situation and picked up three cards. I didn't realize until this morning that I had picked up an auto,a relic, and a rookie card: a trifecta. The trifecta though is not of the same player. I'll start by showing the auto. It's a 2008 UD Goudey Kelly Johnson Goudy Graphs Auto. Kelly spent the 2010 season and most of last season with the D-Backs before being traded to Toronto. I'd really like an auto lic of Johnson as a D-Back but I'm not sure if one exists. He does have a few D-Backs jersey carrds from this years Triple Threads and Marquee though, so if anyone out there has a Kelly Johnson D-Backs auto or jersey cards and wants to trade for this one of him in a Braves uniform, let me know. I'll show you the relic (3000 Hit Club Bat Card) and the rookie card (HOF) that I picked up over the next couple of days. 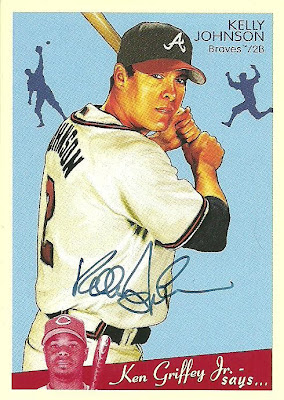 Posted by Daniel Wilson at 7:42 AM