I picked up this 2002 Flair Power Tools JEFF BAGWELL/CRAIG BIGGIO dual bat card at a card shop last weekend. Bagwell didn't make the cut for the Hall of Fame this year, but it's looking like he will get in in the near future. Biggio is a member of the 3000 Hit Club so he should get in as well. His first year of eligibility is next year, so it's possible that both Bagwell and Biggio will both be elected to the Hall of Fame next year. For just $2 it was impossible to pass on this card.

Because this bat card features two players, I don't really consider it as a card for my 3000 Hit Club Bat Card Collection. I'll have to pick up a bat card of just Biggio. 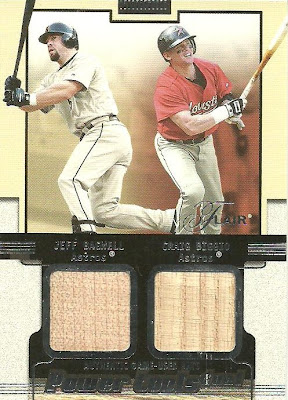 Posted by Daniel Wilson at 7:53 AM