I find myself typically just showing cards on my blog. I mean there is only so much one can write about a particular card or set. I want to share more experiences. I think that might be why I find myself wanting to be more active on YouTube.
I'm going to try to do something similar here on my blog. Yesterday I shared a card show experience. Today it will be what I will call a Card Shop Adventure.
On Saturday, 1/8/22, I went to a card show in the morning and then to a card shop in the afternoon. I made my way to The Batter's Box card shop just before 3 pm, hoping there would be an auction at 3 pm. They used to have two auctions on Saturday (1 pm and 3 pm), but since Covid they now rotate. So one Saturday it will be at 1 pm and then the next Saturday it will be at 3 pm. They also have a Wednesday night auction as well. That one has remained every Wednesday night at 6:30 pm. Pretty sure I've talked about their auctions before, but they have 40 items for each auction. These are either items provided by the shop owners or anyone can do consignment and sell through the auction.
The items are out on display for a week (or now two weeks for the Saturday auctions) prior and people can write in bids. Once the live auction starts they read the highest write in bid and it goes from there. The items will include everything from single cards to sets, lots, packs, occasionally unopened boxes, books, autographed items, used supplies, etc.
Turns out they held both auctions on this particular Saturday, but they announced they were going back to the every other Saturday format starting next Saturday. I arrived a few minutes before the auction started so I took a few minutes to look at the bid board beforehand. There were a couple items that caught my eye, but I knew were going to be out of my price range. One was a 1919 -192 W514 Ty Cobb strip card, like the one shown below. The one in the auction was not graded, but was in worse condition that this one. 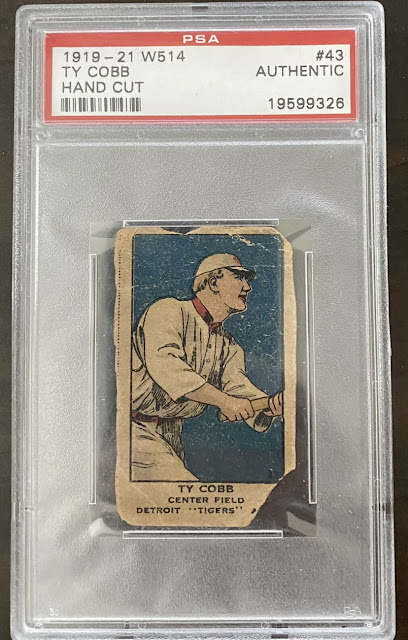 Regardless of the condition, still a very old and rare card of one of baseball's all-time greats. The card ended up going for around $450. There were two bidders who wanted it. One was a guy I recognized and the other was someone new that I think just happened to walk in a bit before the auction with his wife and dog. I say this because of the conversation I overheard them having with the owner before the auction started. Most bidders have a bidder's number, but he told them since they didn't have one to just use his name during the auction.
I think the starting write in bid was around $200 so the bidding took a while to get to where it finished. The guys wife was holding her dog and while he husband was bidding she was looking away and just had a nervous smile on her face. Not that she didn't want him to spend the money, but that she was just nervous about the bidding process. Bidding went back and forth and then as it was being announced that the item was sold, the guy whose wife and dog were there raised his hand to bid again, but it was too late. he hesitated too long.
I didn't feel bad for him though because he did win a 1964 Topps Giant Mickey Mantle PSA 7 in the auction for $170, which I think is an absolute steal.
I did put in a couple of write in bids before the auction started. One was on a lot of 1990 Target Dodgers uncut sheets. I think it might have been the complete set, but I wasn't sure. I've seen these cards on Night Owl's blog and so they peaked my interest. I wrote in a $4 bid. When they came up, someone else bid and so I bid again as well a couple of times, but I think I bowed out around $8. Again, not knowing if it was a complete set or not I wasn't willing to take that chance at that price.
The other item I put a write in bid on was a lot of 4 cards from the 1950's. The only card I really paid attention to was the 1955 Topps Ken Boyer rookie card. That is a card I have been looking to pick up. This one wasn't in great shape, but I put in a write in bid of $13.50. Once bidding began it was between me an one other person. We both just kept our hands up as we bid back and forth for a while. I bowed out at $25. Wish I would have paid closer attention to what the other 3 cards were in the lot to see if I should have gone higher.
After I had viewed the items and wrote in my bids I hit up the dime box and grabbed a few cards. Turns out I already have the Bonds card. I know it's only a dime, but just another reason I have got to be more organized. 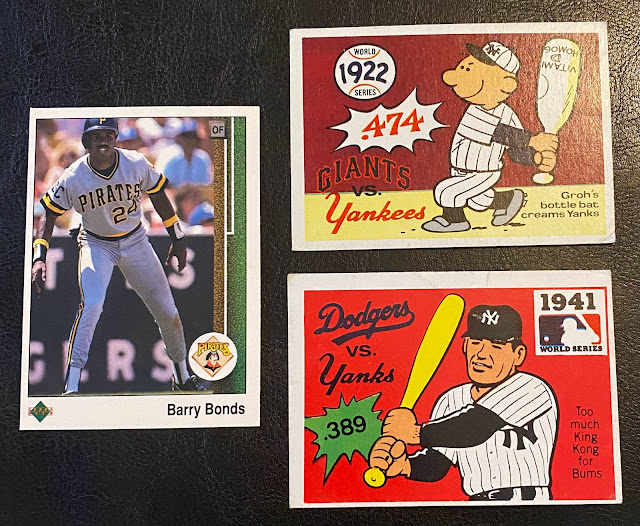 I try to pick up the Laughlin World Series whenever I see them in dime boxes. I'm not sure if these are going to end up being dups or not. Mostly because they are currently scattered throughout my collection. Another reason to get more organized.
There were a lot of people there for the auction. When I say a lot, there were about 15 different bidders. They also do proxy bidding as well. Anyways, once the auction ended everyone lines up to pay for and get there stuff. Many had been too both auctions so I knew it was going to take a while. I decided to just browse while everyone else paid. I found a few Fleer boxed sets and I checked the blog to see if I needed any of them. There were 3 different ones available and the blog showed I needed all 3. $1.50 each, so I grabbed them and put them with the other cards from the dime box.

These will count toward my goal of completing 100 sets in 2022!
While I was browsing and waiting to check out, a man came in looking to sell some cards he had found clearing out a storage unit. There were newer basketball cards. He had one of those hard plastic 8 x 10 screwdown frames that holds 9 cards. The card in the middle was a Topps Steph Curry rookie card. Now I knew his rookie card was valuable, but as I saw the card and overheard him talking with one of the owners I looked it up on eBay. Wow! I was not expecting it to be that high. Well, after about 30 minutes which included them opening up then nine card case and examining the card closely, the card was a fake. It didn't have the foil on the name. At first the guy who wanted to sell it was a bit defensive saying it was probably just a parallel or something, but they showed him online where it showed the counterfeit card and then he calmed down. I get it though. He thought he had a $1000 card and just a few minutes later it's worth nothing.
I paid and left, spending a total of $4.80. I was hoping they might have a nice HOF rookie card I needed in the $30-$40 range, but the ones they had I already owned or they were out of my current price range. But it was still a fun Card Shop Adventure.
Posted by Daniel Wilson at 3:00 AM