Yesterday I went to a card show in Phoenix. One of the dealers had posted on Facebook that he would be bringing a 3200 count box of dime cards to the show. He posted a couple pictures and on of the cards was an Emotion Barry Bonds card. I was pretty sure I didn’t have that card and so I was determined to look through the box and see if I could get that and any other Bonds cards I need as I continue my quest to get 762 unique Bonds cards.
I arrived at the show shortly after it opened at 9 AM. There was already two people looking through that dime box so I patiently waited my turn. I looked through a couple of the other boxes at that dealers table while I waited. I found a few cards that I needed, or at least thought I needed. 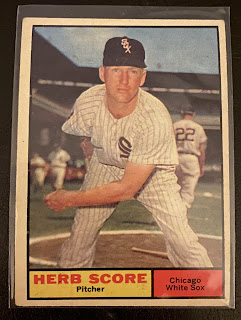 As soon as one of the guys looking through the dime box left I moved in and began digging through and finding a bunch of great cards including 26 Barry Bonds cards. I ended up with 123 cards from the dime box. 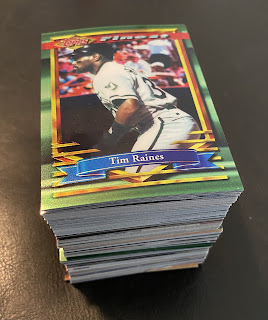 So for the one Score and three Moon cards plus the 123 cards from the dime box I paid $20.
I found another booth that had some bonds cards and I was able to get nine from there so total I bought 35 Barry Bonds cards. 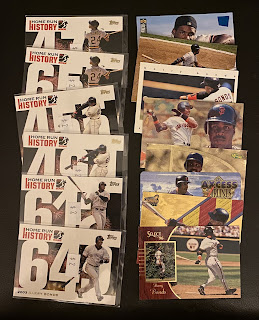 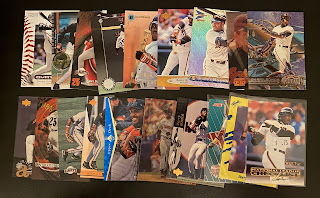 I ended up needing 33 out of the 35 cards. Shown above are the 33 cards that I was able to add to my Barry Bonds collection. This Puts me past 500 as I now have 505 unique Barry Bonds cards. Only 257 cards to go to reach 762.
I browsed looking for some vintage nice vintage at affordable prices, but didn’t have any luck at finding what I wanted. I was looking for a 1955 Topps Hank Aaron, But didn’t see any. I did find a 1954 Topps Ernie Banks rookie card but it was a PSA 3 and they wanted $1200 for it so it was a bit out of my price range.
At the last booth before I left I was waiting to go through a 2/$1 box and the dealer handed me a $2 box to go through while I waited. I found these nine cards and offered $15 and he accepted. 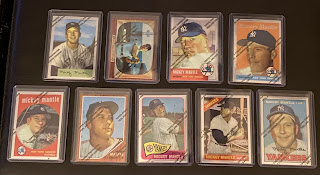 I have the regular versions of these but did not have the Chrome version so I went ahead and picked these up.
When I was able to go through the 2/$1 box I found a couple of Cards that peaked my interest. 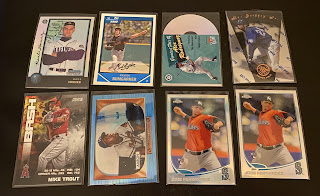 Overall, it was a good show. Well attended. Again, I just wish there was more vintage.
After the show I went to a card shop and then went to my sons flag football game. I got a card delivered via FedEx. Later that afternoon I went to another card shop. I’ll have posts for each of these experiences.
How about you? Did you do anything card related yesterday? Attend any card shows or go to any card shops?
Posted by Daniel Wilson at 6:33 AM