I mentioned in a previous post that I went to a card show a couple of weeks ago and I bought some vintage pages. I ended up getting them for the 5/$15 price, or $3 each. I showed each of the baseball pages I purchased and then I showed a stack of pages with 1980-81 Topps basketball cards that I bought. There ended up being 27 pages. 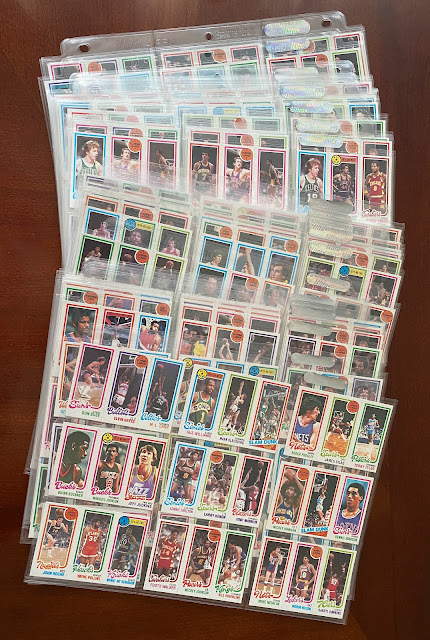 Let me start by saying that there were no big superstars among these cards, but there was a lot of star power. So no Magic or Bird rookies. No Kareem or Maravich cards. There was one Dr. J Slam Dunk card, but no base or All-Star card of Erving. Magic has his rookie card and an All-Star card. Bird has a rookie card and two other team leader cards. So one set contains 5 Magic and Bird cards from their rookie year.
I also want to point out that if you see "card" or "cards" in quotation marks I am referring to a three card panel. If I just have card or cards, then it would be referring to the individual one player panel or card.
With that out of the way. This set is INSANE. Okay. It's not really the set, but putting the set together is INSANE. Like it took me two days to get a grasp on this set and put them in order and come up with the cards I needed.
Let me explain. The cards come in panels of three, with each individual card being numbered, but the cards are not in numerical order. Let me show you an example. 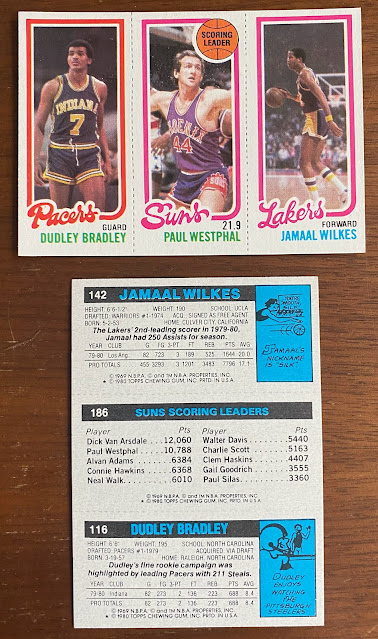 So this "card" is actually three different cards. The cards were meant to be separated. Again the numbers of the individual cards on each three card panel are not consecutive. This "card" contains card numbers 142, 186, and 116.
The set contains 264 cards, which can be made with just 88 three card panels. If you were going to separate the cards out and collect the 264 card set that way, it wouldn't be that bad although I would have to carefully separate all these cards and undoubtedly some of them would probably get damaged. Because of this the cards that are the panels of three cards are more collected and valued. Most card collectors, even if you primarily collect baseball are probably familiar with the three card panel that contains the Magic Johnson rookie, the Dr. J Scoring Leader card, and the Larry Bird rookie. This card, intact, is worth a great deal more than the individual cards combined.
Alright, back to the cards I purchased. 27 sheets of 9 cards. So I ended up with 243 "cards". Each of these "cards" is a panel of 3 cards, so there were actually 729 individual cards. Remember the set is only 264 cards, so in theory, I could have almost 3 sets. But almost all of the superstar cards were missing, so I didn't even end up with one full set, but that's okay.
I probably should break the cards apart and just go after one set of 264 individual cards because that is likely the only way I'll be able to afford the Magic and Bird cards, but since I ended up with so many of these cards intact I decided I would collect the set that way. The problem is, the "cards" (panels of three) were each printed with two different versions. Let me show you an example.
Here you see a two "cards" that contains cards of Jamaal Wilkes and Paul Westphal, but the third card of the panel is different. One contains a card of Dave Cowens and the other, a card of Dudley Bradley. 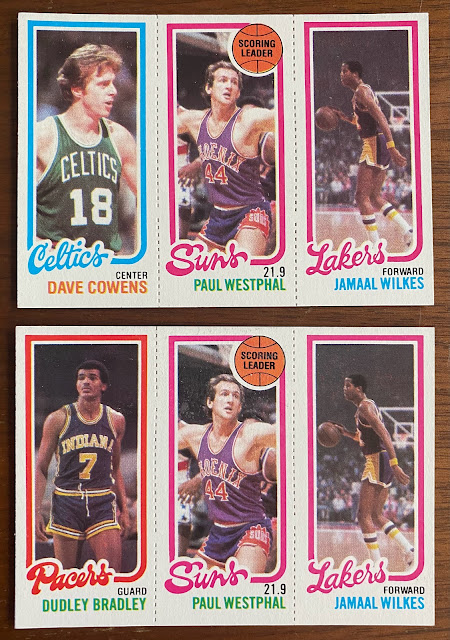 The entire set is like this. Two of the same players and then a different player. So in a weird way, there are two versions of each "card". Having each of both "cards" would give you two complete sets of 246 individual cards. 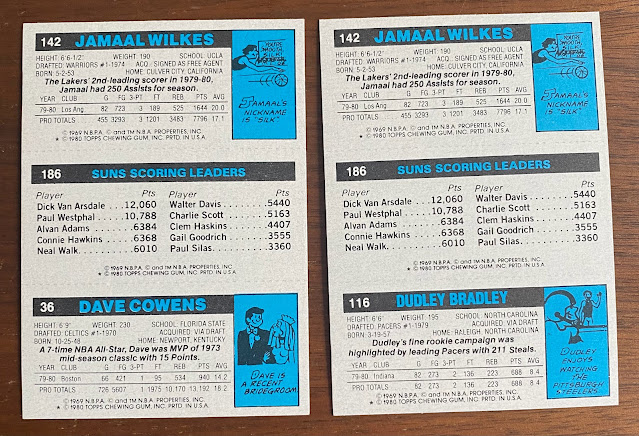