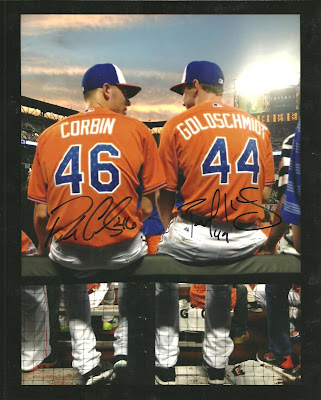 After getting Patrick Corbin to sign this picture on Wednesday, I was able to get Paul Goldschmidt to sign it tonight. I think it turned out amazing!

I didn't think it was going to happen tonight because we used a babysitter for our youngest and when we do that we usually don't leave early enough to get autographs. We got to the ballpark about 6:25 pm for a 6:40 pm start. Our seats were in the upper level, so when the usher asked to see our tickets I asked if we could just go down to try to get autographs. I was somewhat surprised that he said okay since it was so close to game time. When we got there the players were just finishing stretching and then they had the National Anthem. Only one player came over to sign autographs and it was Goldschmidt. He signed for probably about 20 people and gave me a great signature (it's more than his normal signature)!

We stayed until the top of the 8th. The D-Backs ended up losing to the Giants 1 -0, but I couldn't be happier about getting Goldschmidt to sign the picture!
Posted by Daniel Wilson at 10:19 PM