While the guy I bought the collection from appears to have been a member of the Stadium Club in 1991, other than the Charter Member and Members Only cards, he only had 5 pages in a binder filled with Series I from that year. He had two of the more iconic cards though from the set, so that was nice. Previously I had selected a binder page from 1991 Stadium Club Series II, so it worked out nicely that all his cards were from Series I.

Stadium Club was revolutionary back in 1991 and I don't remember being able to afford much of it. They were the first borderless cards to my knowledge and the photo quality and gloss were just next level. Then they took a couple of photos of two big name pitchers in tuxedos and put it on cards and collectors everywhere went crazy! I remember that card being hard to find and selling for between $5 - $10 easy.

I picked out my 9 favorite and I'm going to assign it a $1 value since I could probably find most of these in a dime box, maybe not the Nolan Ryan, but I'm going to say $1 for the 9 card lot, so that puts me at $45 so far. 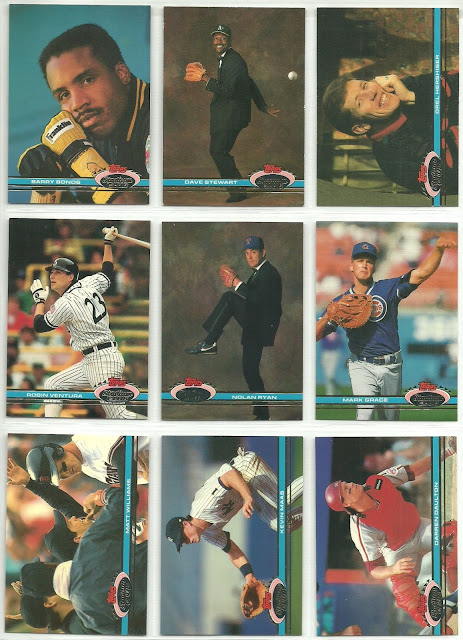