Every once in a while I check Facebook Marketplace for baseball cards, but up until a week ago I'd never actually bought anything. This purchase actually began several weeks ago. A post caught my eye because the photo showed a variety of Topps factory sets.

The seller was asking $200, which isn't a bad deal, but I have some of the sets already so I messaged the lady saying I'd be interested in looking at them at $100. She messaged me right back and said that she already had someone interested at the full price. Fast forward a week or two and I get a message saying I can have them for $100 if I'm still interested. I told her I was and we arranged to meet. 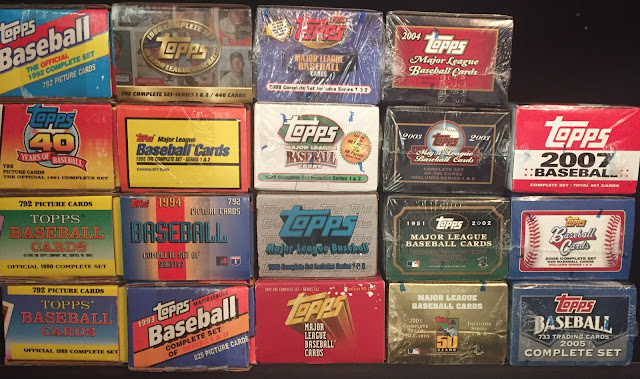 At $100 for 19 complete sets, that works out to $5.26 per set, which is a great deal in my opinion. What I didn't realize was that there were other cards in the collection that came with it.

The lady I purchased the cards from said that her husband had collected cards for a while, but had just lost interest and they were taking up too much space. He must have been around my age, because I feel like the majority of the cards are the same stuff that I collected as a kid.

I'm comfortable with the $100 for the 19 complete sets, so everything else is just a bonus. I'll show off some of the random stuff in my next couple of posts.
Posted by Daniel Wilson at 4:00 AM