I thought I was done posting today, but then I went to the mailbox and found 3 packages with my name on them. Here is an ebay purchase from earlier this week. It is a 1986 Topps Traded Todd Worrell Rookie Card. Actually, I got 8 of them. My winning bid was $0.80 with Free Shipping. Todd won the 1986 national League Rookie of the Year Award. One of my collecting goals is to collect a Rookie Card of every player who has won the Rookie of the Year Award. Since I have 8 of these cards, I scanned the front and back. If anyone is interested in trading, I have 7 extras. 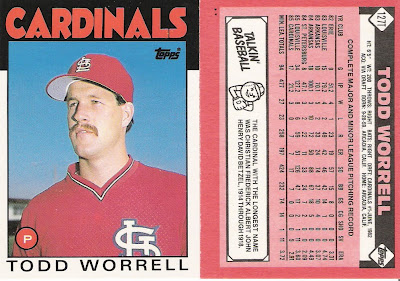 Posted by Daniel Wilson at 2:08 PM