Merry Christmas to myself!

I'm sure I'm not the only one who bought themselves a Christmas present this year. Maybe I'm just the only one willing to admit it. Oh well! I picked these two cards for myself this year on ebay. One arrived Christmas Eve and the other the day after Christmas.


2008 Upper Deck A Piece of History 500 Club bat card of Manny Ramirez - I was watching a few of these on ebay. One auction and several Buy-It-Now's. The one auction ended at $52 and some change, so I jumped on the Buy-It-Now priced at $25 plus $5 shipping. That is the most I have paid for a single card in a long time, but I am trying to get a bat card of every 500 Home Run club member, so I couldn't pass it up. 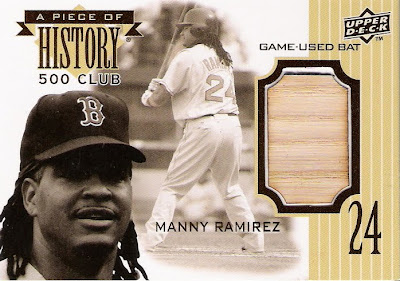 2009 Topps Ticket to Stardom Opening Day Ticket Stub card of Brandon Webb numbered 19/50. - Card features actual ticket stub from 2009 Opening Day, Diamondbacks vs. Colorado Rockies. I had seen this card on ebay and tried to get it once but was outbid at the last second. This time I outbid somebody else at the last second. 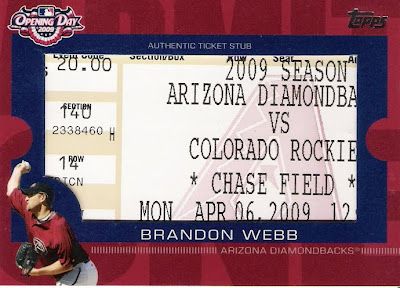