Last week I saw an OfferUp post that had a bunch of boxes of cards for a reasonable price. I reached out right away, but I didn't hear back. A few days later I reached out again to see if they were available. He responded that he had a bunch of people inquire, but they never followed up. I didn't see the message until the next day, but made arrangements for an early Saturday morning pickup.

As you can see, the seller mentioned that they are mostly commons. The part that is missing says "great for completing or starting sets". So I wasn't expecting any hidden gems, but I was certainly intrigued. The newer looking boxes are what caught my eye. I've been organizing my collection recently and thought they could come in handy. Now, unless they are empty, they don't exactly do me any good, but that's okay.
I did negotiate a lower price just because the seller lived a ways away. I ended up getting everything for $30. I was comfortable at that price even with the expectation that they are mostly commons. 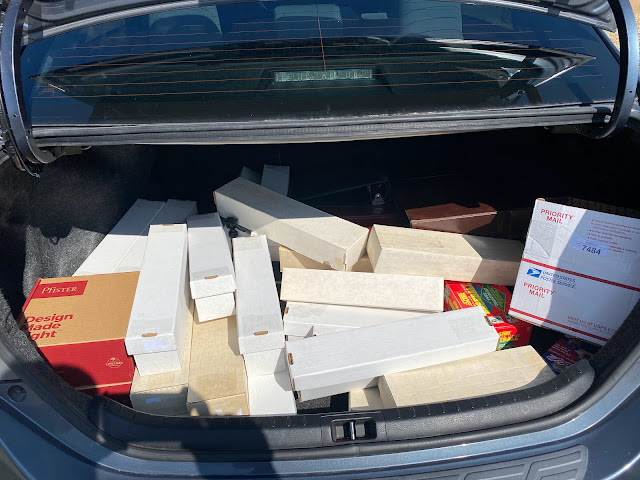 There was a little more than was pictured. Not much, but the was a couple of things. I don't believe the USPS box and the 1991 Score set and one other tin with a Collector's Choice Update set were in the pictures. This is what the collection looks like in my trunk. Not a bad haul. I went through everything briefly. Basically just opened up each box to get an idea of what was inside. There were a few boxes of football cards. There was a bunch of 1979 and 1980 Topps football cards and some other junk wax football cards. There was also a bunch of 1993-94 Fleer basketball cards. These will go to my football/basketball guy that I met through OfferUp. At this point, I think of him as a friend.
The rest was baseball. There is a bunch of 1980 Topps baseball. Enough that I will probably start that set. Right now, I am just doing 1981 - present as well as a few other vintage sets (1970, 1971, and 1973). There are several boxes of 1985 - 87 Topps, Donruss, and Fleer. The other boxes are by brand. So one box with Bowman cards from various Bowman brands and years. Another with Upper Deck. Another with Pacific cards. These are going to be perfect for my goal of having a 9 pocket page of each card se. I know that might seem like a crazy idea, because it is, but it's fun to look at each brand and how they progress year over year. This collection has a lot of brands that I know I don't have already, so that is a huge plus.
It's going to take some time to go through everything and complete organizing my collection, but it will also be a ton of fun.
Posted by Daniel Wilson at 3:00 AM

Email ThisBlogThis!Share to TwitterShare to FacebookShare to Pinterest
Labels: baseball cards, Offer Up