I mentioned a few posts back that I was waiting on some recent ebay purchases. Well today I got them both in the mail. One came in a pwe, but I'll show that one later.

The seller ended up sending me two 2015 Bowman's Best rookie autos instead. I messaged the seller and he apologized and said he must have put the wrong labels on the packages. He said he would contact the other buyer and "hopefully get it all sorted out". Uh, yeah, you had better get it sorted out. 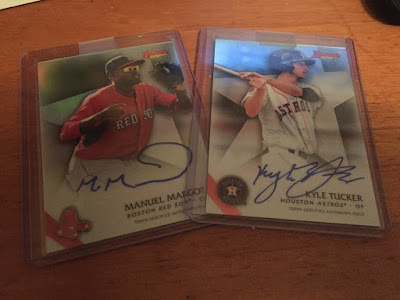 What has been your worst ebay experience?
Posted by Daniel Wilson at 6:39 PM