2 Cards Already In My Personal Collection

One of my 2010 card collecting goals is to add 100 cards to my Personal Collection. Here are 2 cards that are already in my personal collection that I haven't yet featured on my blog.


2004 Donruss World Series Playoffs Souvenirs - Card features Jeff Kent of the San Fransico Giants and a piece of a ball used during Game 3 of the 2002 World Series between the Anaheim Angels and the San Fransico Giants. It is numbered on the back 016/100. I picked this up on ebay a few years ago. I love game specific game-used cards and thought that this was an awesome card. I love the fact that it has part of the stitching on it. 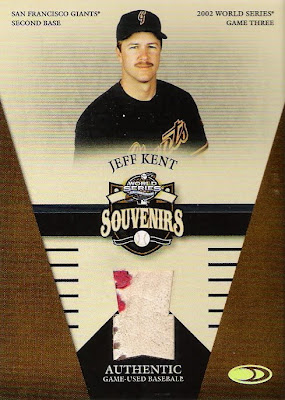 2001 Leaf Rookies & Stars Great American Treasures Magglio Ordonez All-Star Game-Worn Hat  - This insert set features some pretty amazing stuff. This is just about the only card from the set that I could afford. I picked it up on ebay a few years back. This card features a piece of the hat that Magglio Ordonex wore during the 2000 All-Star Game. 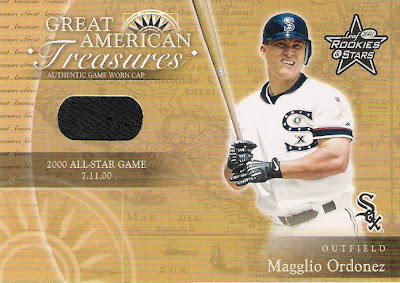 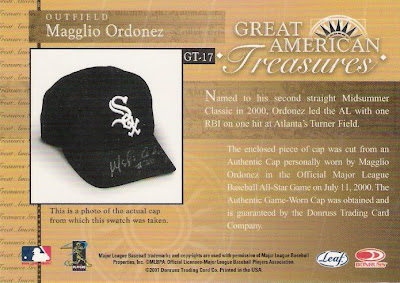 Posted by Daniel Wilson at 8:46 AM