Dave Kingman ended his Major League Baseball career with 442 home runs, but has never been seriously considered for the Baseball Hall of Fame. The 3 time all-star led the league in home runs in 1979 with 48 and in 1982 with 37. He hit 35 home runs for the Oakland A’s in 1986, but Oakland decided not to re-sign him after he sent a live rat to a female sportswriter for the Sacramento Bee newspaper. No other teams offered him a contract and so he retired with the distinction of having the most home runs (35) and RBI’s (94) of any player the season before retiring. For roughly 20 years Kingman also had the distinction of the player with the most home runs not in the Hall of Fame. Jose Canseco and Mark McGwire now both have more home runs than Kingman and are not yet in the Hall of Fame.

Kingman played a whopping 8 games for the 1977 Yankees, yet he was included 2003 Upper Deck Yankees Signature Pride of New York Autographs set. Go figure. True to form though, Kingman belted 4 homers in those 8 games. Not sure exactly where I got this card from. Might have pulled it from a pack or got it on eBay back in 2003. 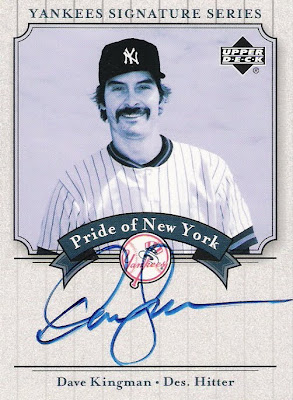 Posted by Daniel Wilson at 8:30 PM