When I was about 12 years old I found out that Mickey Mantle would be coming to a local card show to sign autographs. I wanted to sleep outside the night before so that I would be first in line. My parents didn't think that would be nessecary, but they did agree to take me to the show. My mom and I arrived and asked where to go to get a ticket for Mantle's autograph, but we were told that it was sold out. I was devestated. Trying to console me, my mom asked if I would like to get Don Larsen's autograph, who was also signing at the same show. I knew who Don Larsen was, having read a Reader's Digest article chronicling his mediocre career leading up to the perfect game he threw for the New York Yankees in the 1956 World Series. I should have been thrilled to get the opportunitty to meet a World Series legend and get his autograph, but I was too upset about missing out on meeting the Mick that I declined and we went home. I always regretted not getting Don Larsen's autograph. Roughly 10 years later I came accross this card and had to have it. Not the same as getting to meet him, but at least I have his autograph. 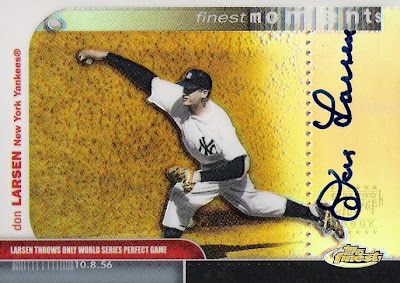 Posted by Daniel Wilson at 6:27 AM