What's better than TTM? Why, an in person autograph of course. Now, I know he's not a baseball player, but it's a baseball card, right? So when I saw in this past Sundays Arizona Republic newspaper that Kevin Van Dam would be at the Bass Pro Shops in Mesa signing autographs today, I remembered that I had pulled this card out of a box of 2008 Allen & Ginter last year. I couldn't resist. So I packed up the kids, picked up my Dad and we headed over to the Bass Pro Shops store. 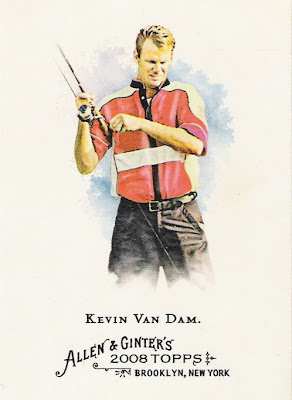 He was supposed to be signing between 3:30 and 4:30 pm, but we got there about 3 o'clock and he was already signing. I waited in line for maybe 5 minutes before having him sign my card. Honestly I had never even heard of him before getting this card, but his resume is impressive. From the back of the card we learn that Kevin earned the B.A.S.S. Angler of the Year Award three times during the 90's. He won the Bassmaster Classic in 2001 and 2005 and has also been ESPN's Outdoor Sportsman of the Year. I may not know anything about fishing, but I know that he is talented at what he does. He was also very nice. Thanks for the autograph Kevin! 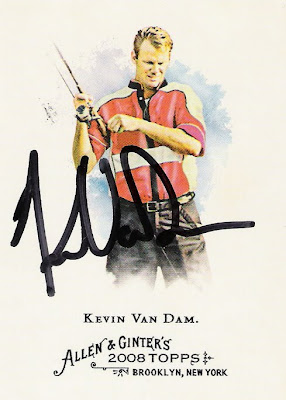 Posted by Daniel Wilson at 5:41 PM