This almost made one of my "Cards so cool...I don't have to write anything!" posts, but I wanted to write about it, so I came up with a different title, "What a baseball card should look like!" I've mentioned before that I like game-used cards that are from a specifc event or game. In 1997 Upper Deck used that same concept and told you when the picture on the card was taken and what was happening. Check out this 1997 Upper Deck Bernard Gilkey card. The bottom of the photo reads "Celebrating with Lance Johnson after homer 4-3-96". I think that it's a great photo and now I know exactly when it's from and what happened. The back of the card features another awesome photo of Gilkey in the outfield trying to make what would be an amazing catch. It's also loaded with stats and facts about Gilkey. In my opinion, this is what a baseball card should look like! 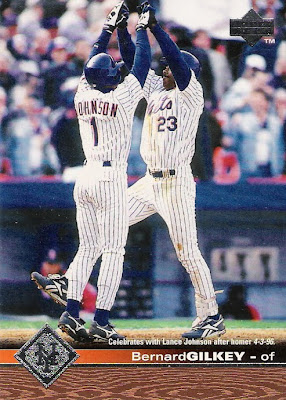 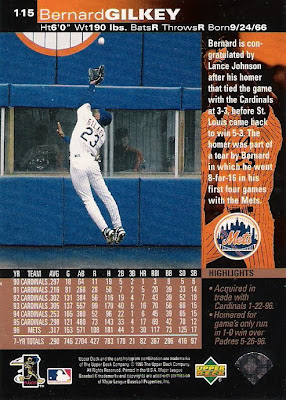 Posted by Daniel Wilson at 9:07 AM