Trip to the Card Shop

I went to the card shop today with the hopes of working on my 2010 card collecting goals. I only had $8 cash though, and the card shop is sort of picky about running a credit card for smaller purchases, so I was somewhat limited on what I could get. I picked up a 2008 Stadium Club Elliot Johnson autographed Rookie Card for Paul of Carl Crawford Cards and then I picked up a numbered Carl Crawford card with The Collective Troll in mind. I also needed a package of top loaders, so I didn't have much to money to spare, but I was able to pick up this card to add to my personal collection. Now only 99 more to go for one of 2010 card collecting goals. 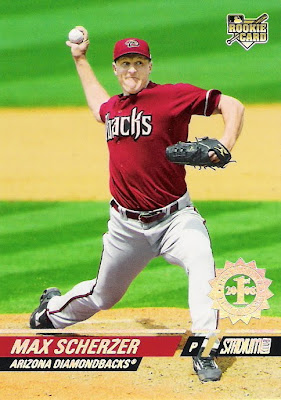 I've started to accumulate a nice little Max Scherzer collection and I thought this would be a nice addition, even though he's no longer a Diamondback.

Posted by Daniel Wilson at 9:39 PM