What was Upper Deck thinking?

In 1999 Upper Deck put out a set called Century Legends in which they included the top 50 players all time and the top 50 contemporaries. Tom Glavine was ranked #21 out of the top 50 contemporaries. His card from that set is shown below. Why would Upper Deck choose this photo of Glavine? Glavine is a pitcher. He's being recognized for his accomplishments as a pitcher, not as a hitter. What was Upper Deck thinking? To make matters worse the back of the card features a small picture of Glavine, and guess what he's doing? Bunting. 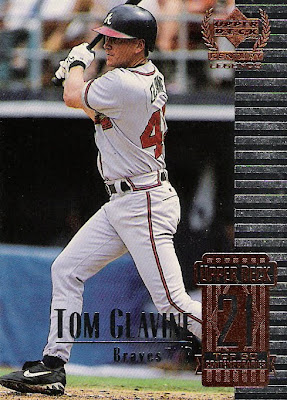 Posted by Daniel Wilson at 9:20 AM